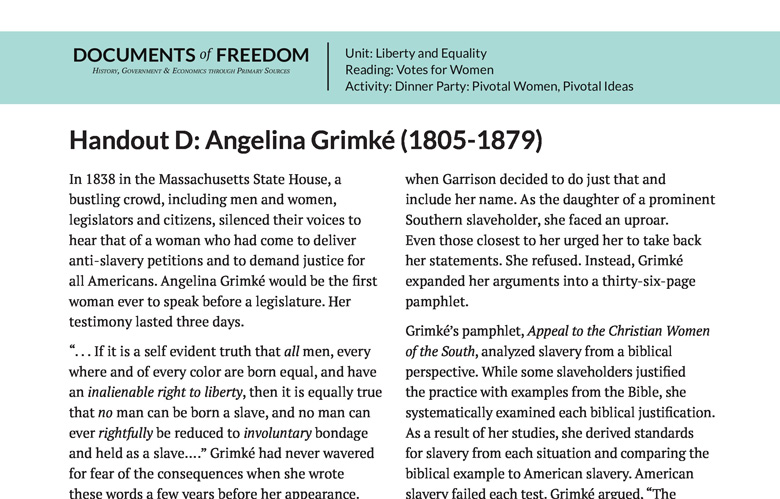 In 1838 in the Massachusetts State House, a bustling crowd, including men and women, legislators and citizens, silenced their voices to hear that of a woman who had come to deliver anti-slavery petitions and to demand justice for all Americans. Angelina Grimké would be the first woman ever to speak before a legislature. Her testimony lasted three days.

“. . . If it is a self evident truth that all men, every where and of every color are born equal, and have an inalienable right to liberty, then it is equally true that no man can be born a slave, and no man can ever rightfully be reduced to involuntary bondage and held as a slave….” Grimké had never wavered for fear of the consequences when she wrote these words a few years before her appearance. She had grown accustomed to holding unpopular views and was adamant in her pursuit of justice, despite criticism from family, friends, and fellow Southerners.

The daughter of a prominent judge and plantation owner, Grimké grew up in South Carolina and witnessed firsthand the cruelties of slavery. As she grew older, her condemnation of the practice deepened. In 1829 at the age of twenty-four, she moved to Philadelphia to join her older sister, Sarah, in the Society of Friends (Quakers). Together, they began a lifelong mission to expose the injustices of slavery.

In 1835, Grimké inadvertently found herself in the national spotlight. She had written a letter to William Lloyd Garrison, the editor of The Liberator, an abolitionist publication. In her letter, she vigorously and eloquently supported Garrison’s anti-slavery efforts, never intending that the letter be published. She was shocked when Garrison decided to do just that and include her name. As the daughter of a prominent Southern slaveholder, she faced an uproar. Even those closest to her urged her to take back her statements. She refused. Instead, Grimké expanded her arguments into a thirty-six-page pamphlet.

Grimké’s pamphlet, Appeal to the Christian Women of the South, analyzed slavery from a biblical perspective. While some slaveholders justified the practice with examples from the Bible, she systematically examined each biblical justification. As a result of her studies, she derived standards for slavery from each situation and comparing the biblical example to American slavery. American slavery failed each test. Grimké argued, “The attributes of justice and mercy are shadowed out in the Hebrew code; those of injustice and cruelty, in the Code Noir of America.”

Grimké understood that women felt powerless to change things since they could not vote, but she believed that women could effect change in other ways. She pleaded with Southern Christian women, “What can I say more, my friends, to induce you to set your hands, and heads, and hearts, to this great work of justice and mercy.” Women could read, pray, speak, and act on the subject. She suggested they teach their slaves to read and write and to set them free if possible. She admitted that such actions were against the law but claimed, “such wicked laws ought to be no barrier in the way of your duty.”

Determined to inspire action, Grimké declared, “But you will perhaps say, such a course of conduct would inevitably expose us to great suffering. Yes! My Christian friends, I believe it would, but this will not excuse you or anyone else for the neglect of duty.” She referred to the prophets who were tortured and killed “because they exposed and openly rebuked public sins; they opposed public opinion; had they held their peace, they all might have lived in ease and died in favor with a wicked generation.”

Grimké anticipated the protests and questions and reminded her audience of an example from the Old Testament: “Who was chosen to deliver the whole Jewish nation from that murderous decree of Persia’s King, which wicked Haman had obtained by calumny and fraud? It was a woman; Esther the Queen; yes, weak and trembling woman was the instrument appointed by God, to reverse the bloody mandate of the eastern monarch, and save the whole visible church from destruction.”

The pamphlet brought Grimké nationwide recognition as well as scathing criticism. She and her sister, Sarah, began lecturing in New England in the late 1830s. They traveled to more than sixty-seven towns, conveying the shocking details of the slavery system they witnessed as children. Sometimes they lectured from the pulpit. Many times, their words were met with violence. They were pelted with vegetables and faced angry crowds throwing rocks. Resolutely, they believed that nothing they could suffer would compare to what those who were bound by slavery endured. The Northern audiences grew as the lectures attracted more and more abolitionists, both men and women.

In a time when women did not speak in front of mixed audiences, Grimké’s lectures caused a stir across the North. Some pastors balked, and many people were scandalized. In 1837, a “Pastoral Letter” was published; it barred women from speaking from the pulpit in churches. Grimké now found herself an outsider in both the North and the South.

Such opposition only strengthened Grimké’s resolve to fight injustice on all fronts. In addition to her work against the injustices of slavery, she served as one of the first women’s rights advocates. She believed that all human beings deserve equal treatment. As part of her work, she understood that education paved the way for change. To affect the next generation, the Grimké sisters opened a school in New Jersey. They were among the first to accept girls and boys as students, an unusual practice in the 1840s. She continued her work in education throughout the Civil War.

For thirty-one years, Angelina Grimké lived in the spotlight of the abolitionist movement. Her contributions to the movements for equal rights, equal treatment, and equal justice for all are still felt today. She refused to accept the social norm, and, instead, relied upon her understanding of the Declaration of Independence, the Constitution, and the Bible to guide her principles. Grimké broke out of the mold of the proper Southern woman and dared to declare her belief that slavery was wrong. She devoted her life to seeking justice for all human beings and led the way for others to do the same.