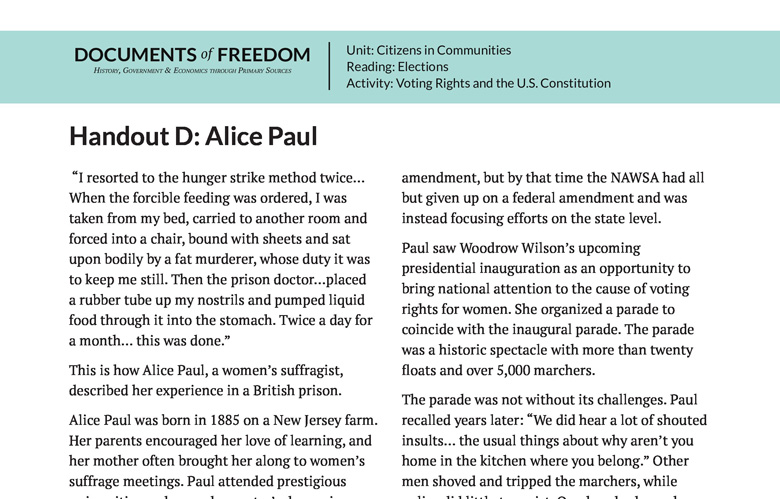 “I resorted to the hunger strike method twice… When the forcible feeding was ordered, I was taken from my bed, carried to another room and forced into a chair, bound with sheets and sat upon bodily by a fat murderer, whose duty it was to keep me still. Then the prison doctor…placed a rubber tube up my nostrils and pumped liquid food through it into the stomach. Twice a day for a month… this was done.”

This is how Alice Paul, a women’s suffragist, described her experience in a British prison.

Alice Paul was born in 1885 on a New Jersey farm. Her parents encouraged her love of learning, and her mother often brought her along to women’s suffrage meetings. Paul attended prestigious universities and earned a master’s degree in sociology. In 1907, Paul moved to England where she continued her studies in economics and political science.

While in England, Paul joined a group working to win voting rights for women in Britain. She was arrested three times while attending demonstrations. In prison, Paul and her fellow activists began hunger strikes to bring attention to their imprisonment. British authorities force-fed the women by putting tubes down their through their nostrils. They would often vomit through the violent process.

When Paul came back to the U.S. in 1910, she turned her attention to the fight for women’s suffrage in America. She wrote her Ph.D. dissertation on the legal position of women in Pennsylvania. She joined the National American Woman Suffrage Association (NAWSA) and chaired the committee working for a federal amendment, but by that time the NAWSA had all but given up on a federal amendment and was instead focusing efforts on the state level.

Paul saw Woodrow Wilson’s upcoming presidential inauguration as an opportunity to bring national attention to the cause of voting rights for women. She organized a parade to coincide with the inaugural parade. The parade was a historic spectacle with more than twenty floats and over 5,000 marchers.

The parade was not without its challenges. Paul recalled years later: “We did hear a lot of shouted insults… the usual things about why aren’t you home in the kitchen where you belong.” Other men shoved and tripped the marchers, while police did little to assist. One hundred marchers were taken to the hospital.

Paul went to the White House two weeks after the parade to talk to Wilson. The President promised to give the idea of voting rights for women his “most careful consideration,” but this promise did little to satisfy Paul and the suffragists.

Paul soon grew frustrated by NAWSA, finding the group’s efforts to be disorganized and inadequate, and in 1913 founded her own suffrage organization. It would be called the National Woman’s Party. Noting that she did not look at all like a political agitator, the Chicago Tribune described her as a “delicate slip of a girl.” But “Miss Paul,” as she preferred to be called, was in fact an agitator of the most effective kind.

Paul began to organize demonstrations and parades in support of women’s suffrage. She wrote and distributed leaflets, and she organized daily pickets in front of the White House. The picket signs addressed Wilson directly and used his own words to make their case, “Mr. President, you say liberty is the fundamental demand of the human spirit,” and “Mr. President, how long must women wait for liberty?” Demonstrators burned Wilson’s copies of his speeches, calling them “meaningless words” on democracy. They even burned an effigy of Wilson at the White House gates.

Unlike NAWSA, Paul’s party did not suspend their efforts during World War I. They believed World War I made women’s suffrage even more vital. The war was being fought “so that democracies may be safe,” as Wilson said, but the suffragists claimed the United States was itself not a democracy, as twenty million women were without the means for self-government.

Growing frustrated, police announced that picketers would be given six months in prison. The next day, October 17, 1917, Paul defiantly led a march to the White House. The marchers, including Paul, were sentenced to six months in jail.

During her sentence in Virginia, Paul was placed in solitary confinement. Her diet of bread and water weakened her so much that she was taken to the prison hospital. But instead of eating more, Paul decided to use the strategy she’d learned in England eight years before: a hunger strike. Just as the British had done, prison officials force-fed Paul to prevent her from dying and becoming a martyr for the cause. Paul wrote to a friend of her experience during the forced feeding, describing the constant “cries and shrieks and moans.” She would later explain that the form of non-violent protest was “the strongest weapon left with which to continue… our battle.”

Paul’s actions alienated some who believed the women’s suffragists were becoming too militant. On the other hand, Paul and the 500 others who were arrested for speaking, publishing, peaceably assembling, and petitioning became known as political prisoners, which mobilized their cause. Wilson eventually acknowledged public opinion and ordered the suffragists released from prison.

Paul’s efforts, coupled with NAWSA’s newly focused and effective strategy of lobbying on the local, state, and federal levels, had led the suffragists to victory. Wilson lent his support to the Women’s Suffrage Amendment in January of 1918. Congress approved it within a year and it was ratified by the states in 1920.