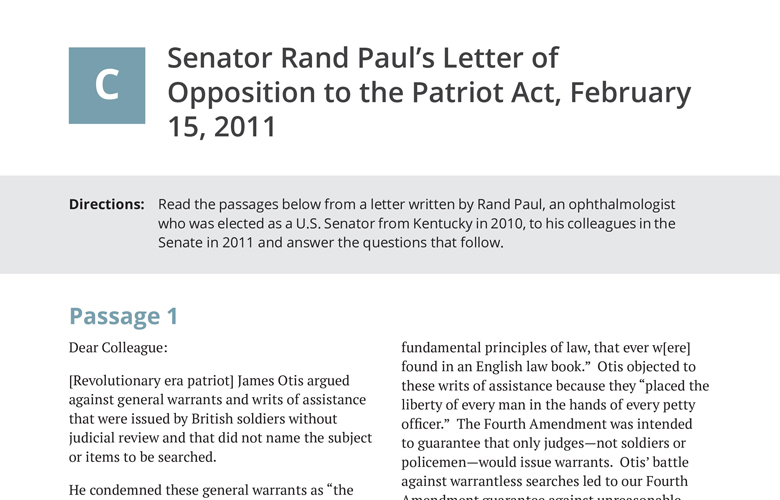 Directions: Read the passages below from a letter written by Rand Paul, an ophthalmologist who was elected as a U.S. Senator from Kentucky in 2010, to his colleagues in the Senate in 2011 and answer the questions that follow.

[Revolutionary era patriot] James Otis argued against general warrants and writs of assistance that were issued by British soldiers without judicial review and that did not name the subject or items to be searched.

He condemned these general warrants as “the worst instrument[s] of arbitrary power, the most destructive of English liberty and the fundamental principles of law, that ever w[ere] found in an English law book.” Otis objected to these writs of assistance because they “placed the liberty of every man in the hands of every petty officer.” The Fourth Amendment was intended to guarantee that only judges—not soldiers or policemen—would issue warrants. Otis’ battle against warrantless searches led to our Fourth Amendment guarantee against unreasonable government intrusion.

My main objection to the Patriot Act is that searches that should require a judge’s warrant are performed with a letter from an FBI agent—a National Security Letter (“NSL”).

I object to over 2 million searches of bank records, called Suspicious Activity Reports, performed on U.S. citizens without a judge’s warrant.

As February 28th approaches, with three provisions of the USA Patriot Act set to expire, it is time to re-consider this question: Do the many provisions of this bill, which were enacted in such haste after 9/11, have an actual basis in our Constitution, and are they even necessary to achieve valid law-enforcement goals?

The USA Patriot Act, passed in the wake of the worst act of terrorism in U.S. history, is no doubt well-intentioned. However, rather than examine what went wrong, and fix the problems, Congress instead hastily passed a long-standing wish list of power grabs like warrantless searches and roving wiretaps. The government greatly expanded its own power, ignoring obvious answers in favor of the permanent expansion of a police state.

It is not acceptable to willfully ignore the most basic provisions of our Constitution—in this case—the Fourth and First Amendments—in the name of “security.”

For example, one of the three provisions set to expire on February 28th—the “library provision,” section 215 of the Patriot Act—allows the government to obtain records from a person or entity by making only the minimal showing of “relevance” to an international terrorism or espionage investigation. This provision also imposes a year-long nondisclosure, or “gag” order. “Relevance” is a far cry from the Fourth Amendment’s requirement of probable cause. Likewise, the “roving wiretap” provision, section 206 of the Patriot Act, which is also scheduled to expire on the 28th, does not comply with the Fourth Amendment. This provision makes possible “John Doe roving wiretaps,” which do not require the government to name the target of the wiretap, nor to identify the specific place or facility to be monitored. This bears an uncanny resemblance to the Writs of Assistance fought against by Otis and the American colonists.

Other provisions of the Patriot Act previously made permanent and not scheduled to expire present even greater concerns. These include the use and abuse by the FBI of so-called National Security Letters. These secret demand letters, which allow the government to obtain financial records and other sensitive information held by Internet Service Providers, banks, credit companies, and telephone carriers—all without appropriate judicial oversight—also impose a gag order on recipients.

NSL abuse has been and likely continues to be rampant. The widely-circulated 2007 report issued by the Inspector General from the Department of Justice documents “widespread and serious misuse of the FBI’s national security letter authorities. In many instances, the FBI’s misuse of national security letters violated NSL statutes, Attorney General Guidelines, or the FBI’s own internal policies.” Another audit released in 2008 revealed similar abuses, including the fact that the FBI had issued inappropriate “blanket NSLs” that did not comply with FBI policy, and which allowed the FBI to obtain data on 3,860 telephone numbers by issuing only eleven “blanket NSLs.” The 2008 audit also confirmed that the FBI increasingly used NSLs to seek information on U.S. citizens. From 2003 to 2006, almost 200,000 NSL requests were issued. In 2006 alone, almost 60% of the 49,425 requests were issued specifically for investigations of U.S. citizens or legal aliens. In addition, First Amendment advocates should be concerned about an especially troubling aspect of the 2008 audit, which documented a situation in which the FBI applied to the United States Foreign Intelligence Surveillance Court (FISC) to obtain a section 215 order. The Court denied the order on First Amendment grounds. Not to be deterred, the FBI simply used an NSL to obtain the same information.

A recent report released by the Electronic Frontier Foundation (“EFF”) entitled, “Patterns of Misconduct: FBI Intelligence Violations from 2001-2008,” documents further NSL abuse. EFF estimates that, based on the proportion of violations reported to the Intelligence Oversight Board and the FBI’s own statements regarding NSL violations, the actual number of violations that may have occurred since 2001 could approach 40,000 violations of law, Executive Order, and other regulations.

Yet another troublesome (and now permanent) provision of the Patriot Act is the expansion of Suspicious Activity Reports. Sections 356 and 359 expanded the types of financial institutions required to file reports under the Bank Secrecy Act. The personal and account information required by the reports is turned over to the Treasury Department and the FBI. In 2000, there were only 163,184 reports filed. By 2007, this had increased to 1,250,439. Again, as with NSLs, there is a complete lack of judicial oversight for SARs.

Finally, I wish to remind my colleagues that one of the many ironies of the rush to advance the Patriot Act following 9/11 is the well-documented fact that FBI incompetence caused the failure to search the computer of the alleged 20th hijacker, Zacarias Moussaoui. As FBI agent Coleen Rowley stated, “the FBI headquarters supervisory special agent handling the Moussaoui case ‘seemed to have been consistently almost deliberately thwarting the Minneapolis FBI agents’ efforts” to meet the FISA standard for a search warrant, and therefore no request was ever made for a warrant. Why, then, was the FBI rewarded with such expansive new powers in the aftermath of this institutional failure?

In the words of former Senator Russ Feingold, the only “no” vote against the original version of the Patriot Act,

I call upon each of my Senate colleagues to seriously consider whether the time has come to re-evaluate many—if not all—provisions of the Patriot Act. Our oath to uphold the Constitution demands it.

Note: On May 26, 2011, Congress voted to extend for four years the following provisions that had been set to expire. The House of Representatives vote was 250–153, and the Senate vote was 72–23. Later that same evening, President Obama signed the legislation.