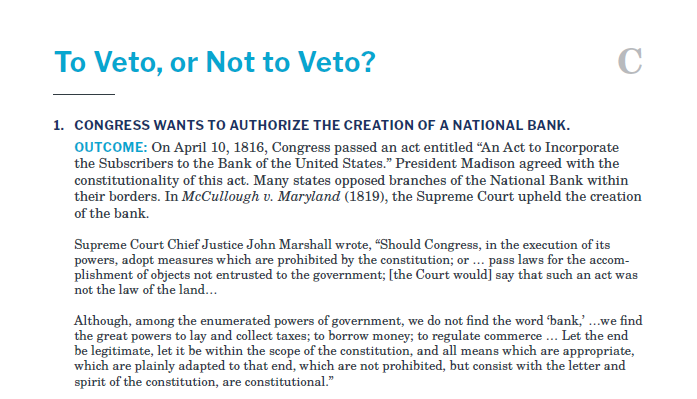 To Veto, or Not to Veto?

1. CONGRESS WANTS TO AUTHORIZE THE CREATION OF A NATIONAL BANK.

OUTCOME: On April 10, 1816, Congress passed an act entitled “An Act to Incorporate the Subscribers to the Bank of the United States.” President Madison agreed with the constitutionality of this act. Many states opposed branches of the National Bank within their borders. In McCullough v. Maryland (1819), the Supreme Court upheld the creation of the bank.

Supreme Court Chief Justice John Marshall wrote, “Should Congress, in the execution of its powers, adopt measures which are prohibited by the constitution; or … pass laws for the accomplishment of objects not entrusted to the government; [the Court would] say that such an act was not the law of the land…

OUTCOME: Congress enacted the Fair Labor Standards Act in 1938, claiming power to do so under the Commerce Clause (Clause 3). It was signed by President Franklin Roosevelt and upheld by the Supreme Court in United States v. Darby (1941).

3. CONGRESS WANTS TO PASS A BILL CREATING “GUN-FREE SCHOOL ZONES,” MAKING IT ILLEGAL TO HAVE A FIREARM IN SCHOOL ZONES.

OUTCOME: Citing its power to regulate interstate commerce, Congress enacted the Gun-Free School Zones Act of 1990 which made it a federal crime to possess a gun in the vicinity of schools. The Act was signed into law by President George H. W. Bush. The Supreme Court struck the law down on the grounds that Congress had exceeded its constitutional authority under the Commerce Clause in US v. Lopez (1995)

4. CONGRESS WANTS TO PASS A LAW CALLED THE CONTROLLED SUBSTANCES ACT. AMONG MANY OTHER REGULATIONS, THE LAW BANS POSSESSION OF MARIJUANA.

OUTCOME: In Gonzalez v. Raich (2005), the Supreme Court upheld the Controlled Substances Act and affirmed the power of the executive branch to ban local use and cultivation of marijuana, even for medical purposes. The Court reasoned, “The [state] exemption for cultivation by patients and caregivers can only increase the supply of marijuana in the California market.” Therefore, the Court argued, the “aggregate impact on the national market” would be “substantial.” Because personal use would substantially affect interstate commerce, the Court held it was within Congress’s power to regulate.