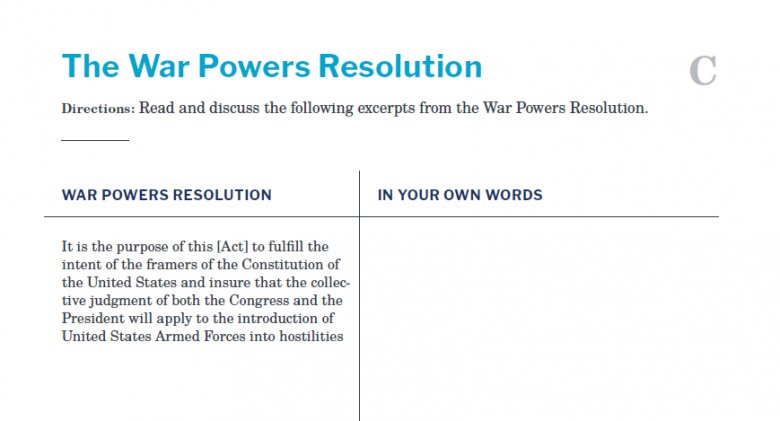 Directions: Read and discuss the following excerpts from the War Powers Resolution.

It is the purpose of this [Act] to fulfill the intent of the framers of the Constitution of the United States and insure that the collective judgment of both the Congress and the President will apply to the introduction of United States Armed Forces into hostilities.

…The constitutional powers of the President as Commander-in-Chief to introduce United States Armed Forces into hostilities, or into situations where imminent involvement in hostilities is clearly indicated by the circumstances, are exercised only pursuant to
(1) a declaration of war,
(2) specific statutory authorization, or
(3) a national emergency created by attack upon the United States, its territories or possessions, or its armed forces…..

In the absence of a declaration of war… the President shall submit within 48 hours to the Speaker of the House of Representatives and to the President pro tempore of the Senate a report, in writing, setting forth-
(A) the circumstances necessitating the introduction of United States Armed Forces;
(B) the constitutional and legislative authority under which such introduction took place; and
(C) the estimated scope and duration of the hostilities or involvement.

[A]t any time that United States Armed Forces are engaged in hostilities outside the territory of the United States, its possessions and territories without a declaration of war or specific statutory authorization, such forces shall be removed by the President if the Congress so directs….