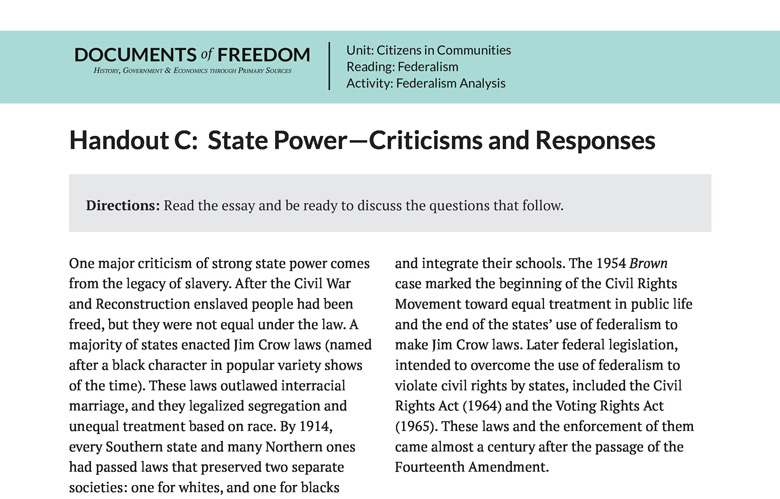 Directions: Read the essay and be ready to discuss the questions that follow.

One major criticism of strong state power comes from the legacy of slavery. After the Civil War and Reconstruction enslaved people had been freed, but they were not equal under the law. A majority of states enacted Jim Crow laws (named after a black character in popular variety shows of the time). These laws outlawed interracial marriage, and they legalized segregation and unequal treatment based on race. By 1914, every Southern state and many Northern ones had passed laws that preserved two separate societies: one for whites, and one for blacks and “non-whites.” Blacks could not use white facilities like restrooms, restaurants, or parks, or even be buried in the same cemeteries as whites. In the case of Plessy v. Ferguson (1896), the Supreme Court upheld separate but equal accommodations. By September 1949, only fifteen U.S. states had no segregation laws.

The National Association for the Advancement of Colored People (NAACP) launched a strategy of challenging these laws in court. The cases eventually made their way to the Supreme Court. The first major legal blow to Jim Crow laws came with the landmark 1954 decision of Brown v. Board of Education. In this case, the Supreme Court found that segregation violated the Equal Protection Clause of the Fourteenth Amendment. This eventually meant that the states would have to follow the directions of the federal government and integrate their schools. The 1954 Brown case marked the beginning of the Civil Rights Movement toward equal treatment in public life and the end of the states’ use of federalism to make Jim Crow laws. Later federal legislation, intended to overcome the use of federalism to violate civil rights by states, included the Civil Rights Act (1964) and the Voting Rights Act (1965). These laws and the enforcement of them came almost a century after the passage of the Fourteenth Amendment.

In response to Jim Crow laws, many argued for increased federal power. They pointed to the legal inequality and violation of natural rights caused by such laws and that a strong federal government could correct such wrongs. They made the case that states often commit wrongful acts and that the federal government is an important force to correct these wrongs.