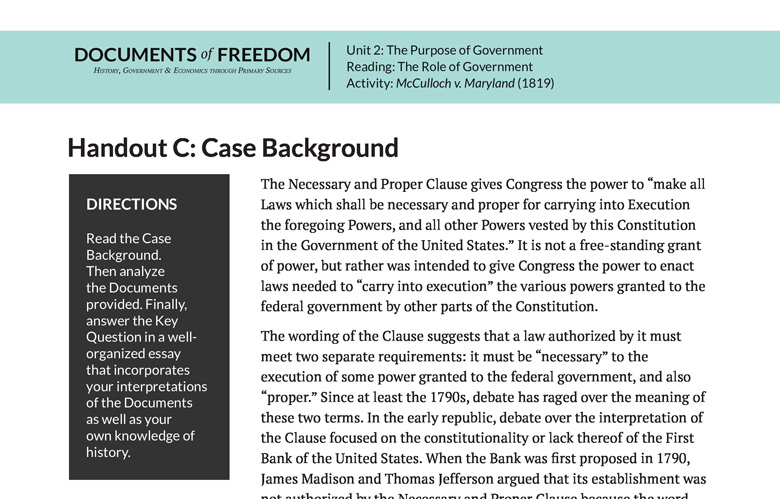 DIRECTIONS: Read the Case Background. Then analyze the Documents provided. Finally, answer the Key Question in a well- organized essay that incorporates your interpretations of the Documents as well as your own knowledge of history.

The Necessary and Proper Clause gives Congress the power to “make all Laws which shall be necessary and proper for carrying into Execution the foregoing Powers, and all other Powers vested by this Constitution in the Government of the United States.” It is not a free-standing grant of power, but rather was intended to give Congress the power to enact laws needed to “carry into execution” the various powers granted to the federal government by other parts of the Constitution.

The wording of the Clause suggests that a law authorized by it must meet two separate requirements: it must be “necessary” to the execution of some power granted to the federal government, and also “proper.” Since at least the 1790s, debate has raged over the meaning of these two terms. In the early republic, debate over the interpretation of the Clause focused on the constitutionality or lack thereof of the First Bank of the United States. When the Bank was first proposed in 1790, James Madison and Thomas Jefferson argued that its establishment was not authorized by the Necessary and Proper Clause because the word “necessary” should be interpreted to include only such measures as are truly essential to the implementation of other federal powers. By contrast, Secretary of the Treasury Alexander Hamilton defended the Bank, arguing that “necessary” should be interpreted to include any law that is “useful” or “convenient.” The issue of the constitutionality of the Bank did not reach the Supreme Court until 1819, when the justices decided the case of McCulloch v. Maryland.

While the Supreme Court has addressed the meaning of the word, “necessary” in a number of cases over time, it has focused far less attention to the meaning of “proper.” Controversy over both terms continues.