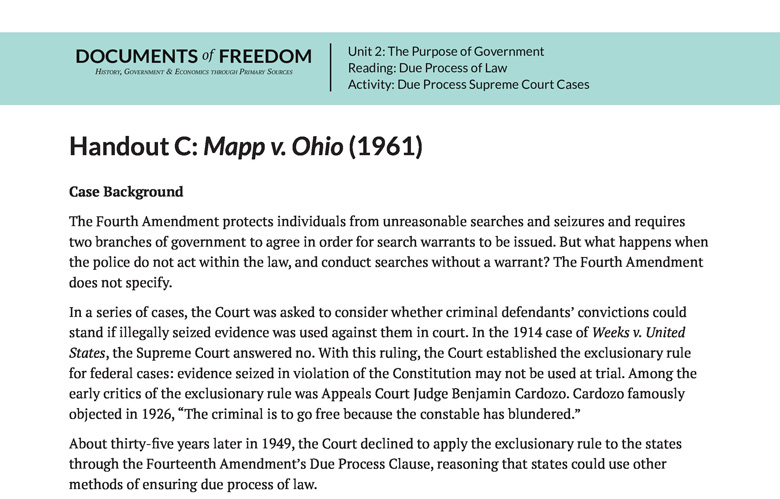 The Fourth Amendment protects individuals from unreasonable searches and seizures and requires two branches of government to agree in order for search warrants to be issued. But what happens when the police do not act within the law, and conduct searches without a warrant? The Fourth Amendment does not specify.

In a series of cases, the Court was asked to consider whether criminal defendants’ convictions could stand if illegally seized evidence was used against them in court. In the 1914 case of Weeks v. United States, the Supreme Court answered no. With this ruling, the Court established the exclusionary rule for federal cases: evidence seized in violation of the Constitution may not be used at trial. Among the early critics of the exclusionary rule was Appeals Court Judge Benjamin Cardozo. Cardozo famously objected in 1926, “The criminal is to go free because the constable has blundered.”

About thirty-five years later in 1949, the Court declined to apply the exclusionary rule to the states through the Fourteenth Amendment’s Due Process Clause, reasoning that states could use other methods of ensuring due process of law.

When Mapp v. Ohio reached the Court in 1961, it was not initially seen as a Fourth Amendment case. Dollree Mapp was convicted under Ohio law for possessing “lewd, lascivious, or obscene material.” Mapp appealed her conviction. She based her claim on First Amendment grounds, saying that she had a right to possess the materials. When the case reached the Supreme Court, however, the Justices did not address her First Amendment claim. The Court instead overturned her conviction because the evidence against her had been seized without a warrant. In so ruling, the Court applied the exclusionary rule to the states. The exclusionary rule remains controversial. Supporters say it ensures liberty and justice, while critics claim it actually threatens those values.

Since the Fourth Amendment’s right of privacy has been declared enforceable against the States through the Due Process Clause of the Fourteenth [Amendment], it is enforceable against them by the same sanction of exclusion as is used against the Federal Government… in extending the substantive protections of due process to all constitutionally unreasonable searches—state or federal—it was logically and constitutionally necessary that the exclusion doctrine—an essential part of the right to privacy—be also insisted upon as an essential ingredient of the right…

[O]ur holding that the exclusionary rule is an essential part of both the Fourth and Fourteenth Amendments is not only the logical dictate of prior cases, but it also makes very good sense. There is no war between the Constitution and common sense.

There are those who say… that under our constitutional exclusionary doctrine “[t]he criminal is to go free because the constable has blundered.” …[And] in some cases this will undoubtedly be the result. But… there is another consideration— the imperative of judicial integrity… The criminal goes free, if he must, but it is the law that sets him free. Nothing can destroy a government more quickly than its failure to observe its own laws, or worse, its disregard of the charter of its own existence.

Our decision, founded on reason and truth, gives to the individual no more than that which the Constitution guarantees him, to the police officer no less than that to which honest law enforcement is entitled, and, to the courts, that judicial integrity so necessary in the true administration of justice.

In this posture of things, I think it fair to say that five members of this Court have simply “reached out” to overrule Wolf… It seems to me that justice might well have been done in this case without overturning a decision on which the administration of criminal law in many of the States has long justifiably relied… I would not impose upon the States this federal exclusionary remedy… Our concern here is not with the desirability of that [exclusionary] rule but only with the question whether the States are Constitutionally free to follow it or not as they themselves determine…