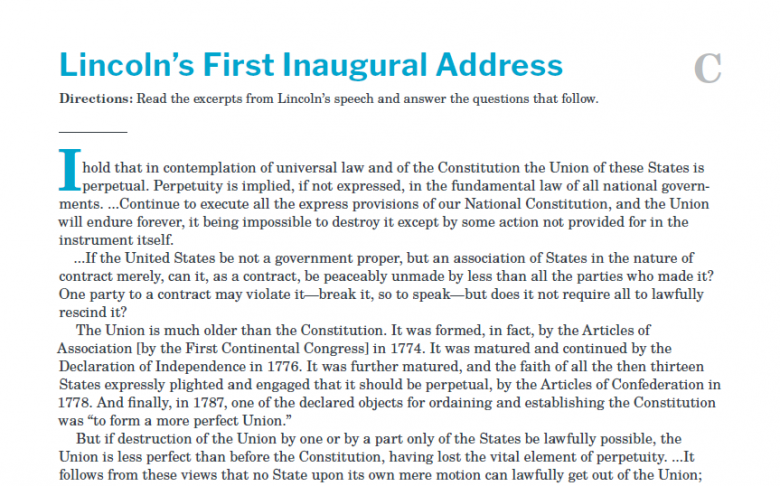 Directions: Read the excerpts from Lincoln’s speech and answer the questions that follow.

I hold that in contemplation of universal law and of the Constitution the Union of these States is perpetual. Perpetuity is implied, if not expressed, in the fundamental law of all national governments. …Continue to execute all the express provisions of our National Constitution, and the Union will endure forever, it being impossible to destroy it except by some action not provided for in the instrument itself.

…If the United States be not a government proper, but an association of States in the nature of contract merely, can it, as a contract, be peaceably unmade by less than all the parties who made it? One party to a contract may violate it—break it, so to speak—but does it not require all to lawfully rescind it?

The Union is much older than the Constitution. It was formed, in fact, by the Articles of Association [by the First Continental Congress] in 1774. It was matured and continued by the Declaration of Independence in 1776. It was further matured, and the faith of all the then thirteen States expressly plighted and engaged that it should be perpetual, by the Articles of Confederation in 1778. And finally, in 1787, one of the declared objects for ordaining and establishing the Constitution was “to form a more perfect Union.”

But if destruction of the Union by one or by a part only of the States be lawfully possible, the Union is less perfect than before the Constitution, having lost the vital element of perpetuity. …It follows from these views that no State upon its own mere motion can lawfully get out of the Union; that resolves and ordinances to that effect are legally void, and that acts of violence within any State or States against the authority of the United States are insurrectionary or revolutionary, according to circumstances.

In your hands, my dissatisfied fellow-countrymen, and not in mine, is the momentous issue of civil war. The Government will not assail you. You can have no conflict without being yourselves the aggressors. You have no oath registered in heaven to destroy the Government, while I shall have the most solemn one to “preserve, protect, and defend” it.