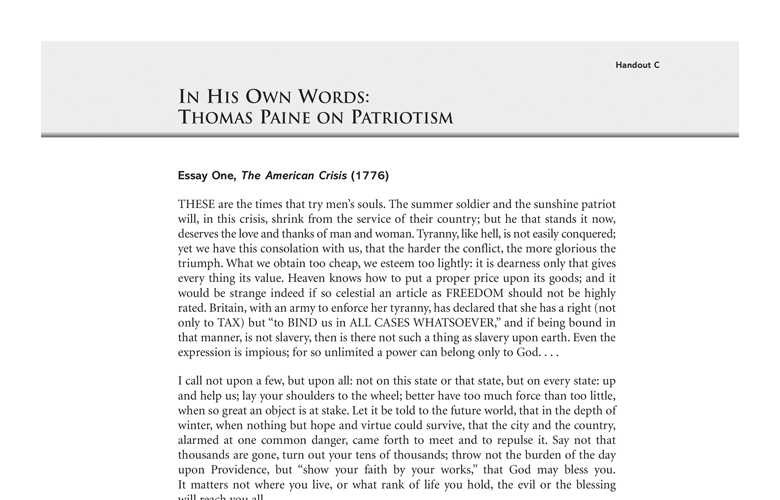 IN HIS OWN WORDS: THOMAS PAINE ON PATRIOTISM

THESE are the times that try men’s souls. The summer soldier and the sunshine patriot will, in this crisis, shrink from the service of their country; but he that stands it now, deserves the love and thanks of man and woman. Tyranny, like hell, is not easily conquered; yet we have this consolation with us, that the harder the conflict, the more glorious the triumph. What we obtain too cheap, we esteem too lightly: it is dearness only that gives every thing its value. Heaven knows how to put a proper price upon its goods; and it would be strange indeed if so celestial an article as FREEDOM should not be highly rated. Britain, with an army to enforce her tyranny, has declared that she has a right (not only to TAX) but “to BIND us in ALL CASES WHATSOEVER,” and if being bound in that manner, is not slavery, then is there not such a thing as slavery upon earth. Even the expression is impious; for so unlimited a power can belong only to God….

I call not upon a few, but upon all: not on this state or that state, but on every state: up and help us; lay your shoulders to the wheel; better have too much force than too little, when so great an object is at stake. Let it be told to the future world, that in the depth of winter, when nothing but hope and virtue could survive, that the city and the country, alarmed at one common danger, came forth to meet and to repulse it. Say not that thousands are gone, turn out your tens of thousands; throw not the burden of the day upon Providence, but “show your faith by your works,” that God may bless you. It matters not where you live, or what rank of life you hold, the evil or the blessing will reach you all. . . .

Let them call me rebel and welcome, I feel no concern from it; but I should suffer the misery of devils, were I to make a whore of my soul by swearing allegiance to one whose character is that of a sottish, stupid, stubborn, worthless, brutish man…. [King George III]

There are cases which cannot be overdone by language, and this is one. There are persons, too, who see not the full extent of the evil which threatens them; they solace themselves with hopes that the enemy, if he succeed, will be merciful. It is the madness of folly, to expect mercy from those who have refused to do justice; and even mercy, where conquest is the object, is only a trick of war; the cunning of the fox is as murderous as the violence of the wolf, and we ought to guard equally against both.