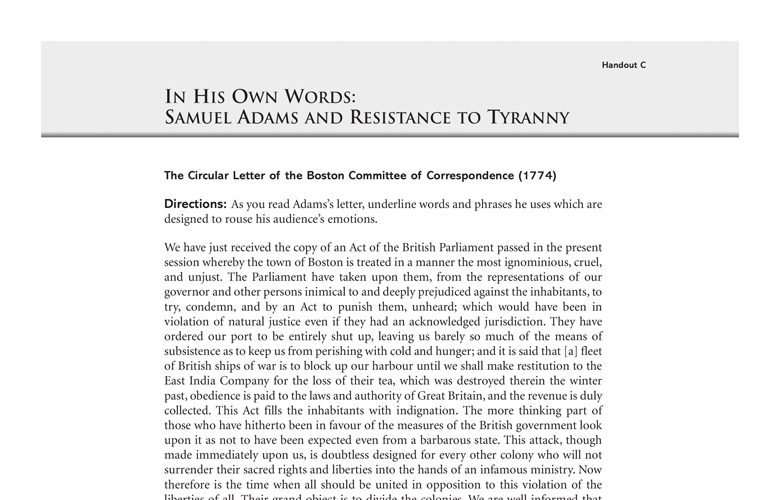 IN HIS OWN WORDS: SAMUEL ADAMS AND RESISTANCE TO TYRANNY

The Circular Letter of the Boston Committee of Correspondence (1774)

Directions: As you read Adams’s letter, underline words and phrases he uses which are designed to rouse his audience’s emotions.

We have just received the copy of an Act of the British Parliament passed in the present session whereby the town of Boston is treated in a manner the most ignominious, cruel, and unjust. The Parliament have taken upon them, from the representations of our governor and other persons inimical to and deeply prejudiced against the inhabitants, to try, condemn, and by an Act to punish them, unheard; which would have been in violation of natural justice even if they had an acknowledged jurisdiction. They have ordered our port to be entirely shut up, leaving us barely so much of the means of subsistence as to keep us from perishing with cold and hunger; and it is said that [a] fleet of British ships of war is to block up our harbour until we shall make restitution to the East India Company for the loss of their tea, which was destroyed therein the winter past, obedience is paid to the laws and authority of Great Britain, and the revenue is duly collected. This Act fills the inhabitants with indignation. The more thinking part of those who have hitherto been in favour of the measures of the British government look upon it as not to have been expected even from a barbarous state. This attack, though made immediately upon us, is doubtless designed for every other colony who will not surrender their sacred rights and liberties into the hands of an infamous ministry. Now therefore is the time when all should be united in opposition to this violation of the liberties of all. Their grand object is to divide the colonies. We are well informed that another bill is to be brought into Parliament to distinguish this from the other colonies by repealing some of the Acts which have been complained of and ease the American trade; but be assured, you will be called upon to surrender your rights if ever they should succeed in their attempts to suppress the spirit of liberty here. The single question then is, whether you consider Boston as now suffering in the common cause, and sensibly feel and resent the injury and affront offered to here. If you do (and we cannot believe otherwise), may we not from your approbation of our former conduct in defense of American liberty, rely on your suspending your trade with Great Britain at least, which it is acknowledged, will be a great but necessary sacrifice to the cause of liberty and will effectually defeat the design of this act of revenge. If this should be done, you will please to consider it will be, though a voluntary suffering, greatly short of what we are called to endure under the immediate hand of tyranny.

We desire your answer by the bearer; and after assuring you that, not in the least intimidated by this inhumane treatment, we are still determined to maintain to the utmost of our abilities the rights of America, we are, gentlemen, Your friends and fellow countrymen.

Source: “The Circular Letter of the Boston Committee of Correspondence (1774).” The Avalon Project at Yale Law School. <https://avalon.law.yale.edu/18th_century/circ_let_boston_1774.asp>.