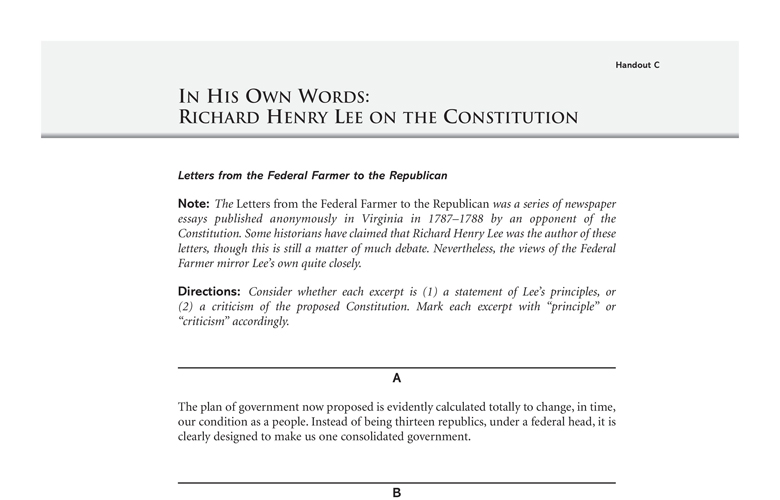 IN HIS OWN WORDS: RICHARD HENRY LEE ON THE CONSTITUTION

Letters from the Federal Farmer to the Republican

Note: The Letters from the Federal Farmer to the Republican was a series of newspaper essays published anonymously in Virginia in 1787–1788 by an opponent of the Constitution. Some historians have claimed that Richard Henry Lee was the author of these letters, though this is still a matter of much debate. Nevertheless, the views of the Federal Farmer mirror Lee’s own quite closely.

Directions: Consider whether each excerpt is (1) a statement of Lee’s principles, or (2) a criticism of the proposed Constitution. Mark each excerpt with “principle” or “criticism” accordingly.

The plan of government now proposed is evidently calculated totally to change, in time, our condition as a people. Instead of being thirteen republics, under a federal head, it is clearly designed to make us one consolidated government.

The essential parts of a free and good government are a full and equal representation of the people in the legislature, and the jury trial of the vicinage in the administration of justice.

There are certain inalienable and fundamental rights, which in forming the social compact, ought to be explicitly ascertained and fixed….These rights should be made the basis of every constitution.

A wise and honest administration can make the people happy under any government; but necessity only can justify even our leaving open avenues to the abuse of power, by wicked, unthinking, or ambitious men.

By this plan there can be no doubt, but that the powers of congress will be complete as to all kinds of taxes whatever.

Liberty, in its genuine sense, is security to enjoy the effects of our honest industry and labors, in a free and mild government.

The supreme power is in the people, and rulers possess only that portion which is expressly given them.

The government [as proposed by the Constitution] will take every occasion to multiply laws, and officers to execute them, considering these as so many necessary props for its own support.

Every man of reflection must see, that the change now proposed, is a transfer of power from the many to the few.