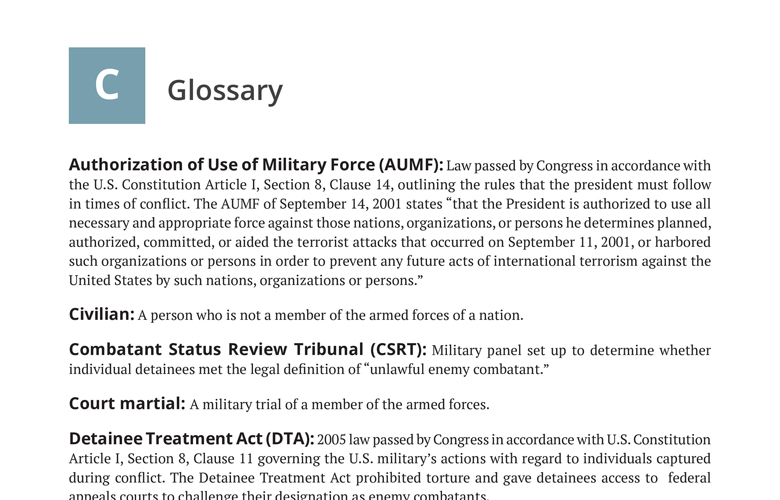 Authorization of Use of Military Force (AUMF): Law passed by Congress in accordance with the U.S. Constitution Article I, Section 8, Clause 14, outlining the rules that the president must follow in times of conflict. The AUMF of September 14, 2001 states “that the President is authorized to use all necessary and appropriate force against those nations, organizations, or persons he determines planned, authorized, committed, or aided the terrorist attacks that occurred on September 11, 2001, or harbored such organizations or persons in order to prevent any future acts of international terrorism against the United States by such nations, organizations or persons.”

Civilian: A person who is not a member of the armed forces of a nation.

Court martial: A military trial of a member of the armed forces.

Detainee Treatment Act (DTA): 2005 law passed by Congress in accordance with U.S. Constitution Article I, Section 8, Clause 11 governing the U.S. military’s actions with regard to individuals captured during conflict. The Detainee Treatment Act prohibited torture and gave detainees access to federal appeals courts to challenge their designation as enemy combatants.

Fair trial: A principle of the rule of law that trials of persons accused of crime must adhere to certain standards that protect the accused against decisions based on error, injustice, and arbitrary rule.

Habeas corpus: Latin for “to have the body;” a centuries-old protection of the accused that guarantees a hearing before a judge who has the power to release a prisoner who is illegally detained.

Habeas statute, 28 U. S. C. §2241: A provision in the United States Code of laws that describes the power of U.S. Supreme Court Justices, appellate judges, and district court judges to grant petitions for writs of habeas corpus.

Law of war: National and international rules that govern conduct of people and countries involved in conflict.

Military Commissions Act (MCA): Law passed by Congress in 2006, in response to the Supreme Court’s ruling in Hamdi v. Rumsfeld. The MCA gave the president authority to try unlawful enemy combatants in military commissions, defined as “regularly constituted courts that afford all the necessary ‘judicial guarantees which are recognized as indispensable by civilized peoples’ for purposes of common Article 3 of the Geneva Conventions.” Guilt had to be proven beyond a reasonable doubt, and convictions required a two-thirds vote. Court procedures were based on courts-martial rules, but could be revised by the secretary of defense. While torture was prohibited, interrogation techniques such as waterboarding and sleep deprivation were not considered torture. Also, under MCA, detainees no longer had access to habeas corpus protections in U.S. federal court. In 2009, President Obama halted military commission hearings in order to review all Guantanamo detainee cases. The MCA of 2009 was enacted in response to the Supreme Court decision in Boumediene v. Bush (2008), and provided new procedural safeguards to detainees.

Military tribunals: A type of trial in which military officers conduct the proceedings.

Non-international armed conflict: Declared or undeclared war among entities, some of which are not countries.

Prisoner of war: A member of the enemy’s armed forces captured during wartime.

Stare decisis: Latin for “let the decision stand”; the standard that cases in court should be decided in a manner consistent with the rule of law, and with the interpretation of constitutional principles for previous similar cases.

Suspension Clause: Article I, Section 9, Clause 2 of the U.S. Constitution “The Privilege of the Writ of Habeas Corpus shall not be suspended, unless when in Cases of Rebellion or Invasion the public Safety may require it.”

Treason: An act of disloyalty against one’s country.

Uniform Code of Military Justice (UCMJ): As of 1951, the foundation of military law in the United States. UCMJ replaced the Articles of War passed by Congress in 1806 and later amended on various occasions.

Unlawful enemy combatant (or Unprivileged enemy belligerent): According to MCA 2006, a person “who has engaged in hostilities or who has purposefully and materially supported hostilities against the United States or its co-belligerents,” and who is not a member of a country’s regular military force.