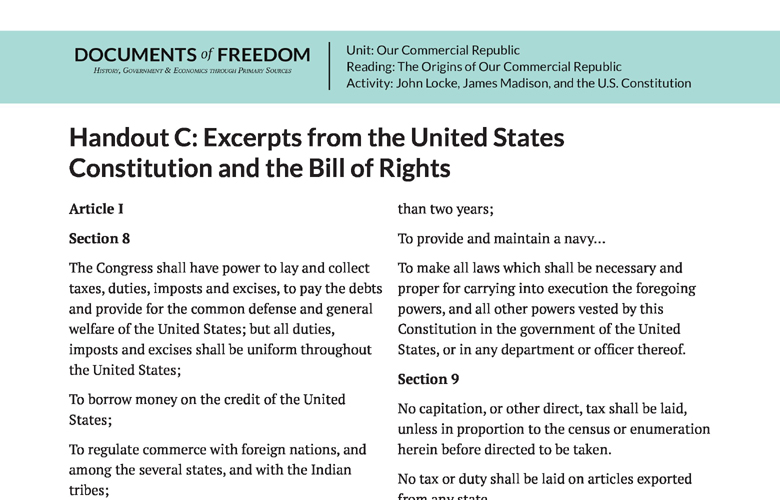 Handout C: Excerpts from the United States Constitution and the Bill of Rights

To promote the progress of science and useful arts, by securing for limited times to authors and inventors the exclusive right to their respective writings and discoveries…

To define and punish piracies and felonies committed on the high seas, and offenses against the law of nations…

To provide and maintain a navy…

No money shall be drawn from the treasury, but in consequence of appropriations made by law; and a regular statement and account of receipts and expenditures of all public money shall be published from time to time…

No state shall enter into any treaty, alliance, or confederation; grant letters of marque and reprisal; coin money; emit bills of credit; make anything but gold and silver coin a tender in payment of debts; pass any bill of attainder, ex post facto law, or law impairing the obligation of contracts, or grant any title of nobility.

No state shall, without the consent of the Congress, lay any imposts or duties on imports or exports, except what may be absolutely necessary for executing its inspection laws: and the net produce of all duties and imposts, laid by any state on imports or exports, shall be for the use of the treasury of the United States; and all such laws shall be subject to the revision and control of the Congress…