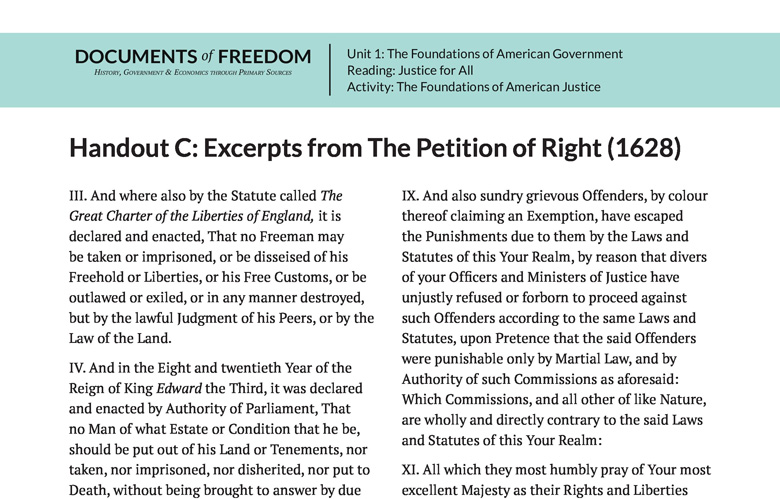 Handout C: Excerpts from The Petition of Right (1628)

III. And where also by the Statute called The Great Charter of the Liberties of England, it is declared and enacted, That no Freeman may be taken or imprisoned, or be disseised of his Freehold or Liberties, or his Free Customs, or be outlawed or exiled, or in any manner destroyed, but by the lawful Judgment of his Peers, or by the Law of the Land.

IV. And in the Eight and twentieth Year of the Reign of King Edward the Third, it was declared and enacted by Authority of Parliament, That no Man of what Estate or Condition that he be, should be put out of his Land or Tenements, nor taken, nor imprisoned, nor disherited, nor put to Process of Law.

VI. And whereas of late great Companies of Soldiers and Mariners have been dispersed into divers Counties of the Realm, and the Inhabitants against their Wills have been compelled to receive them into their Houses, and there to suffer them to sojourn, against the Laws and Customs of this Realm, and to the great Grievance and Vexation of the People.

IX. And also sundry grievous Offenders, by colour thereof claiming an Exemption, have escaped the Punishments due to them by the Laws and Statutes of this Your Realm, by reason that divers unjustly refused or forborn to proceed against such offenders according to the same Laws and Statutes, upon Pretence that the said Offenders were punishable only by Martial Law, and by Authority of such Commissions as aforesaid: Which Commissions, and all other of like Nature, are wholly and directly contrary to the said Laws and Statutes of this Your Realm: