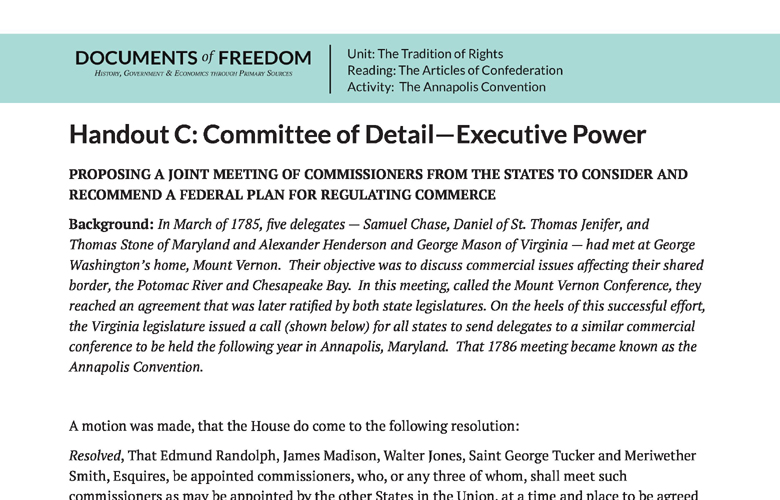 Background: In March of 1785, five delegates — Samuel Chase, Daniel of St. Thomas Jenifer, and Thomas Stone of Maryland and Alexander Henderson and George Mason of Virginia — had met at George Washington’s home, Mount Vernon. Their objective was to discuss commercial issues affecting their shared border, the Potomac River and Chesapeake Bay. In this meeting, called the Mount Vernon Conference, they reached an agreement that was later ratified by both state legislatures. On the heels of this successful effort, the Virginia legislature issued a call (shown below) for all states to send delegates to a similar commercial conference to be held the following year in Annapolis, Maryland. That 1786 meeting became known as the Annapolis Convention.

A motion was made, that the House do come to the following resolution:

Resolved, That Edmund Randolph, James Madison, Walter Jones, Saint George Tucker and Meriwether Smith, Esquires, be appointed commissioners, who, or any three of whom, shall meet such commissioners as may be appointed by the other States in the Union, at a time and place to be agreed on, to take into consideration the trade of the United States; to examine the relative situations and trade of the said States; to consider how far a uniform system in their commercial regulations may be necessary to their common interest and their permanent harmony; and to report to the several States, such an act relative to this great object, as, when unanimously ratified by them, will enable the United States in Congress, effectually to provide for the same.