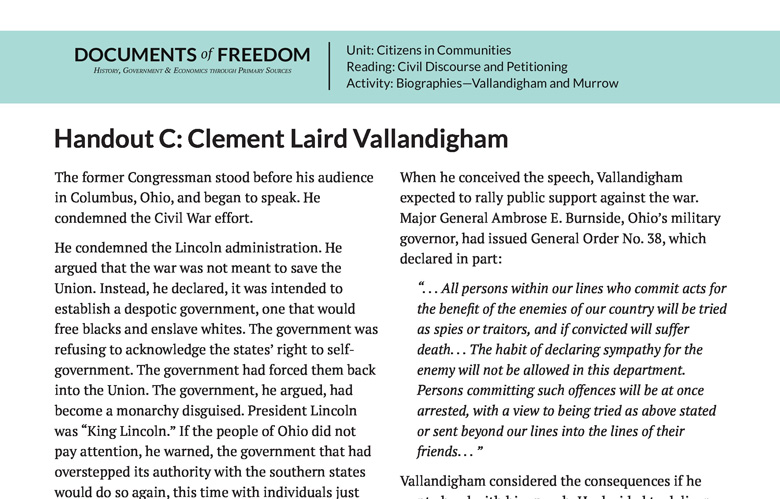 The former Congressman stood before his audience in Columbus, Ohio, and began to speak. He condemned the Civil War effort.

He condemned the Lincoln administration. He argued that the war was not meant to save the Union. Instead, he declared, it was intended to establish a despotic government, one that would free blacks and enslave whites. The government was refusing to acknowledge the states’ right to self-government. The government had forced them back into the Union. The government, he argued, had become a monarchy disguised. President Lincoln was “King Lincoln.” If the people of Ohio did not pay attention, he warned, the government that had overstepped its authority with the southern states would do so again, this time with individuals just like them.

On April 30, 1863, Clement Laird Vallandigham appealed to the audience to consider his views. He knew that the United States government would not.

An outspoken states’ rights advocate, Vallandigham was addressing the home crowd. A native of Lisbon, Ohio, he was a renowned lawyer and former state representative. Although he had been unsuccessful in his earlier bids for public office, he narrowly won a Democratic seat in the U.S. House of Representatives in 1858. He was popular and was reelected in 1860.

Vallandigham continued to oppose the federal military action against the southern states after the election of Abraham Lincoln as president. Soon he became known as a Copperhead, the term for Northern Democrats who opposed Lincoln and supported immediate peace with the South. He was not reelected in 1862, a result many attributed to district gerrymandering.

When he conceived the speech, Vallandigham expected to rally public support against the war. Major General Ambrose E. Burnside, Ohio’s military governor, had issued General Order No. 38, which declared in part:

“. . . All persons within our lines who commit acts for the benefit of the enemies of our country will be tried as spies or traitors, and if convicted will suffer death. . . The habit of declaring sympathy for the enemy will not be allowed in this department. Persons committing such offences will be at once arrested, with a view to being tried as above stated or sent beyond our lines into the lines of their friends. . . ”

Vallandigham considered the consequences if he went ahead with his speech. He decided to deliver it as planned. It was his right, he declared, under “General Order No. 1, the Constitution!” He was arrested one week later.

The night of his arrest, troops escorted Vallandigham out of his house and into military custody. The next day, he was charged with “declaring sympathy for the enemy” and uttering disloyal sentiments. The military court also denied his constitutional right to a writ of habeas corpus, the right to question the government about the lawfulness of his arrest.

Vallandigham, a lawyer, forcefully argued that the military court had no jurisdiction over him. He was a United States citizen. He had committed no crime against the Constitution or its laws. He issued the following statement from his cell:

“TO THE DEMOCRACY OF OHIO: I am here, in a military bastile for no other offence than my political opinions, and the defence of them and the rights of the people, and of your constitutional liberties. Speeches made in the hearing of thousands of you, in denunciation of the usurpation of power, infractions of the Constitution and laws, and of military despotism, were the causes of my arrest and imprisonment. I am a Democrat; for Constitution, for law, for Union, for liberty; this is my only crime. For no disobedience to the Constitution, for no violation of law, for no word, sign or gesture of sympathy with the men of the South, who are for disunion and Southern independence, but in obedience to their demand, as well as the demand of Northern Abolition disunionists and traitors, I am here today in bonds; but ‘Time, at last, sets all things even.’

“Meanwhile, Democrats of Ohio, of the Northwest, of the United States, be firm, be true to your principles, to the Constitution, to the Union, and all will yet be well. As for myself, I adhere to every principle, and will make good, through imprisonment and life itself, every pledge and declaration which I have ever made, uttered or maintained from the beginning. To you, to the whole people, to time I again appeal. Stand firm! Falter not an instant!”

In court, Vallandigham was convicted and sentenced to two years in military prison. Ohio Peace Democrats voiced their outrage and defended Vallandigham in public. How could a civilian be tried in a military court for his political speech? What did that say about the Constitution and First Amendment?

The government claimed that opposition speech during times of war posed a legitimate threat to the security of the United States. To many in the Lincoln administration, Vallandigham’s speech was not political expression worthy of public consideration. It was a call to treason, and officials who believed so did everything in their power to suppress it.

In 1864, in Ex Parte Vallandigham, the Court unanimously refused to hear Vallandigham’s case, saying it had no jurisdiction to do so. The constitutional question—can the government arrest and try civilians in a military court— remained unanswered. To quell the controversy and curb support for the prisoner, President Lincoln commuted his sentence. Vallandigham was banished behind Confederate lines.

Vallandigham remained there only a short time. He moved to Canada, and managed his campaign for governor of Ohio. When he returned to his home state in secret in 1864, he did not shy away from speaking out against the war. President Lincoln and military officials, this time, decided to leave him alone. In the years that followed the war, Clement Laird Vallandigham remained an influential member of the Democratic Party, exercising his free speech rights in support of Reconstruction.