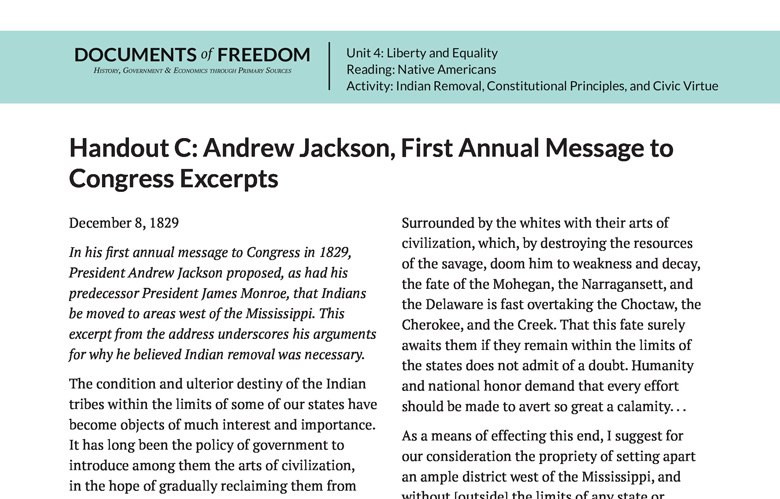 In his first annual message to Congress in 1829, President Andrew Jackson proposed, as had his predecessor President James Monroe, that Indians be moved to areas west of the Mississippi. This excerpt from the address underscores his arguments for why he believed Indian removal was necessary.

The condition and ulterior destiny of the Indian tribes within the limits of some of our states have become objects of much interest and importance. It has long been the policy of government to introduce among them the arts of civilization, in the hope of gradually reclaiming them from a wandering life. This policy has, however, been coupled with another wholly incompatible with its success. Professing a desire to civilize and settle them, we have at the same time lost no opportunity to purchase their lands and thrust them farther into the wilderness. By this means they have not only been kept in a wandering state, but been led to look upon us as unjust and indifferent to their fate. . .

Our conduct toward these people is deeply interesting to our national character. Their present condition, contrasted with what they once were, makes a most powerful appeal to our sympathies. Our ancestors found them the uncontrolled possessors of these vast regions. By persuasion and force they have been made to retire from river to river and from mountain to mountain, until some of the tribes have become extinct and others have left but remnants to preserve for awhile their once terrible names.

Surrounded by the whites with their arts of civilization, which, by destroying the resources of the savage, doom him to weakness and decay, the fate of the Mohegan, the Narragansett, and the Delaware is fast overtaking the Choctaw, the Cherokee, and the Creek. That this fate surely awaits them if they remain within the limits of the states does not admit of a doubt. Humanity and national honor demand that every effort should be made to avert so great a calamity. . .

As a means of effecting this end, I suggest for our consideration the propriety of setting apart an ample district west of the Mississippi, and without [outside] the limits of any state or territory now formed, to be guaranteed to the Indian tribes as long as they shall occupy it, each tribe having a distinct control over the portion designated for its use. There they may be secured in the enjoyment of governments of their own choice, subject to no other control from the United States than such as may be necessary to preserve peace on the frontier and between the several tribes. There the benevolent may endeavor to teach them the arts of civilization, and, by promoting union and harmony among them, to raise up an interesting commonwealth, destined to perpetuate the race and to attest the humanity and justice of this government.

This emigration should be voluntary, for it would be as cruel as unjust to compel the aborigines to abandon the graves of their fathers and seek a home in a distant land. But they should be distinctly informed that if they remain within the limits of the States they must be subject to their laws. In return for their obedience as individuals they will without doubt be protected in the enjoyment of those possessions which they have improved by their industry. But it seems to me visionary to suppose that in this state of things claims can be allowed on tracts of country on which they have neither dwelt nor made improvements, merely because they have seen them from the mountain or passed them in the chase. Submitting to the laws of the States, and receiving, like other citizens, protection in their persons and property, they will ere long become merged in the mass of our population.