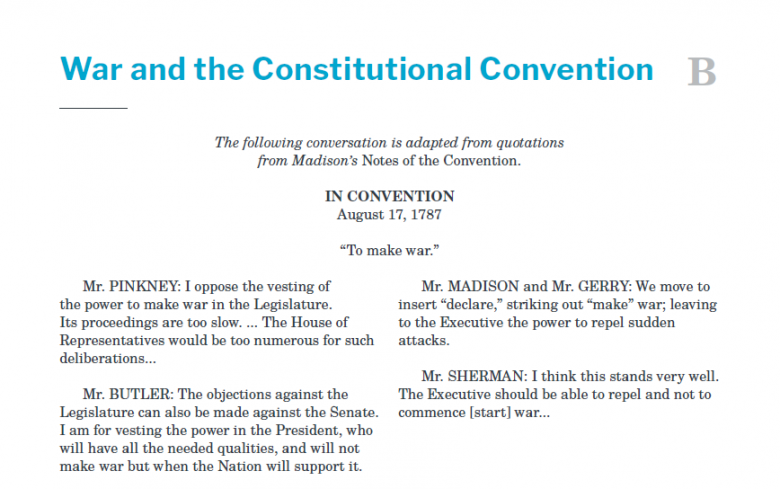 War and the Constitutional Convention

The following conversation is adapted from quotations from Madison’s Notes of the Convention.

Mr. PINKNEY: I oppose the vesting of the power to make war in the Legislature. Its proceedings are too slow. … The House of Representatives would be too numerous for such deliberations…

Mr. BUTLER: The objections against the Legislature can also be made against the Senate. I am for vesting the power in the President, who will have all the needed qualities, and will not make war but when the Nation will support it.

Mr. MADISON and Mr. GERRY: We move to insert “declare,” striking out “make” war; leaving to the Executive the power to repel sudden attacks.

Mr. SHERMAN: I think this stands very well. The Executive should be able to repel and not to commence [start] war…

ARTICLE I, SECTION 8 (EXCERPTS)
Congress shall have the power:…To declare war…To raise and support armies…To provide and maintain a navy… To make all laws which shall be necessary and proper for carrying into execution the foregoing powers, and all other powers vested by this Constitution in the government of the United States, or in any department or officer thereof.