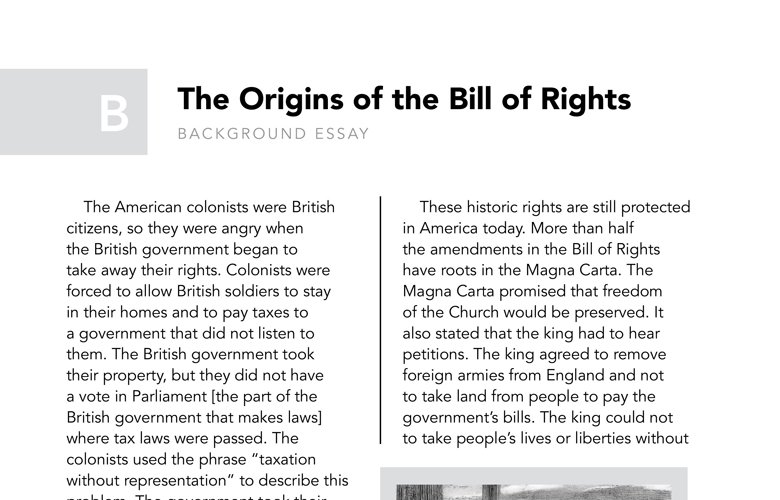 What Is the Magna Carta?

The ideas of natural rights were very old. In fact, much of American law came from traditional English rights. The Magna Carta is the oldest document in British and American history that describes these rights. Although it was written in 1215, the Magna Carta describes the rights it lists as “ancient” [very old].

These historic rights are still protected in America today. More than half the amendments in the Bill of Rights have roots in the Magna Carta. The Magna Carta promised that freedom of the Church would be preserved. It also stated that the king had to hear petitions. The king agreed to remove foreign armies from England and not to take land from people to pay the government’s bills. The king could not to take people’s lives or liberties without due process or repayment. He was not allowed to delay trials or to punish people without hearing from witnesses. He also could not give unfair fines or punishments. The Founders believed that these rights were natural and that all people had them. For this reason, these rights were later protected in the Bill of Rights of the United States Constitution.

How Were Rights Protected and Expanded?

Over time, Magna Carta rights and freedoms became part of English common law. Englishmen wanted to protect these rights when the king tried to take them away. After King Charles I tried to take away peoples’ rights and rule as a dictator, Parliament gave him a list of complaints. This list is now called the Petition of Right. The Petition of Right made sure that the king also had to obey laws. Charles’s abuses of the law included violating due process, unjustly taking property or imprisoning people, denying the right to trial by fellow Englishmen, and giving unjust punishments and fines. Although Charles first agreed to obey the law, he soon broke his promise. He was put to death in 1649. The rights Parliament wanted to defend in the Petition of Right were later protected by the Constitution’s Bill of Rights.

What Was the Purpose of Government?

Just after the Declaration of Rights, John Locke, an English philosopher who wrote about natural rights and society, wrote Two Treatises of Civil Government (1690). Locke said that men are naturally free and equal and that they own both themselves and their property. He said that people form communities “for their comfortable, safe, peaceable living” and in order to protect their rights. Locke believed that a government’s purpose was to uphold natural rights protecting life, liberty, and property. If a government does not protect its people, then the people have a right to get rid of their government.

The colonists agreed. When the British ignored English laws in the American colonies, the colonists had a tradition demanding that those laws be followed.

What Did the Colonial Experience Teach the Founders?

When the first British colonists came to America, they brought their rights as Englishmen with them. The colony of Massachusetts adopted the “Body of Liberties” in 1641. The document protected free speech and petition, just payment for property taken for public use, protection from double jeopardy, right to trial by jury, the right to have a lawyer, and protection from cruel punishments and excessive bail. All of these rights were later protected by the Bill of Rights.

Between 1763 and 1776, the British government began to limit freedoms, especially relating to taxation without representation. Colonists were forced to give British troops shelter. The rights to free speech, press, and assembly, as well as the colonists’ weapons and protections of property were all taken away. Colonists also stood trial in English courts, rather than colonial courts, and were imprisoned without trial. The colonists protested these acts and eventually decided to fight back. The colonists later addressed these issues in the United States Bill of Rights.

How Did History Repeat Itself?

Why Add a Bill of Rights?

Some Americans thought that the Constitution made the central government too strong. They believed that a separate listing of rights was needed to protect individual rights and states’ powers. The Bill of Rights was a compromise between those who wanted a stronger central government and those who wanted to protect individual rights and states’ freedom to make their own decisions. The new Constitution was ratified in 1788 and in 1791 amended to include the first ten amendments, now called the Bill of Rights.