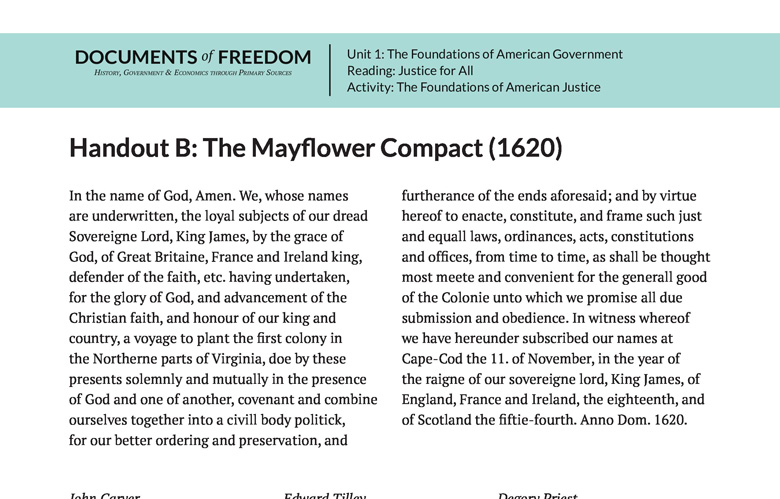 Handout B: The Mayflower Compact

In the name of God, Amen. We, whose names are underwritten, the loyal subjects of our dread Sovereigne Lord, King James, by the grace of God, of Great Britaine, France and Ireland king, defender of the faith, etc. having undertaken, for the glory of God, and advancement of the Christian faith, and honour of our king and country, a voyage to plant the first colony in the Northerne parts of Virginia, doe by these presents solemnly and mutually in the presence of God and one of another, covenant and combine ourselves together into a civill body politick, for our better ordering and preservation, and furtherance of the ends aforesaid; and by virtue hereof to enacte, constitute, and frame such just and equall laws, ordinances, acts, constitutions, and offices, from time to time, as shall be thought most meete and convenient for the generall good of the Colonie unto which we promise all due submission and obedience. In witness whereof we have hereunder subscribed our names at Cape-Cod the 11. of November, in the year of the raigne of our sovereigne lord, King James, of England, France and Ireland, the eighteenth, and of Scotland the fiftie-fourth. Anno dom. 1620.