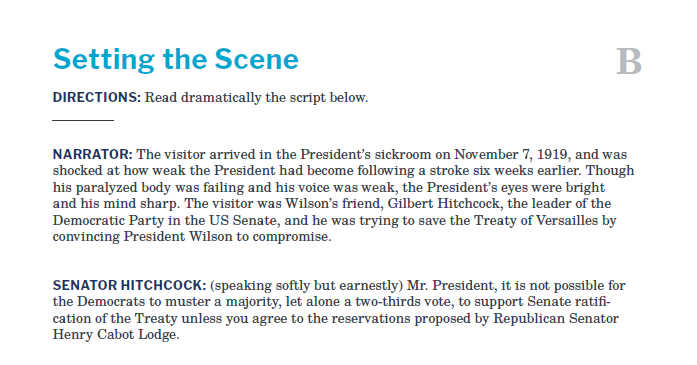 Directions: Read dramatically the script below.

NARRATOR: The visitor arrived in the President’s sickroom on November 7, 1919, and was shocked at how weak the President had become following a stroke six weeks earlier. Though his paralyzed body was failing and his voice was weak, the President’s eyes were bright and his mind sharp. The visitor was Wilson’s friend, Gilbert Hitchcock, the leader of the Democratic Party in the US Senate, and he was trying to save the Treaty of Versailles by convincing President Wilson to compromise.

SENATOR HITCHCOCK: (speaking softly but earnestly) Mr. President, it is not possible for the Democrats to muster a majority, let alone a two-thirds vote, to support Senate ratification of the Treaty unless you agree to the reservations proposed by Republican Senator Henry Cabot Lodge.

PRESIDENT WILSON: (groaning as he tries to sit up in bed) It is possible! It IS possible!

HITCHCOCK: (pleading) Mr. President, it might be wise to compromise…

WILSON: (interrupting, with venom in his voice, and raising himself up on one elbow) Let Lodge compromise!

HITCHCOCK: (patiently trying again) Well, of course,…but we might hold out the olive branch.

WILSON: (emphatically) Let Lodge hold out the olive branch! I have no moral right to accept any change in a paper I have already signed. (Pause) Edith, take this down. (dictates) “I hope all true friends of the Treaty will refuse to support the Lodge reservations.” Please convey this message to all the Democratic Senators.

NARRATOR: The patient’s wife, Edith Wilson, and his doctor, alarmed at how agitated the President had become, both escorted Hitchcock out of the room. The Senator’s advice was rejected. Hitchcock read the letter to the Democratic caucus the next day, and continued the fight in the Senate for unconditional ratification of the Treaty of Versailles.