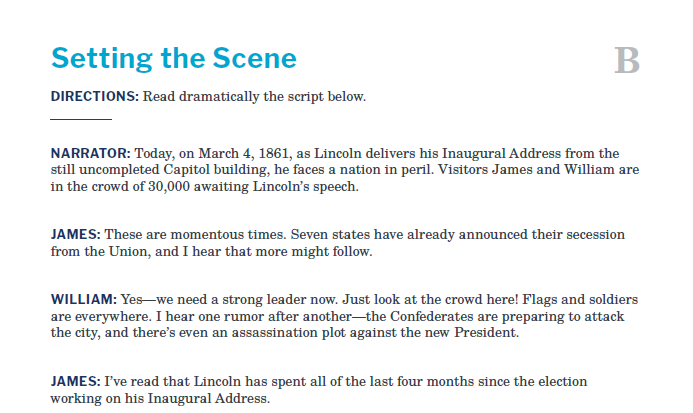 Directions: Read dramatically the script below.

NARRATOR: Today, on March 4, 1861, as Lincoln delivers his Inaugural Address from the still uncompleted Capitol building, he faces a nation in peril. Visitors James and William are in the crowd of 30,000 awaiting Lincoln’s speech.

JAMES: These are momentous times. Seven states have already announced their secession from the Union, and I hear that more might follow.

WILLIAM: Yes—we need a strong leader now. Just look at the crowd here! Flags and soldiers are everywhere. I hear one rumor after another—the Confederates are preparing to attack the city, and there’s even an assassination plot against the new President.

JAMES: I’ve read that Lincoln has spent all of the last four months since the election working on his Inaugural Address.

WILLIAM: He’s famous for how carefully he prepares his speeches, and this will be his most important speech so far. I wonder what he’ll say about slavery.

NARRATOR: The new President takes the podium and delivers his Inaugural Address. Lincoln explains that he believes secession is unconstitutional and that he intends to do all in his power to save the Union. He also makes clear his duty to “hold, occupy and possess” all federal property. Let’s hear the President now address the important issue of slavery:

PRESIDENT LINCOLN: “…I have no purpose, directly or indirectly, to interfere with the institution of slavery in the states where it exists. I believe I have no lawful right to do so, and I have no inclination to do so…”