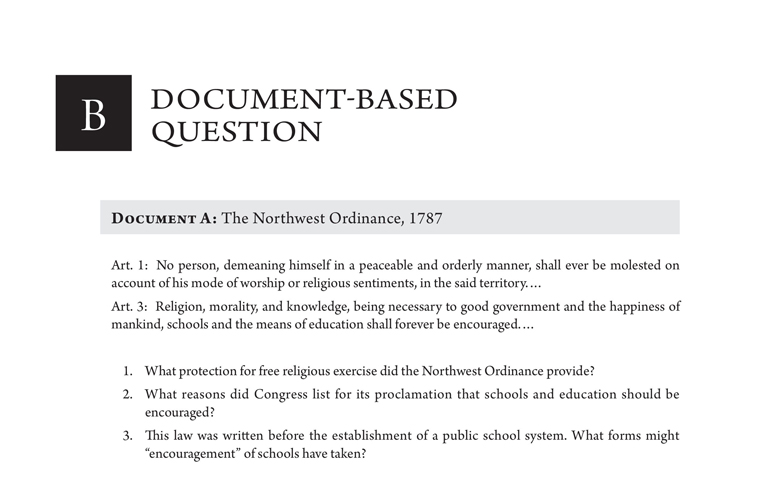 Directions: Read the document excerpts and answer the questions.

Document A: The Northwest Ordinance, 1787

Art. 1: No person, demeaning himself in a peaceable and orderly manner, shall ever be molested on account of his mode of worship or religious sentiments, in the said territory.…

Art. 3: Religion, morality, and knowledge, being necessary to good government and the happiness of mankind, schools and the means of education shall forever be encouraged.…

Document B: The First Amendment, 1791

No state shall make or enforce any law which shall abridge the privileges or immunities of citizens of the United States; nor shall any state deprive any person of life, liberty, or property, without due process of law; nor deny to any person within its jurisdiction the equal protection of the laws.

When the power, prestige and financial support of government is placed behind a particular religious belief, the indirect coercive pressure upon religious minorities to conform to the prevailing officially approved religion is plain. 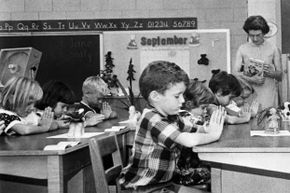 In our system, state-operated schools may not be enclaves of totalitarianism. School officials do not possess absolute authority over their students. Students in school as well as out of school are “persons” under our Constitution. …In our system, students may not be regarded as closed-circuit recipients of only that which the State chooses to communicate. They may not be confined to the expression of those sentiments that are officially approved. …The prohibition of expression of one particular opinion, at least without evidence that it is necessary to avoid material and substantial interference with schoolwork or discipline, is not constitutionally permissible.

[In this case,] the Court strikes down an Alabama statute because the State wished to “characterize prayer as a favored practice.” It would come as much of a shock to those who drafted the Bill of Rights as it will to a large number of thoughtful Americans today to learn that the Constitution, as construed by the [Supreme Court] majority, prohibits the Alabama Legislature from “endorsing” prayer. George Washington himself, at the request of the very Congress which passed the Bill of Rights, proclaimed a day of “public thanksgiving and prayer, to be observed by acknowledging with grateful hearts the many and signal favors of Almighty God.” History must judge whether it was the Father of his Country in 1789, or a majority of the Court today, which has strayed from the meaning of the Establishment Clause.

[T]he constitutional rights of students in public school are not automatically coextensive with the rights of adults in other settings….

Document I: Board of Education of Westside Community Schools v. Mergens, 1990

[T]here is a crucial difference between government speech endorsing religion, which the Establishment Clause forbids, and private speech endorsing religion, which the Free Speech and Free Exercise Clauses protect. We think that secondary school students are mature enough and are likely to understand that a school does not endorse or support student speech that it merely permits on a nondiscriminatory basis…. The proposition that schools do not endorse everything they fail to censor is not complicated.

The government involvement with religious activity in this case is pervasive, to the point of creating a state-sponsored and state-directed religious exercise in a public school…. A school official, the principal, decided that an invocation and a benediction should be given; this is a choice attributable to the state, and, from a constitutional perspective, it is as if a state statute decreed that the prayers must occur. The principal chose the religious participant, here a rabbi, and that choice is also attributable to the state.

[P]rivate religious speech…is as fully protected … as secular private expression. Indeed, in Anglo-American history, at least, government suppression of speech has so commonly been directed precisely
at religious speech that a free-speech clause without religion would be Hamlet without the prince.

While school officials may make private religious speech their own by endorsing it, schools do not endorse all speech that they do not censor.