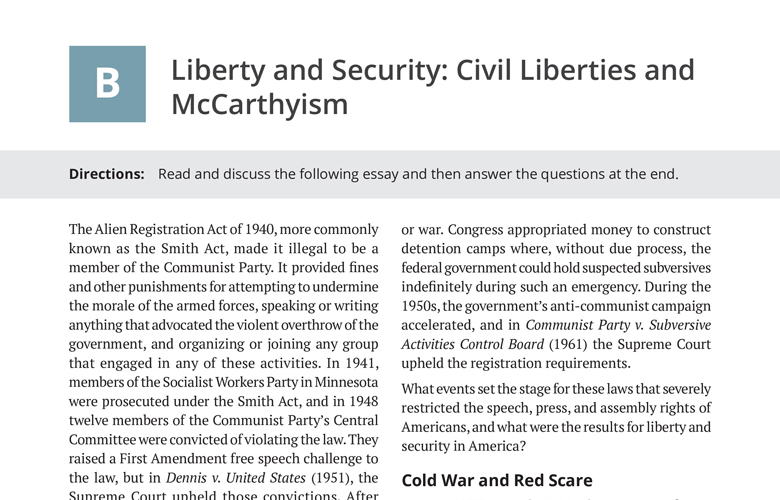 Handout B: Liberty and Security: Civil Liberties and McCarthyism

Directions: Read and discuss the following essay and then answer the questions at the end.

The Alien Registration Act of 1940, more commonly known as the Smith Act, made it illegal to be a member of the Communist Party. It provided fines and other punishments for attempting to undermine the morale of the armed forces, speaking or writing anything that advocated the violent overthrow of the government, and organizing or joining any group that engaged in any of these activities. In 1941, members of the Socialist Workers Party in Minnesota were prosecuted under the Smith Act, and in 1948 twelve members of the Communist Party’s Central Committee were convicted of violating the law. They raised a First Amendment free speech challenge to the law, but in Dennis v. United States (1951), the Supreme Court upheld those convictions. After that, 141 Communist Party leaders were indicted throughout the country.

In 1950, Congress enacted (over President Truman’s veto) the Internal Security Act, also known as the McCarran Act. This law created the Subversive Activities Control Board to administer the registration process that it required for the Communist Party and all related groups that advocated “certain un-American and subversive activities.” Such associations were to submit to the attorney general’s office lists showing names and addresses of their officers and members, as well as the groups’ sources of income and expenditure reports. Members were prohibited from working for the U.S. government, labor unions, or defense facilities. They were denied passports and restricted from entering or leaving the U.S. They were required to label all broadcasts, publications and mailings as sponsored by “a communist organization.” The president was authorized to declare an “internal security emergency” in the event of insurrection, invasion, or war. Congress appropriated money to construct detention camps where, without due process, the federal government could hold suspected subversives indefinitely during such an emergency. During the 1950s, the government’s anti-communist campaign accelerated, and in Communist Party v. Subversive Activities Control Board (1961) the Supreme Court upheld the registration requirements.

Born in 1908, Joseph McCarthy was one of nine children belonging to a farming family in Wisconsin. He completed elementary school and then went into business for himself selling chickens and eggs. At the age of twenty, he enrolled in high school, completing the full high school course of study in less than a year. He then enrolled at Marquette University, studying engineering and then law. After enjoying limited success as an attorney, McCarthy was elected a Wisconsin circuit judge, but left that position in July 1942 to join the U.S. Marines. He served as an intelligence officer stationed in the Pacific theater during World War II. While still on active duty, he announced his surprising decision to run for U.S. Senate in 1944. Failing to win the Republican primary, he began an early campaign for 1946. In this campaign, McCarthy inflated his war record, calling himself “Tailgunner Joe” and he was elected U.S. Senator from Wisconsin. In the Senate, McCarthy became known as loud, impulsive, dishonest, opportunistic, and ruthless.

Following World War II, American foreign policy turned intensely against communism. During what became known as the Cold War, the United States and the Soviet Union vied for influence around the world, and by 1950, the communists appeared to be winning. Soviet puppet governments had been established in Albania (1946), Poland (1947), and Czechoslovakia (1948). Beginning in June of 1948, Soviet dictator Joseph Stalin imposed what would be a year-long blockade of West Berlin. In 1949, the Communists won China’s civil war, and the Soviets tested their first atomic bomb. Espionage convictions of Klaus Fuch in England and Judith Coplon in the United States further powered the building Red Scare. In June 1950, the communist government of North Korea invaded South Korea. Joseph McCarthy had an explanation for all of these setbacks of U.S. foreign policy goals: Communists had infiltrated the U.S. State Department where they carried out their plans to advance communism around the world. He fueled—and rode—a virulent Red Scare, the wave of anti-communist hysteria that ensued.

Though there were many examples of state and federal anti-communist legislation prior to 1945, the post-World War II Red Scare may have begun with the Truman Administration’s loyalty program and its lists of people scrutinized for possible subversive activities. In a 1947 executive order, Truman established loyalty boards to conduct investigations of federal employees. The boards reviewed every employee, checking for past or current involvement in any “totalitarian, fascist, communist, or subversive” organization. The attorney general created a growing list of such organizations based on vague and shifting criteria. A loyalty board’s doubt about a federal employee’s background or associations was grounds for a full FBI probe, involving interviews of former and current friends, acquaintances, enemies, and associates of any kind. In the inquisition-like hearings that followed, the employee could consult an attorney and present witnesses and documents in his favor, but had no right to challenge his accusers or even to know who they were. As anti-communist fervor swept the country, hyper-vigilant people eager to inform on their neighbors and co-workers, submitted “evidence” of disloyalty built in some cases on unsubstantiated hearsay, mistaken identity, or an old grudge. Though the boards discovered only a few employees whose loyalty could reasonably be questioned, charges and rumors of communist affiliation destroyed the reputations of many people. A donation to a “suspect” group, a conversation with a “questionable” individual, a visit to a foreign film, a piece of “communist literature” in one’s home or office—all these and more were grounds to call one’s loyalty into question.

In a campaign speech just a week before Election Day in 1948, President Truman appealed to fear of communism in the United States, proclaiming, “I want you to get this straight now. I hate communism. I deplore what it does to the dignity and freedom of the individual. I detest the godless creed it teaches. I have fought it at home. I have fought it abroad, and I shall continue to fight it with all my strength. This is one issue on which I shall never surrender.” President Eisenhower employed a similar process of fighting communism through loyalty hearings in which witnesses who pled the Fifth Amendment before a loyalty board were dismissed from their federal jobs.

Not only did the executive branch conduct an anticommunist crusade among federal employees; senators and congressmen also sought to bolster their reputations as protectors of real Americanism. The House of Representatives had established the Un-American Activities Committee (HUAC) in 1938 to investigate communist and fascist organizations. After World War II the committee renewed its efforts to ferret out communist and subversive influences. In 1947, HUAC subpoenaed dozens of individuals to testify about their alleged connections with or knowledge of communists in America. HUAC’s inquisition-like methodology paralleled that of the loyalty review boards in the executive branch. In the 1940s and 1950s, Americans could lose their jobs, their reputations, and their liberty because of alleged ideas or connections considered unpatriotic. In this atmosphere any criticism of the government was suspect, and meaningful debate was stifled.

These events set the stage for Joseph McCarthy’s anti-communist crusade. In a Wheeling, West Virginia speech on February 9, 1950, he waved a piece of paper in the air, claiming that he had a list of 205 known members of the Communist Party working in the State Department. Over the next few days and weeks, McCarthy’s numbers changed as he made vague accusations of subversion at the highest levels. Such serious charges led the Senate immediately to begin an investigation. Though he could provide no substantial evidence to the subcommittee investigation headed by Senator Millard Tydings, McCarthy had found the issue that kept him in the news for the next four years. The press, eager to sell newspapers, publicized the witch-hunt until it captured the public imagination and dominated the political scene. Whenever critics condemned McCarthy’s rudeness and extremism or questioned his sources, he branded them “liars, crooks, or traitors.”

Not all press coverage of McCarthy’s activities was positive; in 1950, the cartoonist, Herb Block, (Herblock) coined the term, “McCarthyism” and pointed out the menace to civil liberties inherent in McCarthy’s tactics. When the senator in 1952 accused Time Magazine of “twisting and distorting the facts about [his] fight to expose and remove communists from government,” Collier’s Magazine ran a critical editorial pointing out his hypocrisy.

In 1951 the trusted radio broadcaster Edward R. Murrow made the transition to the new medium of television. He hosted a popular and respected program presenting in-depth reports of current events, and in 1954 he broadcast an episode that used clips from McCarthy’s own speeches, to create a portrait of Joseph McCarthy and McCarthyism. The report made clear McCarthy’s extreme rudeness and disregard for the truth. Beginning the following month, the televised Senate hearings in which McCarthy charged that the U.S. Army was riddled with communists finally ended his reign of terror. Viewers who had followed McCarthy’s accusations with interest now watched his bullying tactics and reckless badgering of witnesses on live TV. When McCarthy provided no proof or evidence for his bogus charges, his approval ratings plummeted, and his reputation never recovered. In December the U.S. Senate voted to censure Joseph McCarthy for abuse of power. He died of acute hepatitis in 1957.

Communism and the specter of losing the Cold War were genuine threats to the ideals that Americans held most dear: individual liberties, private property, and government by consent. Bishop Fulton J. Sheen explained the communist threat this way: “The basic struggle today is not between individualism and collectivism, free enterprise and socialism,” but a more important battle over whether “man shall exist for the state or the state for man.”

How imminent was the national security threat of communism? How extensive was any Soviet spy ring that may have existed? In 1995, the federal government declassified a U.S. Cold War counterintelligence program called the Venona Project. While some of the Venona information is ambiguous, overall it indicates that Soviets actively engaged in espionage in the U.S. To what extent did Joseph McCarthy’s activities help uncover that real threat? Not at all. McCarthy was chief among politicians of both parties who attempted to use and inflame public hysteria for political gain. His charges never resulted in a single conviction for espionage or subversion. McCarthyism had two main results: First, thousands of Americans were dismissed from their jobs and blacklisted from future employment due to baseless accusations fueled by a panicky witch-hunt. Second, it chilled public discourse for a decade, making it unsafe to question political orthodoxy. The national security peril posed by communism in postwar America is debatable. The loss of First Amendment liberties through suppression of opinion and public discourse is clear.