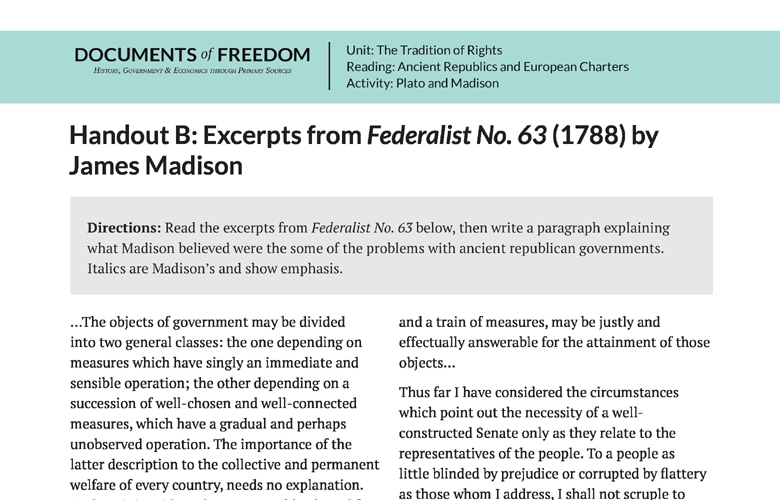 Directions: Read the excerpts from Federalist No. 63 below, then write a paragraph explaining what Madison believed were the some of the problems with ancient republican governments. Italics are Madison’s and show emphasis.

…The objects of government may be divided into two general classes: the one depending on measures which have singly an immediate and sensible operation; the other depending on a succession of well-chosen and well-connected measures, which have a gradual and perhaps unobserved operation. The importance of the latter description to the collective and permanent welfare of every country, needs no explanation. And yet it is evident that an assembly elected for so short a term as to be unable to provide more than one or two links in a chain of measures, on which the general welfare may essentially depend, ought not to be answerable for the final result, any more than a steward or tenant, engaged for one year, could be justly made to answer for places or improvements which could not be accomplished in less than half a dozen years. Nor is it possible for the people to estimate the share of influence which their annual assemblies may respectively have on events resulting from the mixed transactions of several years. It is sufficiently difficult to preserve a personal responsibility in the members of a numerous body, for such acts of the body as have an immediate, detached, and palpable operation on its constituents.

The proper remedy for this defect must be an additional body in the legislative department, which, having sufficient permanency to provide for such objects as require a continued attention, and a train of measures, may be justly and effectually answerable for the attainment of those objects…

Thus far I have considered the circumstances which point out the necessity of a well-constructed Senate only as they relate to the representatives of the people. To a people as little blinded by prejudice or corrupted by flattery as those whom I address, I shall not scruple to add, that such an institution may be sometimes necessary as a defense to the people against their own temporary errors and delusion. As the cool and deliberate sense of the community ought, in all governments, and actually will, in all free governments, ultimately prevail over the views of its rulers; so there are particular moments in public affairs when the people, stimulated by some irregular passion, or some illicit advantage, or misled by the artful misrepresentations of interested men, may call for measures which they themselves will afterwards be the most ready to lament and condemn. In these critical moments, how salutary will be the interference of some temperate and respectable body of citizens, in order to check the misguided career, and to suspend the blow meditated by the people against themselves, until reason, justice, and truth can regain their authority over the public mind? What bitter anguish would not the people of Athens have often escaped if their government had contained so provident a safeguard against the tyranny of their own passions? Popular liberty might then have escaped the indelible reproach of decreeing to the same citizens the hemlock on one day and statues on the next…

It adds no small weight to all these considerations, to recollect that history informs us of no long-lived republic which had not a senate. Sparta, Rome, and Carthage are, in fact, the only states to whom that character can be applied. In each of the two first there was a senate for life. The constitution of the senate in the last is less known. Circumstantial evidence makes it probable that it was not different in this particular from the two others. It is at least certain, that it had some quality or other which rendered it an anchor against popular fluctuations; and that a smaller council, drawn out of the senate, was appointed not only for life, but filled up vacancies itself. These examples, though as unfit for the imitation, as they are repugnant to the genius, of America, are, notwithstanding, when compared with the fugitive and turbulent existence of other ancient republics, very instructive proofs of the necessity of some institution that will blend stability with liberty. I am not unaware of the circumstances which distinguish the American from other popular governments, as well ancient as modern; and which render extreme circumspection necessary, in reasoning from the one case to the other. But after allowing due weight to this consideration, it may still be maintained, that there are many points of similitude which render these examples not unworthy of our attention. Many of the defects, as we have seen, which can only be supplied by a senatorial institution, are common to a numerous assembly frequently elected by the people, and to the people themselves. There are others peculiar to the former, which require the control of such an institution. The people can never wilfully betray their own interests; but they may possibly be betrayed by the representatives of the people; and the danger will be evidently greater where the whole legislative trust is lodged in the hands of one body of men, than where the concurrence of separate and dissimilar bodies is required in every public act.

The difference most relied on, between the American and other republics, consists in the principle of representation; which is the pivot on which the former move, and which is supposed to have been unknown to the latter, or at least to the ancient part of them. The use which has been made of this difference, in reasonings contained in former papers, will have shown that I am disposed neither to deny its existence nor to undervalue its importance. I feel the less restraint, therefore, in observing, that the position concerning the ignorance of the ancient governments on the subject of representation, is by no means precisely true in the latitude commonly given to it. Without entering into a disquisition which here would be misplaced, I will refer to a few known facts, in support of what I advance.

In the most pure democracies of Greece, many of the executive functions were performed, not by the people themselves, but by officers elected by the people, and representing the people in their executive capacity.

Prior to the reform of Solon, Athens was governed by nine Archons, annually elected by the people at large. The degree of power delegated to them seems to be left in great obscurity. Subsequent to that period, we find an assembly, first of four, and afterwards of six hundred members, annually elected by the people; and partially representing them in their legislative capacity, since they were not only associated with the people in the function of making laws, but had the exclusive right of originating legislative propositions to the people. The senate of Carthage, also, whatever might be its power, or the duration of its appointment, appears to have been elective by the suffrages of the people. Similar instances might be traced in most, if not all the popular governments of antiquity.

Lastly, in Sparta we meet with the Ephori, and in Rome with the Tribunes; two bodies, small indeed in numbers, but annually elected by the whole body of the people, and considered as the representatives of the people, almost in their plenipotentiary capacity. The Cosmi of Crete were also annually elected by the people, and have been considered by some authors as an institution analogous to those of Sparta and Rome, with this difference only, that in the election of that representative body the right of suffrage was communicated to a part only of the people.

From these facts, to which many others might be added, it is clear that the principle of representation was neither unknown to the ancients nor wholly overlooked in their political constitutions. The true distinction between these and the American governments, lies in the total exclusion of the people, in their collective capacity, from any share in the latter, and not in the total exclusion of the representatives of the people from the administration of the former. The distinction, however, thus qualified, must be admitted to leave a most advantageous superiority in favor of the United States. But to insure to this advantage its full effect, we must be careful not to separate it from the other advantage, of an extensive territory. For it cannot be believed, that any form of representative government could have succeeded within the narrow limits occupied by the democracies of Greece.

In answer to all these arguments, suggested by reason, illustrated by examples, and enforced by our own experience, the jealous adversary of the Constitution will probably content himself with repeating, that a senate appointed not immediately by the people, and for the term of six years, must gradually acquire a dangerous pre-eminence in the government, and finally transform it into a tyrannical aristocracy.

To this general answer, the general reply ought to be sufficient, that liberty may be endangered by the abuses of liberty as well as by the abuses of power; that there are numerous instances of the former as well as of the latter; and that the former, rather than the latter, are apparently most to be apprehended by the United States. But a more particular reply may be given.

Before such a revolution can be effected, the Senate, it is to be observed, must in the first place corrupt itself; must next corrupt the State legislatures; must then corrupt the House of Representatives; and must finally corrupt the people at large. It is evident that the Senate must be first corrupted before it can attempt an establishment of tyranny. Without corrupting the State legislatures, it cannot prosecute the attempt, because the periodical change of members would otherwise regenerate the whole body. Without exerting the means of corruption with equal success on the House of Representatives, the opposition of that coequal branch of the government would inevitably defeat the attempt; and without corrupting the people themselves, a succession of new representatives would speedily restore all things to their pristine order. Is there any man who can seriously persuade himself that the proposed Senate can, by any possible means within the compass of human address, arrive at the object of a lawless ambition, through all these obstructions?