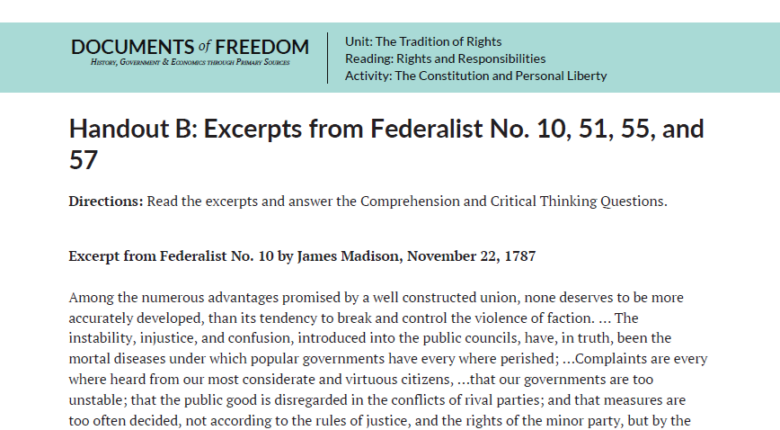 Directions: Read the excerpts and answer the Comprehension and Critical Thinking Questions.

Among the numerous advantages promised by a well constructed union, none deserves to be more accurately developed, than its tendency to break and control the violence of faction. … The instability, injustice, and confusion, introduced into the public councils, have, in truth, been the mortal diseases under which popular governments have every where perished; …Complaints are every where heard from our most considerate and virtuous citizens, …that our governments are too unstable; that the public good is disregarded in the conflicts of rival parties; and that measures are too often decided, not according to the rules of justice, and the rights of the minor party, but by the superior force of an interested and overbearing majority. …It will be found, indeed, on a candid review of our situation, that some of the distresses under which we labor, have been erroneously charged on the operation of our governments… These must be chiefly, if not wholly, effects of the unsteadiness and injustice, with which a factious spirit has tainted our public administrations. By a faction, I understand a number of citizens, whether amounting to a majority or a minority of the whole, who are united and actuated by some common impulse of passion, or of interest, adverse to the rights of other citizens, or to the permanent and aggregate interests of the community.

But what is government itself, but the greatest of all reflections on human nature? If men were angels, no government would be necessary. If angels were to govern men, neither external nor internal controls on government would be necessary. In framing a government which is to be administered by men over men, the great difficulty lies in this: you must first enable the government to control the governed; and in the next place oblige it to control itself. A dependence on the people is, no doubt, the primary control on the government; but experience has taught mankind the necessity of auxiliary precautions. . .

Second. It is of great importance in a republic, not only to guard the society against the oppression of its rulers; but to guard one part of the society against the injustice of the other part. Different interests necessarily exist in different classes of citizens. If a majority be united by a common interest, the rights of the minority will be insecure. There are but two methods of providing against this evil: the one, by creating a will in the community independent of the majority, that is, of the society itself; the other, by comprehending in the society so many separate descriptions of citizens, as will render an unjust combination of a majority of the whole very improbable, if not impracticable. The first method prevails in all governments possessing an hereditary or self-appointed authority. This, at best, is but a precarious security; because a power independent of the society may as well espouse the unjust views of the major, as the rightful interests of the minor party, and may possibly be turned against both parties. The second method will be exemplified in the federal republic of the United States. Whilst all authority in it will be derived from, and dependent on the society, the society itself will be broken into so many parts, interests, and classes of citizens, that the rights of individuals, or of the minority, will be in little danger from interested combinations of the majority. . . Justice is the end [goal] of government. It is the end of civil society. It ever has been, and ever will be, pursued, until it be obtained, or until liberty be lost in the pursuit. In a society, under the forms of which the stronger faction can readily unite and oppress the weaker, anarchy may as truly be said to reign, as in a state of nature, where the weaker individual is not secured against the violence of the stronger: and as, in the latter state, even the stronger individuals are prompted, by the uncertainty of their condition, to submit to a government which may protect the weak, as well as themselves: so, in the former state, will the more powerful factions or parties be gradually induced, by a like motive, to wish for a government which will protect all parties, the weaker as well as the more powerful. . . In the extended republic of the United States, and among the great variety of interests, parties, and sects, which it embraces, a coalition of a majority of the whole society could seldom take place upon any other principles, than those of justice and the general good. . .It is no less certain than it is important, notwithstanding the contrary opinions which have been entertained, that the larger the society, provided it lie within a practicable sphere, the more duly capable it will be of self-government. And happily for the republican cause, the practicable sphere may be carried to a very great extent, by a judicious modification and mixture of the federal principle.

As there is a degree of depravity [moral corruption; wickedness] in mankind which requires a certain degree of circumspection and distrust, so there are other qualities in human nature which justify a certain portion of esteem and confidence. Republican government presupposes the existence of these qualities in a higher degree than any other form. Were the pictures which have been drawn by the political jealousy of some among us faithful likenesses of the human character, the inference would be, that there is not sufficient virtue among men for self-government; and that nothing less than the chains of despotism can restrain them from destroying and devouring one another.

The aim of every political constitution is, or ought to be, first to obtain for rulers men who possess most wisdom to discern, and most virtue to pursue, the common good of the society, and in the next place, to take the most effectual precautions for keeping them virtuous whilst they continue to hold their public trust. The elective mode of obtaining rulers is the characteristic policy of republican government. The means relied on in this form of government for preventing their degeneracy are numerous and various. The most effectual one is such a limitation of the term of appointments as will maintain a proper responsibility to the people.