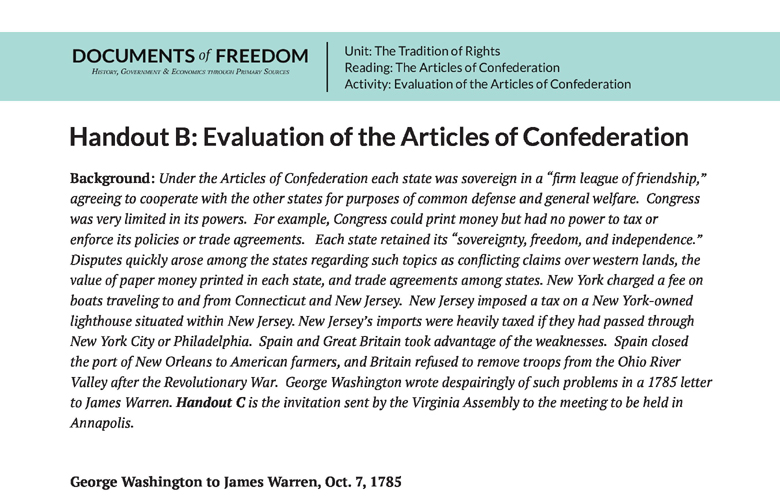 Handout B: Evaluation of the Articles of Confederation

Background: Under the Articles of Confederation each state was sovereign in a “firm league of friendship,” agreeing to cooperate with the other states for purposes of common defense and general welfare. Congress was very limited in its powers. For example, Congress could print money but had no power to tax or enforce its policies or trade agreements. Each state retained its “sovereignty, freedom, and independence.” Disputes quickly arose among the states regarding such topics as conflicting claims over western lands, the value of paper money printed in each state, and trade agreements among states. New York charged a fee on boats traveling to and from Connecticut and New Jersey. New Jersey imposed a tax on a New York-owned lighthouse situated within New Jersey. New Jersey’s imports were heavily taxed if they had passed through New York City or Philadelphia. Spain and Great Britain took advantage of the weaknesses. Spain closed the port of New Orleans to American farmers, and Britain refused to remove troops from the Ohio River Valley after the Revolutionary War. George Washington wrote despairingly of such problems in a 1785 letter to James Warren. Handout C is the invitation sent by the Virginia Assembly to the meeting to be held in Annapolis.

The war, as you have very justly observed, has terminated most advantageously for America, and a fair field is presented to our view; but I confess to you freely, My Dr. Sir, that I do not think we possess wisdom or Justice enough to cultivate it properly. Illiberality, Jealousy, and local policy mix too much in all our public councils for the good government of the Union. In a word, the confederation appears to me to be little more than a shadow without the substance; and Congress a nugatory [trivial, inconsequential] body, their ordinances being little attended to…

[W]e have abundant reason to be convinced, that the spirit for Trade which pervades these States is not to be restrained; it behooves us then to establish just principles; and this, any more than other matters of national concern, cannot be done by thirteen heads differently constructed and organized. The necessity, therefore, of a controlling power is obvious; and why it should be withheld is beyond my comprehension….