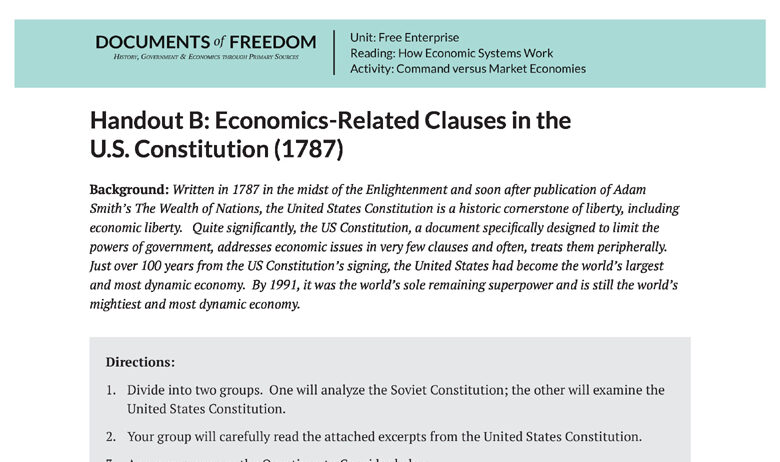 Handout B: Economics-Related Clauses in the U.S. Constitution (1787)

Background: Written in 1787 in the midst of the Enlightenment and soon after publication of Adam Smith’s The Wealth of Nations, the United States Constitution is a historic cornerstone of liberty, including economic liberty. Quite significantly, the US Constitution, a document specifically designed to limit the powers of government, addresses economic issues in very few clauses and often, treats them peripherally. Just over 100 years from the US Constitution’s signing, the United States had become the world’s largest and most dynamic economy. By 1991, it was the world’s sole remaining superpower and is still the world’s mightiest and most dynamic economy.

When reading these constitutional clauses, consider the following:

Excerpts from the U.S. Constitution

Article 1, Section 8 states that Congress shall have the power “To regulate commerce with foreign nations, and among the several states, and with the Indian tribes…”1

Article I, Section 8 states that Congress shall have the power “To coin Money, regulate the value thereof…” and “To provide for the Punishment of counterfeiting the Securities and current Coin of the United States.”

Article I, Section 10 gives Congress the power exclusively to coin money by stating that “No State shall…coin Money.”2

Article I, Section 8 states that Congress shall have the power “To promote the Progress of Science and useful Arts, by securing for limited Times to Authors and Inventors the exclusive Right to their respective Writing and Discoveries.”3

Article I, Section 9 states, “No Bill of Attainder or ex post facto Law shall be passed.”

Article I, Section 10 states, “No state shall…pass any Bill of Attainder, ex post facto Law, or Law impairing the Obligations of Contracts.”4

Article I, Section 9 states, “No Tax or Duty shall be laid on Articles exported from any State.”

Article I, Section 10 states, “No State shall without the Consent of the Congress, lay any Imposts or Duties on Imports or Exports.”5

The Searches and Seizures Clause

Amendment IV states, “The right of the people to be secure in their persons, houses, papers, and effects, against unreasonable searches and seizures, shall not be violated.”6

Due Process of Law Clauses

Amendment V states, “No person shall…be deprived of life, liberty, or property, without due process of law; nor shall private property be taken for public use, without just compensation.7

1The federal government regulated commerce in order to simplify and facilitate trade with foreign countries, among the states, and with Native Americans.

2The power to coin money was to facilitate trade among the states. A single, universally-acceptable, currency would make it much easier to trade among states.

3Copyright law enables artists to keep property rights over their works for a certain time. The Founders realized that this was a necessary incentive to encouraging innovation.

4These clauses ensure that the state may not make contracts.

5These are the key clauses that supported the world’s first modern free trade zone and lead to the incredibly rapid growth of the U.S. economy to become the world’s most powerful.

6This amendment makes it clear that the state may not violate private, personal property.

7This amendment makes it clear that the state may not arbitrarily take private property and, if it must, it must compensate the owner appropriately.