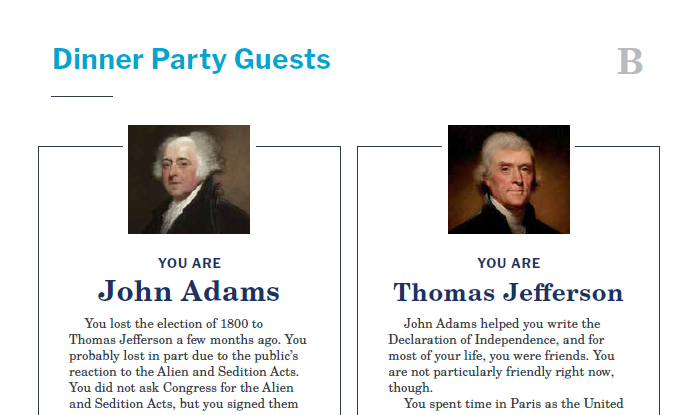 (Cut and Printable Cards in PDF)

You are: John Adams

You lost the election of 1800 to Thomas Jefferson a few months ago. You probably lost in part due to the public’s reaction to the Alien and Sedition Acts. You did not ask Congress for the Alien and Sedition Acts, but you signed them into law and enforced them. Explaining your decision, you said, “A pen is certainly an excellent instrument to fix a man’s attention and to inflame his ambition. …I knew there was a need of [the Sedition Act] and I consented.”

You did not want to go to war with France, even though members of your party were calling for it But you also did not want the French revolution to gain support in the US. Before becoming President, you spent years in diplomatic roles in pre-revolutionary France. You believed the ideas fueling the French Revolution were extremely dangerous.

All of the newspaper publishers arrested under the sedition portion of the Alien and Sedition Acts were supporters of Thomas Jefferson. You and Jefferson were good friends for most of your lives, but by the 1790s he had become your political opponent. You have serious disagreements with Jefferson, and you also think he is a Francophile.

You are: Thomas Jefferson

John Adams helped you write the Declaration of Independence, and for most of your life, you were friends. You are not particularly friendly right now, though.

You spent time in Paris as the United States’ minister to France, from 1784-1789. You were friends with John and Abigail Adams, who were also in France during part of that time. You sometimes flirted with Mrs. Adams.

When the revolution began in France, you supported the revolutionaries. You hated the excesses of the revolution even before the Reign of Terror, but you believed their attempt to establish a republic gave hope to the world.

You ran for President in 1800 and defeated John Adams. You hired journalists, including James Callender, to smear Adams in the press.

You are: James Madison

You are the “Father of the Constitution” and the author of the Bill of Rights. You strongly disapprove of the Alien and Sedition Acts and believe they are unconstitutional.

Together with Thomas Jefferson, you wrote the Virginia and Kentucky Resolutions, which condemned the Alien and Sedition Acts. In the Virginia Resolution, you said that the laws attacked the “right of free communication among the people,” and that the First Amendment’s protection of free speech and press were “the guardian of every other right.”

You became Thomas Jefferson’s Secretary of State when he was elected President. You worked hard to keep the United States neutral in the ongoing wars between France and England. You went on to become the fourth President of the United States.

You are: Abigail Adams

You are John Adams’s wife. In the 1780s you spent time living in France with your husband. During that time you became friends with Thomas Jefferson.

You supported your husband’s decision to sign the Alien and Sedition Acts. At times, you feared for his safety. In a letter to your husband, you wrote that you wished US law were strong enough “to punish the stirrer up of sedition.” You believed that a “strong sedition bill” would help bring the country “peace and harmony.”

You wrote to your sister about your fear of mobs in Philadelphia. You wrote of one journalist, “[He] is cursing and abusing daily. If that fellow [and others] are not suppressed, we shall come to a civil war.”

Though you were once close and even flirted a little bit, you have not forgiven Jefferson for his attacks on your husband. You accused Jefferson of helping spread “the blackest calumny and foulest falsehoods.”

You are: James Callender

You are a Scottish journalist living in Richmond, Virginia. Some call you a “scandalmonger.” After reading your work in Europe, Thomas Jefferson paid you to publish negative things about John Adams.

In print, you called Adams “mentally deranged,” and “a hideous hermaphroditical character, which has neither the force of a man, nor the gentleness and sensibility of a woman.” You also wrote that he was planning to crown himself king.

By printing these articles, you violated the Alien and Sedition Acts. You were arrested, convicted, and jailed for nine months in Richmond. President Jefferson later pardoned you along with all others convicted under the Acts.

You are: Timothy Pickering

You are John Adams’s Secretary of State. You support the Alien and Sedition Acts. Furthermore, you think Thomas Jefferson and James Madison are wrong to argue they are unconstitutional.

You believe the Alien and Sedition Acts were constitutional measures to protect national security. You also do not accept the charge that they violated the First Amendment.

You said, “Because we have the right to speak and publish our opinions, it does not necessarily follow that we may exercise it in uttering false and malicious slanders against our neighbor or our government, any more than we may under cover of freedom of action knock down the first man we meet, and exempt ourselves from punishment by pleading that we are free agents.”