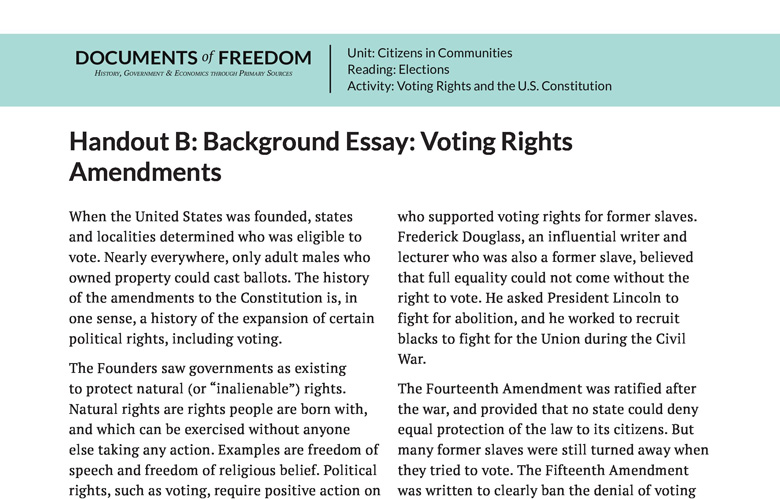 When the United States was founded, states and localities determined who was eligible to vote. Nearly everywhere, only adult males who owned property could cast ballots. The history of the amendments to the Constitution is, in one sense, a history of the expansion of certain political rights, including voting.

The Founders saw governments as existing to protect natural (or “inalienable”) rights. Natural rights are rights people are born with, and which can be exercised without anyone else taking any action. Examples are freedom of speech and freedom of religious belief. Political rights, such as voting, require positive action on the part of others – if you have a right to vote, then someone else must have the obligation to set up a polling place, count the votes, and do other things to secure that ability.

Many believe they have a constitutional right to vote in our democratic republic, but there is actually no such right listed in the Constitution. Rather, several amendments to the Constitution list conditions that the states cannot use to stop people from voting.

The Constitution may one day be amended to guarantee the right to vote, but the current document only says what the government cannot do to “deny or abridge” your rights.

Many of the individuals who fought against the institution of slavery were among those who supported voting rights for former slaves. Frederick Douglass, an influential writer and lecturer who was also a former slave, believed that full equality could not come without the right to vote. He asked President Lincoln to fight for abolition, and he worked to recruit blacks to fight for the Union during the Civil War.

The Fourteenth Amendment was ratified after the war, and provided that no state could deny equal protection of the law to its citizens. But many former slaves were still turned away when they tried to vote. The Fifteenth Amendment was written to clearly ban the denial of voting rights to former slaves. Ratified in 1870, it barred states from stopping people from voting on the basis of “race, color, or previous condition of servitude.”

Though former slaves could not constitutionally be barred from voting, many blacks who attempted to register to vote often faced harassment and violence. Fannie Lou Hamer, an African American woman from Mississippi, worked on voter registration drives in the mid-twentieth century. Guards at Montgomery County Jail beat her and fellow civil rights workers when she tried to register to vote in 1963. She spoke out at the Democratic presidential convention about people being illegally prevented from voting. A year later in 1965, President Johnson signed the Voting Rights Act into law, which many see as a fulfillment of the Fifteenth Amendment’s promise.

Women and the Seneca Falls Convention: The Nineteenth Amendment

The first American women’s rights convention was held in 1848 in Seneca Fall, New York. It was organized by Elizabeth Cady Stanton, Lucretia Mott, and others. Frederick Douglass and Sojourner Truth were among the 300 people in attendance.

Women suffragists continued to campaign for the vote and other rights for the next eighty years. During that time, many states approved votes for women at the state level. After the Nineteenth Amendment was ratified in 1920, states could not stop people from voting because they were female.

No constitutional amendment secures the right to vote for Native Americans. Through American history, many states imposed severe restrictions on the ability of Native Americans to vote. Many states passed laws that excluded those Native Americans living in traditional American Indian culture, requiring that voters prove that they were “civilized.”

The 1965 Voting Rights Act was amended in 1975 and 1982 to include federal protections for Native Americans.

The Twenty-Fourth Amendment prohibited states from stopping people who could not pay a poll tax from voting. Poll taxes had historically been used to keep poor African Americans from voting.

Finally, the Twenty-Sixth Amendment lowered the voting age from twenty-one to eighteen years of age. This amendment came during the Vietnam War in response to the objection that eighteen year-old men were being drafted into the military, yet had no right to vote.