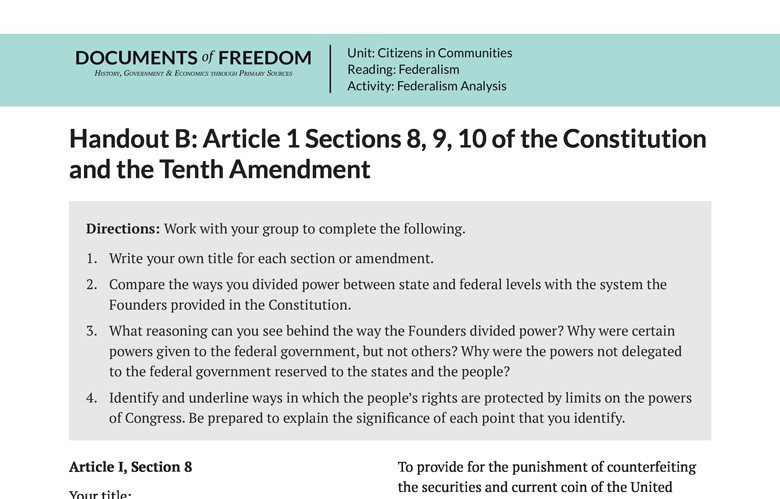 Handout B: Article 1 Sections 8, 9, 10 of the Constitution and the Tenth Amendment

Directions: Work with your group to complete the following.

To provide for the punishment of counterfeiting the securities and current coin of the United States;

To promote the progress of science and useful arts, by securing for limited times to authors and inventors the exclusive right to their respective writings and discoveries;

To provide for calling forth the militia to execute the laws of the union, suppress insurrections and repel invasions.

To exercise exclusive legislation in all cases whatsoever, over such District (not exceeding ten miles square) as may, by cession of particular states, and the acceptance of Congress, become the seat of the government of the United States, and to exercise like authority over all places purchased by the consent of the legislature of the state in which the same shall be, for the erection of forts, magazines, arsenals, dockyards, and other needful buildings;—And

The migration or importation of such persons as any of the states now existing shall think proper to admit, shall not be prohibited by the Congress prior to the year one thousand eight hundred and eight, but a tax or duty may be imposed on such importation, not exceeding ten dollars for each person.

No bill of attainder or ex post facto Law shall be passed.

No money shall be drawn from the treasury, but in consequence of appropriations made by law; and a regular statement and account of receipts and expenditures of all public money shall be published from time to time.

No title of nobility shall be granted by the United States: and no person holding any office of profit or trust under them, shall, without the consent of the Congress, accept of any present, emolument, office, or title, of any kind whatever, from any king, prince, or foreign state.

No state shall enter into any treaty, alliance, or confederation; grant letters of marque and reprisal; coin money; emit bills of credit; make anything but gold and silver coin a tender in payment of debts; pass any bill of attainder, ex post facto law, or law impairing the obligation of contracts, or grant any title of nobility.

No state shall, without the consent of the Congress, lay any imposts or duties on imports or exports, except what may be absolutely necessary for executing its inspection laws: and the net produce of all duties and imposts, laid by any state on imports or exports, shall be for the use of the treasury of the United States; and all such laws shall be subject to the revision and control of the Congress.

No state shall, without the consent of Congress, lay any duty of tonnage, keep troops, or ships of war in time of peace, enter into any agreement or compact with another state, or with a foreign power, or engage in war, unless actually invaded, or in such imminent danger as will not admit of delay.