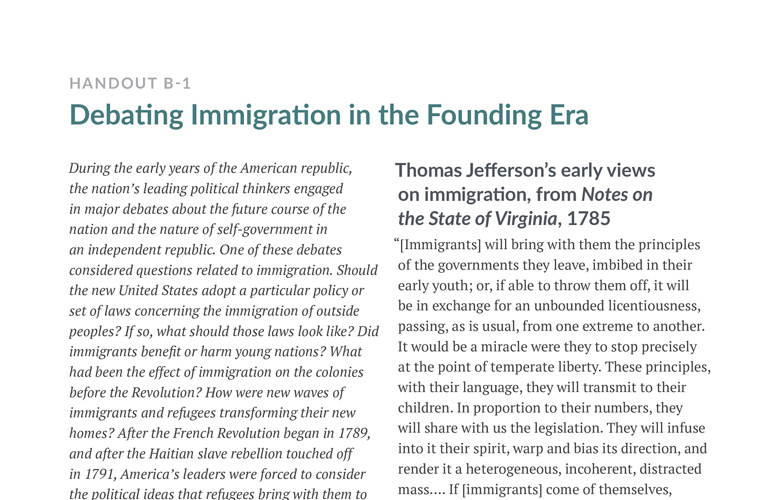 Debating Immigration in the Founding Era

During the early years of the American republic, the nation’s leading political thinkers engaged in major debates about the future course of the nation and the nature of self-government in an independent republic. One of these debates considered questions related to immigration. Should the new United States adopt a particular policy or set of laws concerning the immigration of outside peoples? If so, what should those laws look like? Did immigrants benefit or harm young nations? What had been the effect of immigration on the colonies before the Revolution? How were new waves of immigrants and refugees transforming their new homes? After the French Revolution began in 1789, and after the Haitian slave rebellion touched off in 1791, America’s leaders were forced to consider the political ideas that refugees bring with them to their new homes. This sparked a bitter feud between Federalist and Anti-Federalist factions.

General George Washington’s “Address to the Members of the Volunteer Association of Ireland and Other Inhabitants,” December 2, 1783

“The bosom of America is open to receive not only the Opulent and respectable Stranger, but the oppressed and persecuted of all Nations And Religions; whom we shall welcome to a participation of all our rights and privileges, if by decency and propriety of conduct they appear to merit the enjoyment.”

Thomas Jefferson’s early views on immigration, from Notes on the State of Virginia, 1785

“[Immigrants] will bring with them the principles of the governments they leave, imbibed in their early youth; or, if able to throw them off, it will be in exchange for an unbounded licentiousness, passing, as is usual, from one extreme to another. It would be a miracle were they to stop precisely at the point of temperate liberty. These principles, with their language, they will transmit to their children. In proportion to their numbers, they will share with us the legislation. They will infuse into it their spirit, warp and bias its direction, and render it a heterogeneous, incoherent, distracted mass…. If [immigrants] come of themselves, they are entitled to all the rights of citizenship: but I doubt the expediency of inviting them by extraordinary encouragements. I mean not that these doubts should be extended to the importation of useful artificers. The policy of that measure depends on very different considerations. Spare no expense in obtaining them.”

“My opinion with respect to emigration, is, that except of useful Mechanics and some particular descriptions of men or professions, there is no need of encouragement: while the policy or advantage of its taking place in a body (I mean the settling of them in a body) may be much questioned; for, by so doing, they retain the Language, habits and principles (good or bad) which they bring with them. Whereas by an intermixture with our people, they, or their descendants, get assimilated to our customs, measures and laws: in a word, soon become one people.”

Background: In his First Annual Message to Congress in 1801, President Jefferson spoke in favor of immigration to the U.S., criticizing attempts by the Federalists to make it difficult for immigrants to obtain citizenship.

“And shall we refuse the unhappy fugitives from distress that hospitality which the savages of the wilderness extended to our fathers arriving in this land? Shall oppressed humanity find no asylum on the globe? The constitution, indeed, has wisely provided that, for admission to certain offices of important trust, a residence shall be required sufficient to develop character and design. But might not the general character and capabilities of a citizen be safely communicated to every one manifesting a bona fide purpose of embarking his life and fortunes permanently with us? With restrictions, perhaps, to guard against the fraudulent usurpation of our flag…”

Background: Hamilton used the penname Lucius Crassus when he published this response to the president’s address.

“The influx of foreigners must, therefore, tend to produce a heterogeneous compound; to change and corrupt the national spirit; to complicate and confound public opinion; to introduce foreign propensities. In the composition of society, the harmony of the ingredients is all important, and whatever tends to a discordant intermixture must have an injurious tendency. […] Some reasonable term [of naturalization] ought to be allowed to enable aliens to get rid of foreign and acquire American attachments; to learn the principles and imbibe the spirit of our government; and to admit of a probability at least, of their feeling a real interest in our affairs. A residence of not less than five years ought to be required [in order to obtain citizenship].”