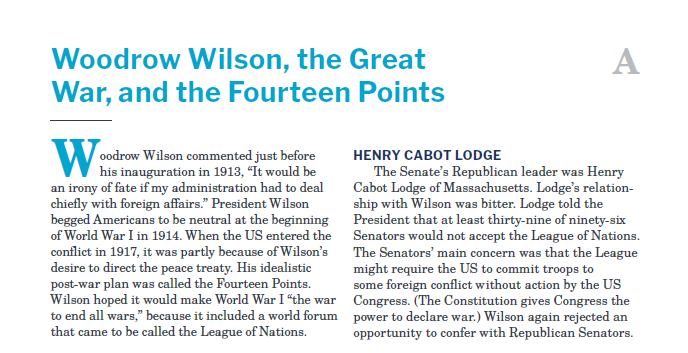 Woodrow Wilson, the Great War, and the Fourteen Points

Woodrow Wilson commented just before his inauguration in 1913, “It would be an irony of fate if my administration had to deal chiefly with foreign affairs.” President Wilson begged Americans to be neutral at the beginning of World War I in 1914. When the US entered the conflict in 1917, it was partly because of Wilson’s desire to direct the peace treaty. His idealistic post-war plan was called the Fourteen Points. Wilson hoped it would make World War I “the war to end all wars,” because it included a world forum that came to be called the League of Nations.

Compromise at the Conference

Even though the voters had elected Republicans to majorities in both Houses of Congress in November 1918, Wilson (a Democrat) believed that the American people favored the Fourteen Points. Wilson did not receive the “advice …of the Senate” on the plan because he failed to consult Senators before the peace conference, and invited no Republican Senators to accompany him to France.

Wilson arrived in France for treaty negotiations in January 1919, becoming the first President to engage personally in overseas diplomacy. Wilson was greeted by crowds as a hero. He stressed the unselfish motivation of the US to defend “the rights of mankind.” Once in the conference hall, though, he was treated with much less respect. He faced delegates from England and France, who wanted revenge against Germany. Both countries pushed Wilson to compromise on elements of the Fourteen Points. Wilson accepted the compromises, but insisted on the creation of the League of Nations. He trusted the League of Nations to end wars forever.

The Senate’s Republican leader was Henry Cabot Lodge of Massachusetts. Lodge’s relationship with Wilson was bitter. Lodge told the President that at least thirty-nine of ninety-six Senators would not accept the League of Nations. The Senators’ main concern was that the League might require the US to commit troops to some foreign conflict without action by the US Congress. (The Constitution gives Congress the power to declare war.) Wilson again rejected an opportunity to confer with Republican Senators.

The President’s Appeal to the People

In another departure from tradition, Wilson delivered the final bulky treaty to the Senate in person, urging rapid approval. However, Lodge and the Treaty’s other opponents knew that with time, popular support for the League was fading. When Lodge held lengthy hearings, delaying the Senate vote, Wilson appealed to the people themselves.

In spite of health problems, including atherosclerosis (hardening of the arteries), terrible headaches, and a weakened heart, Wilson embarked on a grueling speaking tour to educate the people. In September 1919, he left Washington, traveling 8,000 miles in twenty-two days. His health grew worse until he collapsed in Pueblo, Colorado, on September 25. As his train raced back toward Washington, Wilson suffered a severe stroke, causing paralysis from which he never fully recovered. Some historians believe the President’s direct appeal to the people had increased support for the Treaty. The people’s support for the Treaty did not matter in the end, however, because they did not have the constitutional power to ratify it. Wilson was unable to carry on. His wife and his doctor isolated the desperately ill President in order to protect him from further stress.

The End of the Treaty

The Treaty was now in the Senate’s hands. In November of 1919, the Senate adopted Lodge’s “Reservations”—conditions under which they would vote for the Treaty of Versailles. The “Reservationists” would support the treaty if it were modified to allow Congress to veto any League commitment of the US.

Never known for his adaptability, Wilson became even more stubborn after his strokes. When he read the Lodge document, Wilson said, “That cuts the very heart out of the Treaty; …it would humiliate the United States….” Wilson ordered Senate Democrats to vote against the treaty if it included the Lodge reservations. There was also a small group of “Irreconcilables,” who intended to vote against the Treaty in any form.

European leaders had accepted the Treaty with its League of Nations in June 1919, but the US Senate would not. On November 19, the Senate rejected the peace treaty—voting against it both with and without Lodge’s reservations.

Though the Treaty seemed to be dead, its supporters kept working. In February Wilson still refused to accept the reservations, even though Britain and France were willing to do so. He stated, “Either we should enter the League fearlessly, accepting with responsibility and not fear the role of leadership which we now enjoy, …or we should retire as gracefully as possible from the great concert of powers by which the world was saved.” In March, the Senate rejected the Treaty again.

Wilson consistently refused the advice of the Senate, and the Senate consistently refused to consent. Wilson asked the voters to make the November 1920 election a “solemn referendum” on the Treaty by voting for the Democratic candidate. However, the Republican candidate won by a huge margin. Americans were unwilling to take the world leadership role for which Wilson had worked so hard for.