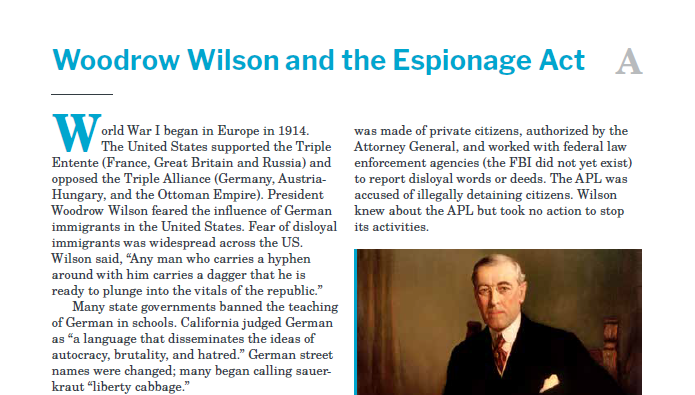 Woodrow Wilson and the Espionage Act

World War I began in Europe in 1914. The United States supported the Triple Entente (France, Great Britain and Russia) and opposed the Triple Alliance (Germany, Austria-Hungary, and the Ottoman Empire). President Woodrow Wilson feared the influence of German immigrants in the United States. Fear of disloyal immigrants was widespread across the US. Wilson said, “Any man who carries a hyphen around with him carries a dagger that he is ready to plunge into the vitals of the republic.”

Many state governments banned the teaching of German in schools. California judged German as “a language that disseminates the ideas of autocracy, brutality, and hatred.” German street names were changed; many began calling sauerkraut “liberty cabbage.”

Eventually, German u-boat (submarine) attacks, anti-German propaganda, and the possibility of a German alliance with Mexico made US entry into the war unavoidable for Wilson. On April 17, 1917, Wilson, who had campaigned for a second term with the slogan, “He kept us out of war,” asked Congress for a declaration of war against Germany. Congress granted his request two days later.

Civil Liberties during World War I

Wilson sent a conscription (military draft) bill to Congress prior to the declaration of war. The draft was detested by many lawmakers as a violation of civil liberties. Some in Congress called it “involuntary servitude,” and “another name for slavery.” The Speaker of the House said there was “little difference between a conscript and a convict”—both had lost their liberty. Despite the initial controversy, Congress passed the Selective Service Act in May, six weeks after the declaration of war. The Supreme Court upheld the constitutionality of the law.

Challenges to Bill of Rights protections for people accused of crimes came with the American Protective League (APL). This group was made of private citizens, authorized by the Attorney General, and worked with federal law enforcement agencies (the FBI did not yet exist) to report disloyal words or deeds. The APL was accused of illegally detaining citizens. Wilson knew about the APL but took no action to stop its activities.

Challenges to the First Amendment

One of the most serious limitations of freedom of speech and press came with the Espionage Act of 1917. This law made it a crime to “cause or attempt to cause insubordination, disloyalty, mutiny, refusal of duty, in the military or naval forces of the United States, or shall wilfully obstruct the recruiting or enlistment service of the United States.”

In October of 1917, Wisconsin Senator Robert LaFollette defended freedom of speech in wartime. He said, “I think all men recognize that in time of war the citizen must surrender some rights for the common good which he is entitled to enjoy in time of peace. But sir, the right to control their own Government according to constitutional forms is not one of the rights that the citizens of this country are called upon to surrender in time of war. …I am contending, Mr. President, for the great fundamental right of the sovereign people of this country to make their voice heard and have that voice heeded upon the great questions arising out of this war.”

In the landmark case Schenck v. United States (1919), the Supreme Court upheld the Espionage Act. In a unanimous ruling, the Court held that while such a limit on the First Amendment would not be constitutional in peacetime, the law was constitutional because the nation was at war. The government’s interest in fighting World War I outweighed individuals’ right to free speech.

The challenges to civil liberties in the US did not end with the conclusion of hostilities. In 1920, Attorney General A. Mitchell Palmer ordered raids on homes, meeting places, and offices of suspected radicals. Palmer said in 1920, “The tongues of revolutionary heat were licking the altars of the churches, leaping into the belfry of the school bell, crawling into the sacred corners of American homes, seeking to replace marriage vows with libertine laws, burning up the foundations of society.” Six-thousand people, mostly foreign-born, were arrested in the Palmer Raids, as they came to be known.

The 1918 Sedition amendments to the Espionage Act were repealed in 1921. Much of the original 1917 Act, however, remains federal law.