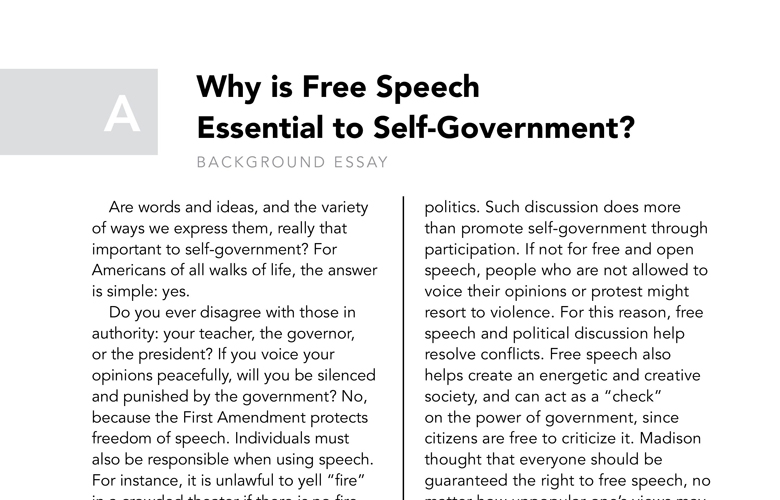 Why is Free Speech Essential to Self-Government? Background Essay

Are words and ideas, and the variety of ways we express them, really that important to self-government? For Americans of all walks of life, the answer is simple: yes.

Do you ever disagree with those in authority: your teacher, the governor, or the president? If you voice your opinions peacefully, will you be silenced and punished by the government? No, because the First Amendment protects freedom of speech. Individuals must also be responsible when using speech. For instance, it is unlawful to yell “fire” in a crowded theater if there is no fire.

Why Does the Bill of Rights Protect Speech?

“A man has a property in his opinions and the free communication of them,” James Madison wrote in 1792. To Madison, people not only owned their thoughts, but owned the right to express them as well. This right—so important to the principles of liberty and self-government—is protected in the Bill of Rights because the British had long censored political debate. The Founders knew how powerful speech could be.

Madison dreamed of a society in which citizens vigorously and fully participate in discussions about politics. Such discussion does more than promote self-government through participation. If not for free and open speech, people who are not allowed to voice their opinions or protest might resort to violence. For this reason, free speech and political discussion help resolve conflicts. Free speech also helps create an energetic and creative society, and can act as a “check” on the power of government, since citizens are free to criticize it. Madison thought that everyone should be guaranteed the right to free speech, no matter how unpopular one’s views may be.

How Does Free Speech Promote a More Peaceful and Self-Governing Society?

The First Amendment protects four ways for citizens to participate in the public exchange of ideas. These are the rights to free speech, assembly, petition, and press.

The freedom of Americans to express their opinions creates a more stable society. Groups— even unpopular ones—have a chance to express their views and persuade their fellow citizens. In return, their views are open to challenge in a fair manner. This dialogue decreases the chance that people with extreme views will turn to violence when their ideas go unheard.

The danger of tyranny [an individual or small group seizing control of government and forcing their beliefs on others] is smaller when citizens believe they’ve had a fair hearing, even if they fail to convince their fellow citizens.

Self-government is not possible when speech is censored. If citizens cannot challenge their government and leaders, the chances increase that government will not serve the people. Sharing ideas and being part of the political process gives citizens the chance to tell officials how they want the government to act. People can hold elected officials accountable by publicly questioning their activities and joining with others to demand a better, more honest government that acts in the best interests of the people.

Along with the right to free speech, the First Amendment’s protection of a free press educates citizens about abuses of power and allows them to right such wrongs by voting. These crucial rights to free speech and free press are the first line of defense in the preservation of self-government.

Does the First Amendment Protect All Speech?

While the First Amendment provides broad protections of speech, it does not protect all types of speech. The Supreme Court has worked to make clear the meaning of the freedom of speech—and its boundaries—over the past century.

In Brandenburg v. Ohio (1969), the Supreme Court drew one such boundary of First Amendment protection. In this case Brandenburg, a Ku Klux Klan leader, was seen on film giving a speech that the State of Ohio claimed violated its law against advocating violence. In his speech, he mentioned what he called “revengeance,” but ultimately he called for a July 4th march in the nation’s capital. The Supreme Court ruled that Brandenburg’s speech was protected by the First Amendment, but in doing so created a limit on free speech. While Brandenburg might have encouraged unlawful action, he did not encourage “imminent lawless action,” or immediate illegal behavior. If he had, his speech would not, the Court ruled, have been protected speech.

There are other boundaries as well. The First Amendment does not protect speech that intentionally spreads lies about someone’s character. It does not protect speech that intentionally puts others in danger, like speech that is likely to start a riot, incite a panic, or otherwise threaten public safety. The government may outlaw certain types of obscenity [bad words or curse words] and put into place “decency” standards that limit the things said or done on public airwaves during certain viewing/listening times, all without violating the First Amendment. Speech that threatens national security, like publicly revealing troop movements, can also be limited. Finally, all speech may be subject to reasonable time, place and manner restrictions, so long as such restrictions are applied to all individuals or groups, regardless of their particular message.

The Constitution and You

Other types of speech are highly debated throughout the nation. For instance, some people believe that “hate speech” [speech against a specific group] should not be protected by the First Amendment. But others argue that all speech, no matter how offensive, should remain protected, because prosecuting what some call “hate speech” may limit the right to express negative views and, therefore, could limit citizens’ right to free speech.

The First Amendment was designed by the Founders to protect YOUR ability to participate in self-government and live in peace with those who think differently from you. While our Founders ultimately meant to protect political speech, the scope of the First Amendment has grown over the years. It now protects the variety of ways you “express” yourself, including ways beyond spoken or written words. Freedom of speech is one of the first and most important ways you participate in society, and it is essential to the success of a free republic.