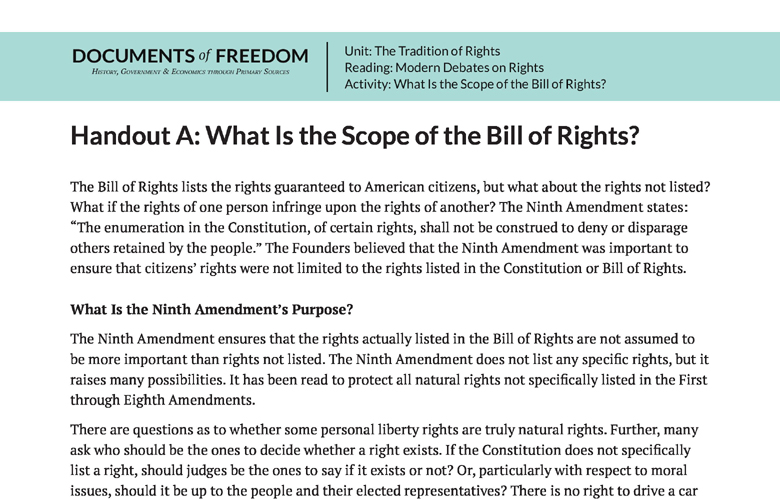 Handout A: What Is the Scope of the Bill of Rights?

What Is the Ninth Amendment’s Purpose?

There are questions as to whether some personal liberty rights are truly natural rights. Further, many ask who should be the ones to decide whether a right exists. If the Constitution does not specifically list a right, should judges be the ones to say if it exists or not? Or, particularly with respect to moral issues, should it be up to the people and their elected representatives? There is no right to drive a car listed in the Bill of Rights. Some people claim, though, that the Ninth Amendment protects citizens’ right to drive. The Supreme Court has been hesitant to use Ninth Amendment claims alone when deciding cases. They have looked for other support of rights in the Bill of Rights and Constitution.

People often talk about a right to privacy. This is not among the rights explicitly mentioned in the Bill of Rights or elsewhere in the Constitution. But most people feel that privacy and the right to make personal choices are part of being free. The Supreme Court has indeed found some kinds of privacy to be a right that the Ninth Amendment protects.

Modern “privacy” constitutional law began in 1965. The Supreme Court cited the Ninth Amendment when it struck down a state law banning the use of birth control. The ban applied to married couples as well as singles. In Griswold v. Connecticut (1965), the Court determined that the Ninth Amendment protects privacy within marriage. The Court said, “We deal with a right of privacy older than the Bill of Rights…To hold that a right so basic and fundamental and so deep-rooted in our society as the right of privacy in marriage may be infringed because that right is not guaranteed in so many words by the first eight amendments…is to ignore the Ninth Amendment and to give it no effect whatsoever.”

Like most cases about the Ninth Amendment, the Court found further constitutional basis for its decision. In Griswold, the Court cited the First, Third, Fourth, and Fifth Amendments as creating a “zone of privacy.”

What Are Reproductive Rights?

The Supreme Court built on Griswold and the zone of privacy. It used the Ninth and Fourteenth Amendments in the reasoning of Roe v. Wade (1973). It reaffirmed a right to privacy when it recognized a woman’s right to an abortion. “This right of privacy, whether it be founded in the Fourteenth Amendment’s concept of personal liberty and restrictions upon state action, as we feel it is, or, as the District Court determined, in the Ninth Amendment’s reservation of rights to the people, is broad enough to encompass a woman’s decision whether or not to terminate her pregnancy.”

Some argue that the Court decided Roe v. Wade incorrectly. They maintain that the Constitution is silent on the issue of abortion. They believe, therefore, it is up to state legislatures to decide the matter. Others believe life begins at conception and therefore the embryo or fetus has inalienable rights. They argue that a woman’s privacy rights need to be balanced against the right to life of the embryo, fetus, or unborn child.

Do You Have a Right to Die? To Take Drugs?

Other issues alleging personal liberty continue to be debated. As was the case in Griswold and Roe, many personal liberty cases hinge on privacy. For that reason, they are often about actions that are personal and intimate. For example, the Court said states could outlaw homosexual activity in Bowers v. Hardwick (1986), but reversed this decision in Lawrence v. Texas (2003). In United States v. Windsor (2013) case, the Court determined that the Defense of Marriage Act was unconstitutional. The decision asserted that the federal government must recognize same-sex marriages and same-sex spouses equally.

Few things are as personal as death. Should terminally ill people be able to ask their doctor to help them die? The Court has rejected a doctor’s argument that a person had a constitutional right to physician-assisted suicide. States could allow assisted suicide, the Court said, but the Constitution granted no such right.

Some people demand that they have a right to take whatever medicine they wish, even ones that have not yet been approved by the United States Food and Drug Administration. Opponents argue that the federal government has a duty to make sure all of the country’s medicine is safe and effective.