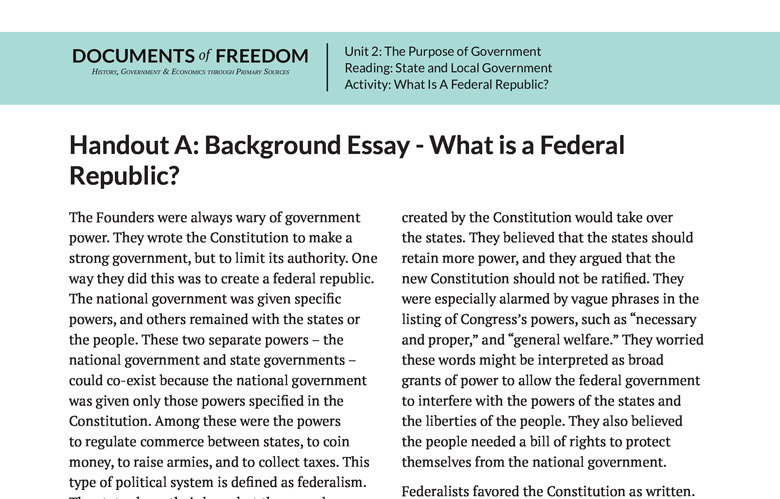 Handout A: Background Essay – What is a Federal Republic?

The Founders were always wary of government power. They wrote the Constitution to make a strong government, but to limit its authority. One way they did this was to create a federal republic. The national government was given specific powers, and others remained with the states or the people. These two separate powers – the national government and state governments – could co-exist because the national government was given only those powers specified in the Constitution. Among these were the powers to regulate commerce between states, to coin money, to raise armies, and to collect taxes. This type of political system is defined as federalism. The states have their laws, but they are also subject to the laws of the federal government. This separation gives the states greater autonomy to create laws based on the will of their citizenry.

The two major political groups at the time of the Founding were the Federalists and the Anti-Federalists. They disagreed about the new distribution of power. Many Anti-Federalists had been happy with the Articles of Confederation and feared that the new central government created by the Constitution would take over the states. They believed that the states should retain more power, and they argued that the new Constitution should not be ratified. They were especially alarmed by vague phrases in the listing of Congress’s powers, such as “necessary and proper,” and “general welfare.” They worried these words might be interpreted as broad grants of power to allow the federal government to interfere with the powers of the states and the liberties of the people. They also believed the people needed a bill of rights to protect themselves from the national government.

The Federalists eventually won the debate when the Constitution was ratified (approved) in 1789 by the required number of states, but calls for a bill of rights continued. In fact, eight states submitted lists of proposed amendments along with their ratifications. The one amendment proposed by all was the principle now contained in the Tenth Amendment.

Changes to Our Federal System

The Seventeenth Amendment further changed the balance of federalism when it was added to the Constitution in 1913. The Seventeenth Amendment provided for the direct election of Senators to U.S. Congress by the people of each state. State governments would no longer be represented in one house of Congress. Supporters of this change believed it resulted in a more democratic society. Critics argued that the change resulted in more federal laws that infringed on the powers of states or that carried mandates with no funding attached.

The 1954 Supreme Court case Brown v. Board of Education marked the beginning of the Civil Rights Movement toward equal treatment in public life and the end of the Jim Crow period. Later federal legislation intended to correct civil rights violations by states included the Civil Rights Act (1964) and the Voting Rights Act (1965). These laws and the enforcement of them came almost a century after the passage of the Fourteenth Amendment.

The Debate over Federalism

Debates over federalism often turn to other topics. Critics of federalism argue that a strong national government is needed to address unequal treatment by states. A patchwork of laws across the country makes it difficult for individuals and families who travel or move. Supporters of federalism argue that state power allows the states to make policies that meet the needs of their citizens, or to adopt successful policies from other states. What is acceptable for the people in some states—casinos and gambling, for example—may not be welcome in others. Finally, some supporters of federalism ask: why would the people elected to federal offices do any better at protecting rights than people in states offices would? The answer to these questions, they say, is not to trust certain leaders more than others, but to hold all officials accountable to the requirements set by the Constitution.

The Founders believed, like many political philosophers, that the desire for power was a natural human tendency. This power could be used to do bad things as easily as it could be used to do good things. The American federal system was designed to prevent abuses of power and protect freedom. Neither a very strong federal system nor complete state independence has been shown to be perfect. Finding the right balance of power has been vital to liberty—as well as controversial—throughout our history.