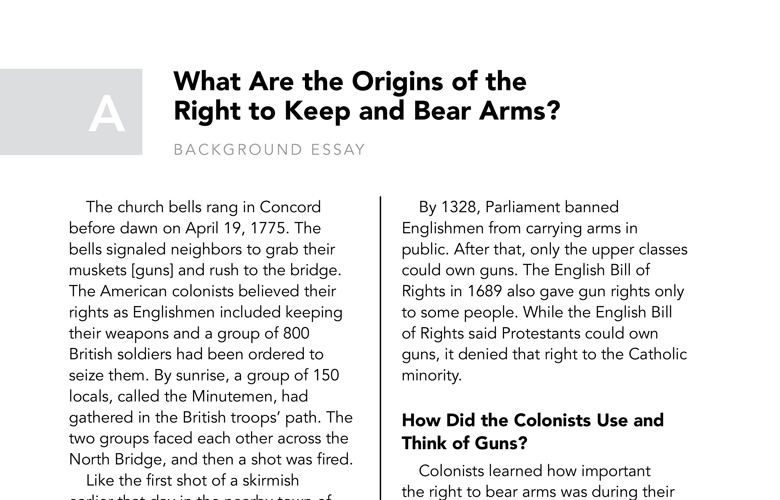 The church bells rang in Concord before dawn on April 19, 1775. The bells signaled neighbors to grab their muskets [guns] and rush to the bridge. The American colonists believed their rights as Englishmen included keeping their weapons and a group of 800 British soldiers had been ordered to seize them. By sunrise, a group of 150 locals, called the Minutemen, had gathered in the British troops’ path. The two groups faced each other across the North Bridge, and then a shot was fired.

Like the first shot of a skirmish earlier that day in the nearby town of Lexington, it was a “shot heard around the world.” The American Revolution began in defense of the right to bear arms [to keep and use weapons]. The Founders remembered this right twelve years later when they wrote the Second Amendment to the Constitution.

What Were English Origins?

The right to bear arms in England existed before 1066. The tradition of militia, or groups of citizens trained to use weapons for defense, also existed in medieval England. English law required men who owned land to have weapons and serve in their baron’s militia. But as new religious and political ideas emerged, the government began to limit the right to bear arms.

How Did the Colonists Use and Think of Guns?

Colonists learned how important the right to bear arms was during their revolution against Britain. Trained militias of citizens were the colonies’ first defense against British soldiers. The Sons of Liberty, a group of colonists who took the lead in resisting the British, and other individual colonists fought the British before Congress was able to gather, train, and prepare the Continental Army. After the Revolution was over, their experience in the war would remind Americans of the importance of the right to bear arms

During the Revolution, many people owned guns. But the Founders did not think everyone had the right to bear arms or that the right was unlimited. Slaves could never own them and were allowed to use them only in special circumstances. Many colonies said women, free blacks, and Roman Catholics could not own them. States still denied free blacks the right to own and use guns after the Revolution, fearing they might become violent towards white landowners.

States also did not want a federal standing army. A standing army is a permanent military group kept in times of peace as well as war. The states demanded that they keep control of their own militia units to protect themselves from federal tyranny. Adding the Second Amendment in the Bill of Rights was a way to protect states and individuals from a central government with too much power.

What Are Interpretations of the Second Amendment?

The second issue revolves around the definition of “militia.” Some scholars argue that the militia of the Second Amendment means state armies, like today’s National Guard. According to this argument, the Second Amendment does not grant an individual’s right when it refers to “the right of the people to keep and bear arms.” Instead, they say the Second Amendment simply protects state militias from the federal government, as the Anti-Federalists had insisted.

Others believe “militia” means a group of citizens. Since there was no official army or police force, some scholars argue that the “militia” was individual citizens who could be called to protect themselves and their neighbors. As George Mason, author of Virginia’s Declaration of Rights, said in 1788, “what is the militia? It is the whole people, except for a few public officers.”

Finally, does the Second Amendment mean “individuals” when it refers to “the people”? In United States v. Verdugo-Urquidez (1990), the Supreme Court said it does. The term, “‘the people’…refers to a class of persons who are part of a national community.” The First District Court upheld an individual right to bear arms in United States v. Emerson (1999).

Whether the Second Amendment was meant to protect militias or individuals is not perfectly clear. But one thing is certain: without the right to bear arms, the colonists would never have won the Revolutionary War.