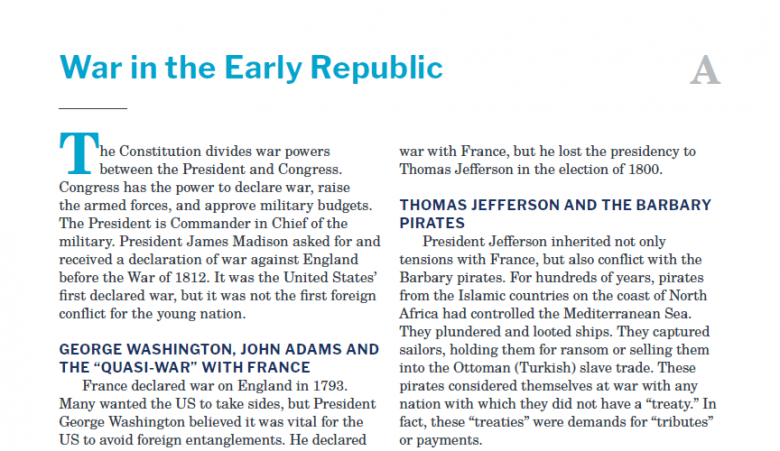 War in the Early Republic

The Constitution divides war powers between the President and Congress. Congress has the power to declare war, raise the armed forces, and approve military budgets. The President is Commander in Chief of the military. President James Madison asked for and received a declaration of war against England before the War of 1812. It was the United States’ first declared war, but it was not the first foreign conflict for the young nation.

George Washington, John Adams, and the “Quasi-War” with France

France declared war on England in 1793. Many wanted the US to take sides, but President George Washington believed it was vital for the US to avoid foreign entanglements. He declared that the United States would stay neutral. This “neutrality proclamation” set off a firestorm of debate. Did the President have the constitutional power to declare neutrality, or was this something only Congress could direct? The debate settled with most taking Washington’s view that it was the executive’s job to direct the nation’s foreign policy, and not lawmakers’.

The fighting between France and England raged. John Adams was elected President in 1800. France suspended commerce with the US, and seized hundreds of American ships. Congress appropriated money to increase the navy and authorized raising a provisional army.

In his constitutional role as director of the nation’s foreign affairs, the President is sometimes called the nation’s “Chief Diplomat.” Adams used diplomacy to try to avoid war. In 1797, Adams sent the ambassadors he had appointed to France. France demanded a bribe, so the American diplomats left. The XYZ Affair (as it came to be called as the French diplomats were unnamed) inflamed many Americans’ desire for war. In the end, Adams succeeded in avoiding war with France, but he lost the presidency to Thomas Jefferson in the election of 1800.

Thomas Jefferson and the Barbary Pirates

President Jefferson inherited not only tensions with France, but also conflict with the Barbary pirates. For hundreds of years, pirates from the Islamic countries on the coast of North Africa had controlled the Mediterranean Sea. They plundered and looted ships. They captured sailors, holding them for ransom or selling them into the Ottoman (Turkish) slave trade. These pirates considered themselves at war with any nation with which they did not have a “treaty.” In fact, these “treaties” were demands for “tributes” or payments.

The British fleet had defended American ships from the Barbary pirates while it was part of England. Once the US won its independence, however, US ships were on their own. Congress appropriated money for “tributes” as early as 1784, but the attacks continued. By 1794, the pirates were holding dozens of US citizens for ransom. Thomas Jefferson, who was then Washington’s Secretary of State, advised Congress to declare war on the pirates. Congress did not heed his advice. President Washington sent diplomats to negotiate for the prisoners’ release, but with no success.

When John Adams became President in 1797, he continued paying the pirates. Congress continued to authorize payments. By the turn of the century, Congress was paying twenty percent of the US’s annual budget to the pirates. Thomas Jefferson took office in 1801.

Jefferson, who believed that paying off the pirates only led to more demands, announced that there would be no more tributes paid. Tripoli demanded more money, but Jefferson refused to pay. Tripoli declared war on the US.

Jefferson announced in his First Annual Message to Congress, “Tripoli, the least considerable of the Barbary States, had come forward with demands unfounded either in right or in compact, and had [threatened] war, on our failure to comply before a given day. The style of the demand admitted but one answer. I sent a small squadron of frigates into the Mediterranean….”

Jefferson took this defensive military action as Commander in Chief without seeking a declaration of war from Congress. He believed that a broader response would be needed, and so he asked Congress for a formal resolution. In response, Congress authorized an expanded force. This force succeeded in subduing the pirates, at least temporarily.

President James Madison was elected in 1808. Tensions with England were high, as they had been for the last thirty years. The US objected to impressment (forced recruitment) of American sailors into British ships, as well as British blockades on American trade. Britain was also helping American Indians in the Northwest to challenge US westward expansion.

Madison believed the US had two choices: go to war against a much more powerful navy, or submit and confirm what many in the world believed—that the US was not to be taken seriously as an independent nation.

Madison asked Congress for a declaration of war against England. His message read in part, “Whether the United States shall continue passive under [England’s] … accumulating wrongs, or, opposing force to force in defense of their national rights, shall commit a just cause into the hands of the Almighty Disposer of Events… is a solemn question which the Constitution wisely confides to the legislative department of the Government….” Congress took Madison’s recommendation and declared war between the US and England. The President of the United States was “authorized to use the whole land and naval force of the United States to carry the same into effect.”

The war was unpopular and, most agree, managed badly by Madison. The hostilities ended in a stalemate in early 1815, but the world could no longer deny that the US was an independent power to be taken seriously. For this reason, some have called the War of 1812 “the second revolutionary war.”