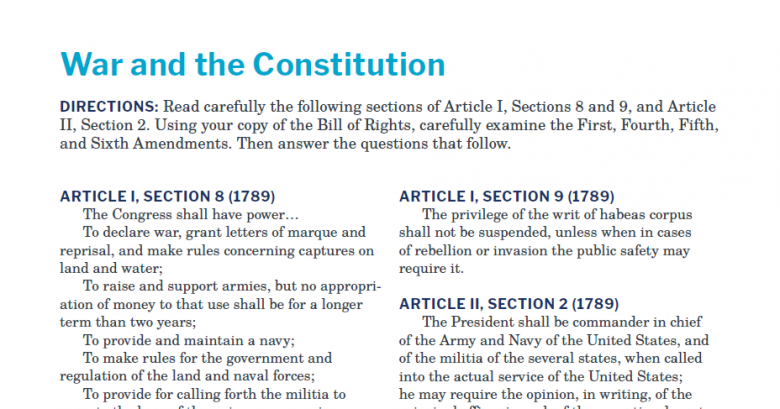 War and the Constitution

Directions: Read carefully the following sections of Article I, Sections 8 and 9, and Article II, Section 2. Using your copy of the Bill of Rights, carefully examine the First, Fourth, Fifth, and Sixth Amendments. Then answer the questions that follow.

The Congress shall have power…

To provide for organizing, arming, and disciplining, the militia, and for governing such part of them as may be employed in the service of the United States, reserving to the states respectively, the appointment of the officers, and the authority of training the militia according to the discipline prescribed by Congress…

The President shall be commander in chief of the Army and Navy of the United States, and of the militia of the several states, when called into the actual service of the United States; he may require the opinion, in writing, of the principal officer in each of the executive departments, upon any subject relating to the duties of their respective offices, and he shall have power to grant reprieves and pardons for offenses against the United States, except in cases of impeachment.

He shall have power, by and with the advice and consent of the Senate, to make treaties, provided two thirds of the Senators present concur…