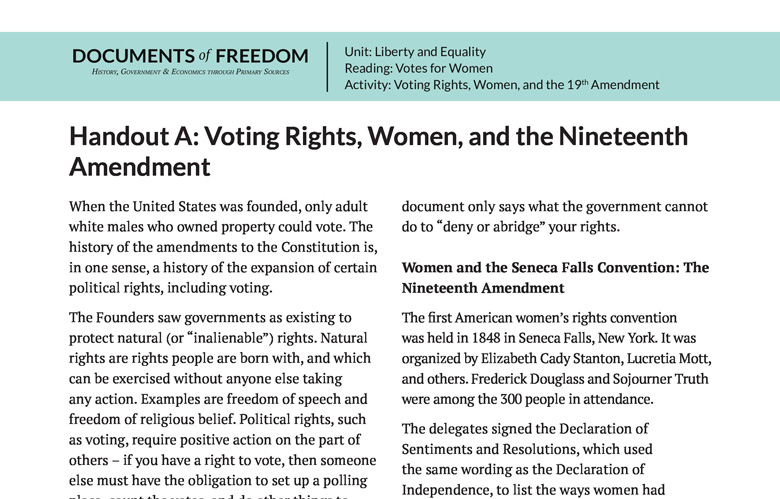 Handout A: Voting Rights, Women, and the Nineteenth Amendment

When the United States was founded, only adult white males who owned property could vote. The history of the amendments to the Constitution is, in one sense, a history of the expansion of certain political rights, including voting.

The Founders saw governments as existing to protect natural (or “inalienable”) rights. Natural rights are rights people are born with, and which can be exercised without anyone else taking any action. Examples are freedom of speech and freedom of religious belief. Political rights, such as voting, require positive action on the part of others – if you have a right to vote, then someone else must have the obligation to set up a polling place, count the votes, and do other things to secure that ability.

Many believe they have a constitutional right to vote in our democratic republic, but there is actually no such right listed in the Constitution. Rather, several amendments to the Constitution list conditions that the states cannot use to stop people from voting.

The Constitution may one day be amended to guarantee the right to vote, but the current document only says what the government cannot do to “deny or abridge” your rights.

Women and the Seneca Falls Convention: The Nineteenth Amendment

The first American women’s rights convention was held in 1848 in Seneca Falls, New York. It was organized by Elizabeth Cady Stanton, Lucretia Mott, and others. Frederick Douglass and Sojourner Truth were among the 300 people in attendance.

Women suffragists continued to campaign for the vote and other rights for the next eighty years. During that time, many states approved votes for women at the state level. After the Nineteenth Amendment was ratified in 1920, states could not stop people from voting because they were female.