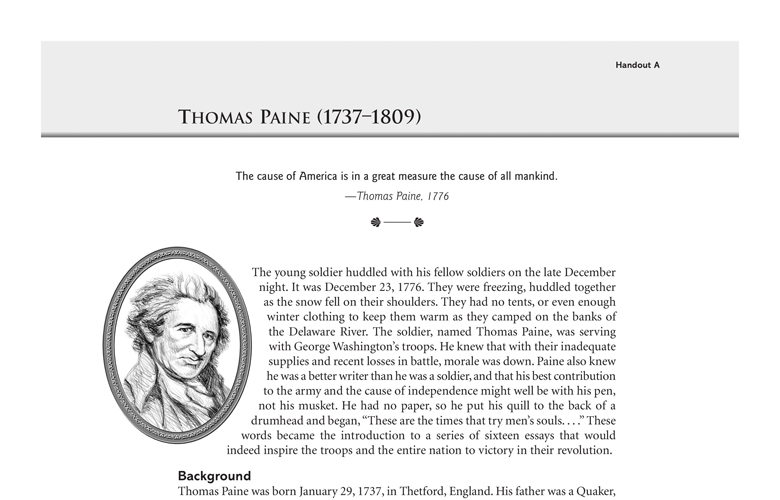 The cause of America is in a great measure the cause of all mankind. – Thomas Paine (1776)

The young soldier huddled with his fellow soldiers on the late December night. It was December 23, 1776. They were freezing, huddled together as the snow fell on their shoulders. They had no tents, or even enough winter clothing to keep them warm as they camped on the banks of the Delaware River. The soldier, named Thomas Paine, was serving with George Washington’s troops. He knew that with their inadequate supplies and recent losses in battle, morale was down. Paine also knew he was a better writer than he was a soldier, and that his best contribution to the army and the cause of independence might well be with his pen, not his musket. He had no paper, so he put his quill to the back of a drumhead and began, “These are the times that try men’s souls. . . .” These words became the introduction to a series of sixteen essays that would indeed inspire the troops and the entire nation to victory in their revolution.

Thomas Paine was born January 29, 1737, in Thetford, England. His father was a Quaker, his mother a member of the Church of England. Paine had little formal education when, as a boy, he went to work for his father, a corset maker. Paine then worked as a tax collector. In 1774 he met Benjamin Franklin, who convinced him to come to America.

Paine arrived in Philadelphia at the end of November 1774. He began work on an anti-slavery essay, African Slavery in America. Paine condemned slavery as a “savage practice” and pointed out the irony that Americans held Africans as slaves and at the same time complained of the British government “enslaving” the colonies. Paine was a member of the first American anti-slavery society, formed in 1775.

The next year Paine wrote an essay condemning Britain’s rule of the American colonies. Common Sense was the best-selling pamphlet of the Revolutionary era, read by as great a proportion of the population as watches the Superbowl today. “I offer nothing more than simple facts, plain arguments, and common sense,” Paine asserted. He rejected the idea that Britain was America’s mother country. British policies violated American liberty and limited the country’s economic prospects. Paine called for independence, and saw the American cause as a part of a worldwide uprising against tyranny.

Some of the political opinions expressed in Common Sense were truly radical. Paine condemned monarchy. He also argued “government even in its best state is but a necessary evil.” He also denounced custom as no more than “a long habit of not thinking a thing wrong.” Paine did not keep the money raised by the sale of his pamphlet. Instead, the money went to the revolutionary cause.

Common Sense helped to persuade many Americans to support independence. During the American Revolution, Paine served in the Continental Army as a soldier. He also composed a series of sixteen essays called The American Crisis. They first appeared at a dark time for the American cause. Paine reminded his countrymen that “the harder the conflict, the more glorious the triumph.”

Paine’s Crisis essays were read around the campfires of the Continental Army. They did much to keep up the morale of the troops. During the war, Paine also served as a secretary for the Continental Congress and as a clerk for the Pennsylvania Assembly

The Rights of Man

Paine returned to England in 1787, where he pursued business interests. Angered by English criticism of the American Revolution, Paine responded in 1791–1792 with The Rights of Man. This work revealed Paine’s devotion to the principles of the Enlightenment. The Enlightenment was an eighteenth-century European intellectual movement. It taught that through scientific and philosophic progress, reason could lead mankind to a state of earthly perfection.

The Rights of Man was the best-selling political essay in eighteenth-century England. Paine dedicated the book to George Washington and scheduled it for publication on Washington’s birthday. In it, Paine argued that all men had an equal claim to political rights and that government depends on the rule of the people. He suggested democratic republics were the remedy for the weaknesses of monarchy. Even more radically, he called for social programs to help the poor.

The Rights of Man’s critique of monarchy was so strong that the British government tried to arrest Paine for the capital crime of “seditious libel” (inciting resistance to the government). But the pamphleteer left for France, as he had taken an interest in the events of the French Revolution.

The Age of Reason

Paine supported the ousting of the French monarchy and the attempt to establish a republic. Paine accepted honorary citizenship in France, and was elected to the French Revolutionary National Assembly. In 1793, he voted against the execution of the French king. Paine spoke out against the act of violent revenge, and pointed out that such punishments were the tactics of cruel monarchs. He urged the king’s exile instead. After the king’s execution, anyone who had voted against the execution was deemed an enemy of the Revolution. Paine was arrested and sentenced to death.

During his imprisonment, Paine completed The Age of Reason. In this controversial work, Paine strongly condemned all organized religion, and in particular Christianity, as a series of “fabulous inventions.” Though he acknowledged all are free to believe as they wish, he declared, “The only true religion is Deism, by which I mean, the belief of one God, and an imitation of his moral character, or the practice of what are called moral virtues.” The Age of Reason was read widely throughout Europe and America.

Paine escaped execution when prison guards did not notice the chalk mark on his door that indicated he was to be sent to the guillotine. His was freed in 1794 through the efforts of the new American minister to the French government. Paine was angry that the American government had not taken action to secure his release sooner. Upon his release, Paine wrote an open letter insulting President George Washington.

Paine remained in France until 1802. He then returned to the United States upon the invitation of President Thomas Jefferson. But Paine soon found that he was unwelcome. His criticism of Christianity and organized religion had led many to wrongly believe he was an atheist, and he faced discrimination because of this misconception. His insulting letter to Washington also created enemies.

Paine died in his sleep in New York City on July 8, 1809 and was buried on his farm in New Rochelle. His funeral was attended by only a few. Ten years later, his remains were moved to England, and later lost.