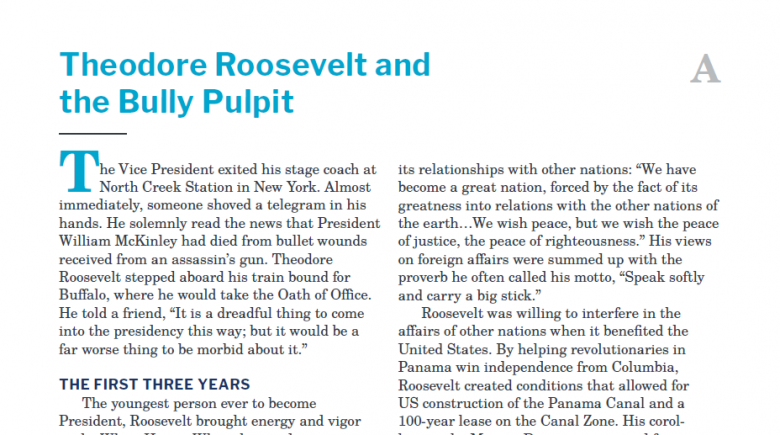 Theodore Roosevelt and the Bully Pulpit

The Vice President exited his stage coach at North Creek Station in New York. Almost immediately, someone shoved a telegram in his hands. He solemnly read the news that President William McKinley had died from bullet wounds received from an assassin’s gun. Theodore Roosevelt stepped aboard his train bound for Buffalo, where he would take the Oath of Office. He told a friend, “It is a dreadful thing to come into the presidency this way; but it would be a far worse thing to be morbid about it.”

The youngest person ever to become President, Roosevelt brought energy and vigor to the White House. Where his predecessors had been reserved and cautious, Roosevelt was outspoken and unabashed. He was excited by the chance he had to use what he called the “bully pulpit” (“bully” meaning “wonderful” and “pulpit” meaning “a preaching position”) to spread his ideas, to persuade, and to change. He said famously: “I suppose my critics will call that preaching, but I have got such a bully pulpit!” His use of the bully pulpit contributed to the greatest expansion of federal power in the country’s history to that time.

Roosevelt spoke boldly in his first message to Congress. He believed monopolies damaged the general welfare and called for the creation of a new executive department to monitor big corporations, called trusts. The Department of Labor and Commerce was created in response to this call in 1903.

Roosevelt was elected President in 1904 with the greatest popular majority to that point. In his inaugural address he expressed his “fixed determination to show that under a free government a mighty people can thrive best.” One way the US could “show” the world was through its relationships with other nations: “We have become a great nation, forced by the fact of its greatness into relations with the other nations of the earth…We wish peace, but we wish the peace of justice, the peace of righteousness.” His views on foreign affairs were summed up with the proverb he often called his motto, “Speak softly and carry a big stick.”

Roosevelt was willing to interfere in the affairs of other nations when it benefited the United States. By helping revolutionaries in Panama win independence from Columbia, Roosevelt created conditions that allowed for US construction of the Panama Canal and a 100-year lease on the Canal Zone. His corollary to the Monroe Doctrine prevented foreign bases from being established in the Caribbean. Demonstrating to the world that the US was a great naval power, he sent the Great White Fleet around the world. In 1905, he helped negotiate an end to the Russo-Japanese War. This achievement won Roosevelt the Nobel Peace Prize.

The Bully Pulpit at Home

At home, Roosevelt expanded the federal government’ ability to acquire land. He signed laws establishing five national parks. He broadened executive power by signing the Antiquities Act in 1906. This law gave the president the power to proclaim historic landmarks, structures, and other objects of historic or scientific interest as national monuments. He interpreted this law broadly, and by the end of his term had reserved eighteen areas in this manner. Later presidents claimed 105 areas under the Antiquities Act, forty-nine of which remain so designated today.

Roosevelt used the bully pulpit to persuade Congress that “the great development of industrialism means that there must be an increase in the supervision exercised by the government over business enterprise.” Explaining his fight for a “square deal” for Americans, he used authority under the Sherman Anti-Trust Act to take on powerful consolidated companies. He worked to protect companies from extreme demands from labor unions. He urged federal lawmakers to enact legislation protecting workers, including child labor laws and a bill providing workmen’s compensation for all federal employees. He proposed laws regulating the nation’s food supply. In response, the Pure Food and Drug Act of 1906 was passed, paving the way for the Food and Drug Administration (FDA).

Historians note that Roosevelt’s efforts to curb corporate power did not mean he was against capitalism. Roosevelt was a capitalist. But he tried to curb what he saw as the excesses of capitalism so that socialism—on the rise around the world—would not take root in the United States. His proposals moved Congress to act.

Roosevelt gave a broad interpretation to the opening words of Article II—vesting the “executive power” of the United States in the President— and his oath of office. The President is not a lawmaker. The Constitution permits him or her only to “recommend measures” to Congress for their consideration. Roosevelt sent more than 400 messages to Congress. Roosevelt seized these and other opportunities to accentuate the leadership responsibilities of the President.

Roosevelt was criticized for many of his actions. Some disapproved of his turning the US into an international police power. Some condemned his decision to send the Great White Fleet around the world, arguing that he forced Congress’s hand to spend the money needed for this endeavor. Many charged that the many regulatory agencies he proposed threatened liberty. President William Howard Taft, who succeeded Theodore Roosevelt as President in 1916, said that Roosevelt’s view of “ascribing an undefined … power to the President” was “an unsafe doctrine,” that could do permanent “injustice to private right.” Some later historians have called Roosevelt an activist president, because of the way his actions increased the power of the federal government over states and individuals’ lives.