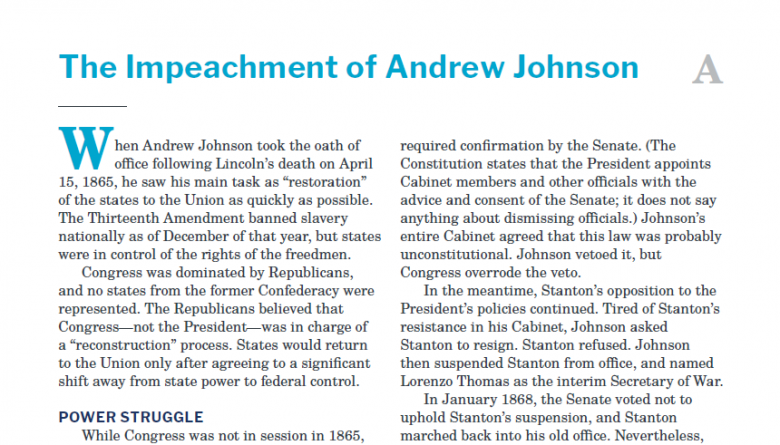 When Andrew Johnson took the oath of office following Lincoln’s death on April 15, 1865, he saw his main task as “restoration” of the states to the Union as quickly as possible. The Thirteenth Amendment banned slavery nationally as of December of that year, but states were in control of the rights of the freedmen.

Congress was dominated by Republicans, and no states from the former Confederacy were represented. The Republicans believed that Congress—not the President—was in charge of a “reconstruction” process. States would return to the Union only after agreeing to a significant shift away from state power to federal control.

While Congress was not in session in 1865, Johnson moved forward, quickly restoring the Southern states to the Union based mainly on their ratification of the Thirteenth Amendment which banned slavery. However, Congress refused to seat the legislators who had been elected in the restored states. This was because they were former Confederate leaders from states that had passed “black codes” that practically re-enslaved blacks.

Congress passed a number of laws protecting freedmen and restricting the powers of the states. Johnson vetoed them, and Congress overrode the vetoes. The growing tension between Johnson and Congress was reflected in Johnson’s Cabinet. (Most of the cabinet members had been appointed by Lincoln.) One of the most influential cabinet members was Secretary of War Edwin Stanton, who strongly opposed Johnson’s lenient approach toward the South.

In February 1867, Congress passed the Tenure of Office Act. This law required the President to seek the Senate’s approval before removing an official whose appointment had required confirmation by the Senate. (The Constitution states that the President appoints Cabinet members and other officials with the advice and consent of the Senate; it does not say anything about dismissing officials.) Johnson’s entire Cabinet agreed that this law was probably unconstitutional. Johnson vetoed it, but Congress overrode the veto.

In the meantime, Stanton’s opposition to the President’s policies continued. Tired of Stanton’s resistance in his Cabinet, Johnson asked Stanton to resign. Stanton refused. Johnson then suspended Stanton from office, and named Lorenzo Thomas as the interim Secretary of War.

In January 1868, the Senate voted not to uphold Stanton’s suspension, and Stanton marched back into his old office. Nevertheless, the President sent Stanton a message removing him from office again, and advised the Senate that he had done so. Stanton barricaded himself in his office at the War Department, where he remained for several months. Armed volunteers moved in to the basement of the building, taking turns to be sure that Stanton would not be removed by force. The Republicans accelerated their efforts, and on February 24, 1868, the House passed the Impeachment Resolution.

The impeachment trial before the Senate began on March 30, 1868. The President’s defense team made the following points:

The President’s accusers made the following main points:

Otherwise, a President could routinely frustrate the will of the people as expressed by their elected representatives.

Thirty-five Senators voted to convict Johnson, and nineteen voted to acquit. This was one vote short of the two-thirds majority that the Constitution requires to remove a President from office. President Johnson served the remaining ten months of his term as President. He continued to veto bills that he saw as unconstitutional, but he enforced the laws when passed. Congress continued to override the vetoes.

When Johnson died of a stroke on July 31, 1875, he was buried as he had requested, wrapped in a US flag, with his head resting on his copy of the US Constitution.

The Tenure of Office Act was largely repealed in 1887, and its principles were declared unconstitutional by the Supreme Court in 1926.