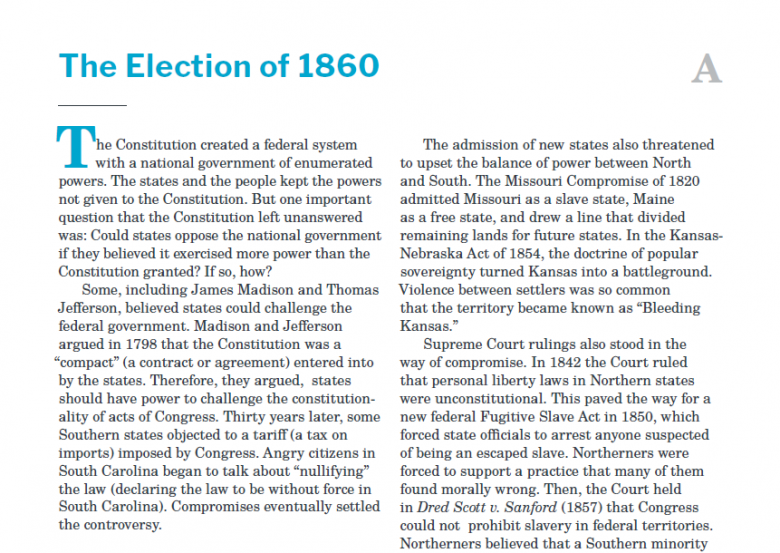 Some, including James Madison and Thomas Jefferson, believed states could challenge the federal government. Madison and Jefferson argued in 1798 that the Constitution was a “compact” (a contract or agreement) entered into by the states. Therefore, they argued, states should have power to challenge the constitutionality of acts of Congress. Thirty years later, some Southern states objected to a tariff (a tax on imports) imposed by Congress. Angry citizens in South Carolina began to talk about “nullifying” the law (declaring the law to be without force in South Carolina). Compromises eventually settled the controversy.

Debates about the Constitution and slavery continued. Northerners resented the three-fifths compromise, which allowed Southern states to count three-fifths of their slave populations for representation in Congress. More troublesome was the Constitution’s Fugitive Slave Clause, which said states could not harbor escaped slaves. Many Northern states passed state “personal liberty” laws that interfered with enforcement of federal fugitive slave laws. Finally, Congress banned the importation of slaves as soon as the Constitution allowed in 1808. But by the late 1850s some Southerners were calling for the re-opening of the slave trade.

The admission of new states also threatened to upset the balance of power between North and South. The Missouri Compromise of 1820 admitted Missouri as a slave state, Maine as a free state, and drew a line that divided remaining lands for future states. In the Kansas-Nebraska Act of 1854, the doctrine of popular sovereignty turned Kansas into a battleground. Violence between settlers was so common that the territory became known as “Bleeding Kansas.”

Supreme Court rulings also stood in the way of compromise. In 1842 the Court ruled that personal liberty laws in Northern states were unconstitutional. This paved the way for a new federal Fugitive Slave Act in 1850, which forced state officials to arrest anyone suspected of being an escaped slave. Northerners were forced to support a practice that many of them found morally wrong. Then, the Court held in Dred Scott v. Sanford (1857) that Congress could not prohibit slavery in federal territories. Northerners believed that a Southern minority was going to impose slavery on the unwilling majority. The prospect of civil war was on the horizon.

A new political party, the Republican Party, was formed in 1854. The Republican Party had two defining features: it opposed slavery, and it was only in the North. These two features prompted Southerners to worry about their place in the Union. One Southern pamphleteer complained that the Republican Party “exists only in the Northern states, and for the first time in our history a partisan organization, exclusively and intensely sectional, has obtained ascendency in our Government. …In the South it has no practical existence. …The bond of brotherhood between the North and the South, so far as political parties are concerned, is broken. Where is the security of the South, and what is her position in the Union? If history furnishes any lessons of wisdom or experience, she must rely upon herself for protection and safety.”

Southerners hardened their position in response to the perceived threat of the Republican Party, causing a split in the Democratic Party. Democrats split their votes and Abraham Lincoln won the election of 1860 with 180 (out of 303) electoral votes. He won barely forty percent of the popular vote. He was not on the ballot in ten Southern states.

Citing arguments that the Constitution was a compact among the states, Southern states took steps to withdraw from that compact. South Carolina’s Declaration of Secession cited the Declaration of Independence, stating that “whenever any form of government becomes destructive of the ends for which it was established, it is the right of the people to alter or abolish it, and to institute a new government.”

South Carolina believed secession was justified and each state could judge on its own whether the federal government had failed to live up to its purposes, but Lincoln believed otherwise. He believed the union of states created by the Constitution was perpetual. He asked in his First Inaugural Address, “If the United States be not a government proper, but an association of States in the nature of contract merely, can it, as a contract, be peaceably unmade by less than all the parties who made it? One party to a contract may violate it—break it, so to speak—but does it not require all to lawfully rescind it?” A portion of the people, he said, could not destroy what the whole people had created.

Claiming that the Northern states had repeatedly tried to deny the Southern states their constitutional right to slavery, South Carolina declared that their relationship to the Union was dissolved. Before Lincoln was inaugurated as President, seven Southern states seceded from the Union. These states created their own nation, the Confederate States of America (CSA). Lincoln, however, never acknowledged the CSA as a nation, instead considering the seceded states to be in rebellion.

In the growing strife, Confederate troops fired on Ft. Sumter, a federal fort in South Carolina. Four more states seceded. The transfer of power was not peaceful, and the nation divided was now at war against itself.