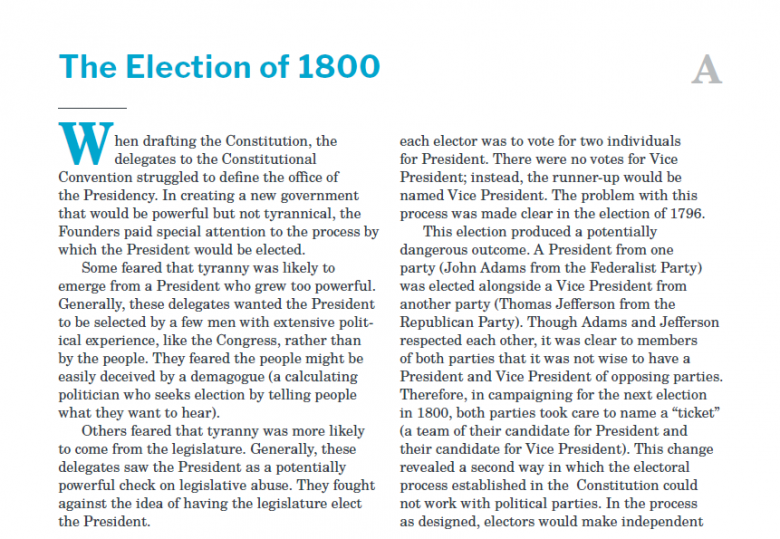 When drafting the Constitution, the delegates to the Constitutional Convention struggled to define the office of the Presidency. In creating a new government that would be powerful but not tyrannical, the Founders paid special attention to the process by which the President would be elected.

Some feared that tyranny was likely to emerge from a President who grew too powerful. Generally, these delegates wanted the President to be selected by a few men with extensive political experience, like the Congress, rather than by the people. They feared the people might be easily deceived by a demagogue (a calculating politician who seeks election by telling people what they want to hear).

As an alternative to popular election and election by the legislature, the delegates agreed to create a body of electors who would select the President. The Electoral College would allow a small number of leading citizens, chosen by the people of their state on the basis of their special knowledge of the candidates, wisdom, and experience, to elect the President. The Founders concluded that this process would make it most likely that the best candidates were elected, and not simply those candidates who appealed to narrow personal or partisan interests.

Political Parties and the Electoral Process

The system was not without its flaws. Two parts of the process were particularly troublesome. First, according to the Constitution, each elector was to vote for two individuals for President. There were no votes for Vice President; instead, the runner-up would be named Vice President. The problem with this process was made clear in the election of 1796.

This election produced a potentially dangerous outcome. A President from one party (John Adams from the Federalist Party) was elected alongside a Vice President from another party (Thomas Jefferson from the Republican Party). Though Adams and Jefferson respected each other, it was clear to members of both parties that it was not wise to have a President and Vice President of opposing parties. Therefore, in campaigning for the next election in 1800, both parties took care to name a “ticket” (a team of their candidate for President and their candidate for Vice President). This change revealed a second way in which the electoral process established in the Constitution could not work with political parties. In the process as designed, electors would make independent decisions about which candidates to write into their ballots. With the appearance of political parties and presidential tickets, however, electors were expected to be “faithful” to their party’s ticket, or to follow the party line. This is exactly what happened in the election of 1800. The Republican Party candidate, Thomas Jefferson, was named on the ballot of all Republican electors. Jefferson’s Vice Presidential candidate, Aaron Burr, was also named on the ballots of all Republican electors. In other words, the election of 1800 had ended in a tie.

The fact that it was a tie between candidates the Republican Party had selected for President and Vice President did not matter under the Constitution. All that mattered was that the Electoral College did not produce a winner. According to the Constitution, it was up to the House of Representatives to resolve this tie with each state having one vote.

Many in the Federalist Party despised Thomas Jefferson, and they did their best to prevent Jefferson from taking the Presidency. For a full week after electoral ballots were counted, the House of Representatives took vote after vote to settle the election. Through thirty-five rounds of voting, the House found itself in a deadlock. On the thirty-sixth ballot, a handful of Federalists who had been casting ballots against Jefferson decided to abstain, leaving Jefferson ahead on ten ballots, to Burr’s four, with two states abstaining. Jefferson was finally named President, and Aaron Burr Vice President, just as the Republican Party had intended.

After this hotly contested election battle was concluded, President Jefferson made an effort to reconcile the opposing sides. In his Inaugural Address, he observed the great differences of opinion that divided Federalists from Republicans. But he also noted that “every difference of opinion is not a difference of principle. We have called by different names brethren of the same principle. We are all Republicans, we are all Federalists.”

But calls to support the Constitution may begin to sound insincere if the electoral process frequently produces contested election results. To minimize the danger of another deadlock, Congress passed the Twelfth Amendment to the Constitution in 1803; the states ratified the amendment in 1804. This amendment required each elector to cast one vote for President and one vote for Vice President. Since that time, political parties have solidified their role in nominating candidates for President and Vice President.

Devotion to the Constitution and the rule of law despite our political differences are important reasons why Americans are able to peacefully transfer power from one President and one party to another.