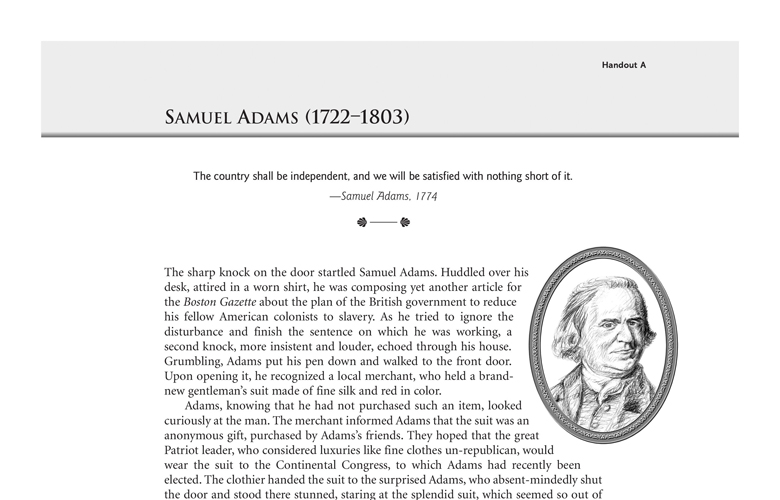 The country shall be independent, and we will be satisfied with nothing short of it – Samuel Adams (1774)

The sharp knock on the door startled Samuel Adams. Huddled over his desk, attired in a worn shirt, he was composing yet another article for the Boston Gazette about the plan of the British government to reduce his fellow American colonists to slavery. As he tried to ignore the disturbance and finish the sentence on which he was working, a second knock, more insistent and louder, echoed through his house. Grumbling, Adams put his pen down and walked to the front door. Upon opening it, he recognized a local merchant, who held a brand new gentleman’s suit made of fine silk and red in color.

Adams, knowing that he had not purchased such an item, looked curiously at the man. The merchant informed Adams that the suit was an anonymous gift, purchased by Adams’s friends. They hoped that the great Patriot leader, who considered luxuries like fine clothes un-republican, would wear the suit to the Continental Congress, to which Adams had recently been elected. The clothier handed the suit to the surprised Adams, who absent-mindedly shut the door and stood there stunned, staring at the splendid suit, which seemed so out of place in his modest home.

Samuel Adams was born on September 22, 1722, in Quincy, Massachusetts. He entered Harvard College at the age of fourteen. After graduating from Harvard, he began to study law but soon turned to a career in business instead. When Adams’s father died in 1748, he took over the family brewery. But Adams was a poor manager, and the brewery went bankrupt. Adams next took a job as a colonial tax collector, but he failed in this position too.

The Rights of the Colonists

During the 1760s, Adams became a leader of the Patriot resistance to the British government’s attempt to tax the American colonies. With John Hancock and James Otis, Adams organized the Sons of Liberty. This group worked to oppose the new taxes enacted by the royal governor of Massachusetts, Thomas Hutchinson. The Sons of Liberty took the lead in opposing the Stamp Act of 1765 and the Townshend Duties of 1767. Soon Adams had become famous throughout the colony and beyond.

In defending the liberty of his fellow colonists, Adams appealed to both natural and English rights. In 1768, Adams authored “Resolutions of the Boston Town Meeting.” In this document, he argued that the law of nature dictated that “no law of the society can be binding on any individual without his consent, given by himself in person, or by his representative of his own free election.” The colonists of Massachusetts, Adams held, were not represented in Parliament. Therefore, the British government could not tax them. Adams also argued that the colonists by English law were entitled to “all liberties and immunities of free and natural subjects” of England. Adams’s arguments helped spark the rallying cry of “No taxation without representation.”

In 1772, Adams composed a pamphlet entitled “The Rights of the Colonists.” In this essay, Adams again appealed to the idea of natural rights. Adams claimed that the American colonists were “entitled, to all the natural, essential, inherent, and inseparable rights, liberties, and privileges of subjects born in Great Britain.” Though Adams did not go so far as to call for American independence outright, he asked frankly,“how long such treatment will or ought to be borne.”

In 1772, Samuel Adams helped to organize Committees of Correspondence across Massachusetts. These formed a network that coordinated resistance to British rule. The following year, Adams obtained letters written by Governor Hutchinson that asked the British government to crack down on the American resistance. Adams published the letters. The governor was furious.

When Parliament passed the Tea Act in 1773, which lowered the price of British tea, thereby undercutting American merchants and smugglers, Adams organized the Boston Tea Party. This was a nighttime raid in which some one hundred fifty members of the Sons of Liberty, disguised as Native Americans, boarded a docked merchant ship and threw three hundred forty-two chests of British tea into Boston harbor. The water in the harbor was brown for days afterward.

In response to the Boston Tea Party, the British Parliament passed the Coercive Acts as punishment for the action of the Bostonians. Adams countered with a letter in which he called for Americans to unite “in opposition to this violation of the liberties of all.”

The Call for Independence

Hutchinson was recalled to England in 1774. General Thomas Gage became governor of Massachusetts. Gage offered pardons to all members of the American resistance in Boston, except Adams and Hancock. In 1775, Adams and Hancock narrowly escaped arrest, and certain trial for treason, as British troops marched to Lexington.

Adams was elected to the Continental Congress in 1774. In that body he became a champion of American independence. “I am perfectly satisfied,” he wrote in April of 1776, “of the necessity of a public and explicit declaration of independence.” In a speech to the Congress after independence was declared, Adams expressed his hope that the country would forever be an “asylum on earth for civil and religious liberty” and “never cease to be free and independent.” Adams proudly affixed his name to Congress’ Declaration of Independence

Service to State and Nation

Adams served on the committee that drafted the new Massachusetts Constitution of 1780. As a member of the Continental Congress, he also helped write and signed the Articles of Confederation.

Adams did not attend the Constitutional Convention of 1787. He rejected the purpose of the Convention, which was to strengthen the central government. Adams feared that a stronger government would infringe on the people’s liberty.

Though he attended the Massachusetts ratification convention in 1788, Adams took little part in the debates. His silence could be attributed to the grief he felt at the death of his son that year. He also felt little sympathy for either of the two parties in the contest, the Federalists and the Anti-Federalists. Adams eventually supported the Constitution after the Bill of Rights was added.

Adams served as lieutenant governor of Massachusetts from 1789 to 1793. He then succeeded his friend Hancock as governor of the state. In 1797, Adams retired to his home. As the eighteenth century came to a close, he worried that the old republican spirit of virtuous self-sacrifice for the common good was passing away and that the federal government was growing too strong. Adams, one of the last of the “old republicans,” died on October 2, 1803