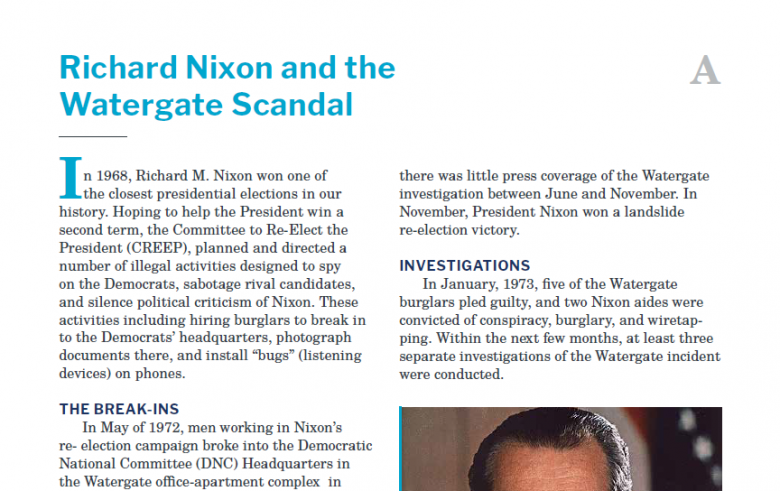 In 1968, Richard M. Nixon won one of the closest presidential elections in our history. Hoping to help the President win a second term, the Committee to Re-Elect the President (CREEP), planned and directed a number of illegal activities designed to spy on the Democrats, sabotage rival candidates, and silence political criticism of Nixon. These activities including hiring burglars to break in to the Democrats’ headquarters, photograph documents there, and install “bugs” (listening devices) on phones.

election campaign broke into the Democratic National Committee (DNC) Headquarters in the Watergate office-apartment complex in Washington, DC About three weeks later, burglars went back to the DNC to repair some of the phone taps. The security guard, seeing that the doors had been tampered with, called the police. The five burglars, wearing business suits, blue surgical gloves, and surrounded by electronic equipment, were caught in the act and arrested at 2:30 a.m. Among the burglars’ belongings were found crisp, sequentially-numbered $100 dollar bills and an address book containing the contact information for some members of CREEP.

Nixon’s closest advisors met to discuss how to distance the President from this criminal activity. They knew that any investigation of the Watergate burglary would lead to disclosure of other illegal operations that had been carried out by Nixon supporters. These illegal operations included bribery, obstruction of justice, destruction of evidence, use of the CIA and FBI for political purposes, illegal campaign contributions, and others. An FBI study established that the Watergate break-in was part of a massive campaign of political spying and sabotage, but there was little press coverage of the Watergate investigation between June and November. In November, President Nixon won a landslide re-election victory.

In January, 1973, five of the Watergate burglars pled guilty, and two Nixon aides were convicted of conspiracy, burglary, and wiretapping. Within the next few months, at least three separate investigations of the Watergate incident were conducted.

The White House issued a statement that the President had no prior knowledge of the break- in. Nixon himself maintained he knew nothing of a cover-up. But the investigation began to show otherwise. White House Counsel John Dean told investigators that he had had at least thirty-five discussions with Nixon about the Watergate cover-up. The President, Dean said, had not taken the appropriate steps to bring guilty parties to justice. Nixon maintained that he knew nothing about a cover-up, saying, “Not only was I unaware of any cover- up, but … I was unaware of anything to cover up.” It was John Dean’s word against the President’s.

The White House stated that it would cooperate with the investigation, but Nixon refused to testify before the Senate committee or to turn over documents it had requested.

Nixon claimed that executive privilege guaranteed him confidentiality. Executive privilege is not mentioned in the Constitution, but Presidents since George Washington have maintained that the separation of powers doctrine gives them the right to keep certain information secret.

Then came a stunning revelation. The Senate Committee learned that Nixon had a secret, voice-activated recording system in each of his offices. Every conversation in these offices since 1971 had been recorded. Both the Senate committee and Special Prosecutor asked Nixon for the audio tapes, but Nixon refused to hand them over. He argued that they also were protected by executive privilege. The battle for the tapes continued for the next year between investigators and President Nixon. In October, Nixon began to hand over typed transcripts of parts of some tapes.

In February 1974 the House of Representatives began an impeachment inquiry. By the end of April, Nixon still refused to release the tapes themselves, but announced in a televised address that he would release more edited transcripts.

Impeachment hearings began before the House Judiciary Committee in May. On July 24, the Supreme Court ordered Nixon to make the tapes available. In United States v. Nixon, the unanimous opinion of the Court was that, while executive privilege was an important and legitimate principle, “the generalized assertion of privilege must yield to the demonstrated, specific need for evidence in a pending criminal trial.”

Nixon’s impeachment by the House and conviction by the Senate were assured. In August, Nixon released what came to be known as the “Smoking Gun” tape, which proved that Nixon had participated in a cover-up of the Watergate burglary and other illegal activities at least since June 23, 1972—six days after the burglary. Nixon resigned on August 9, 1974, making Gerald Ford the thirty-eighth President.

Among the Watergate casualties were forty government officials indicted or jailed, a presidency that ended in disgrace, and a far-reaching loss of trust by the American people in their President.

However, the Watergate scandal and investigations also demonstrated the importance of a free press, and the Founders’ wisdom in setting up the complex system of checks and balances. Americans’ commitment to the rule of law ensures that that no one, not even the President, is above the law.