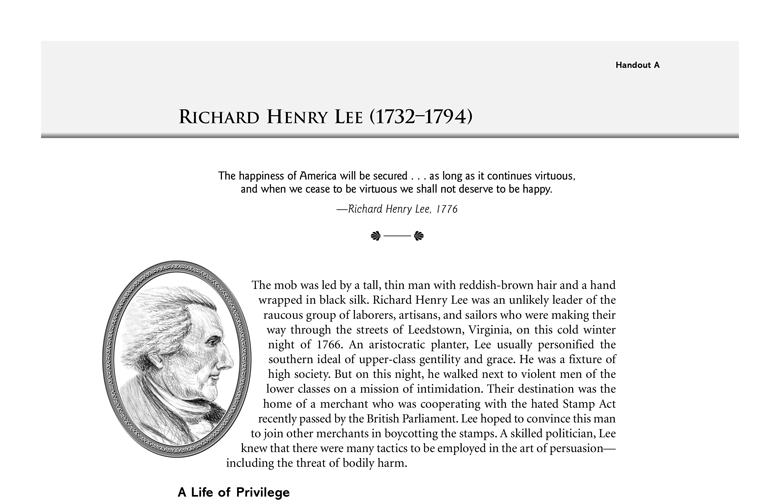 The happiness of America will be secured . . . as long as it continues virtuous, and when we cease to be virtuous we shall not deserve to be happy – Richard Henry Lee (1776)

The mob was led by a tall, thin man with reddish-brown hair and a hand wrapped in black silk. Richard Henry Lee was an unlikely leader of the raucous group of laborers, artisans, and sailors who were making their way through the streets of Leedstown, Virginia, on this cold winter night of 1766. An aristocratic planter, Lee usually personified the southern ideal of upper-class gentility and grace. He was a fixture of high society. But on this night, he walked next to violent men of the lower classes on a mission of intimidation. Their destination was the home of a merchant who was cooperating with the hated Stamp Act recently passed by the British Parliament. Lee hoped to convince this man to join other merchants in boycotting the stamps. A skilled politician, Lee knew that there were many tactics to be employed in the art of persuasion— including the threat of bodily harm.

A Life of Privilege

Richard Henry Lee was born in 1732 at Stratford Hall Plantation in Westmoreland County, Virginia. The Lees were one of the wealthiest and most powerful families in Virginia. The eldest of four sons, Lee was first taught by tutors and then sent to England to finish his education. Returning home in 1752, he purchased land from his brother in Westmoreland County and there built his plantation home, which he named “Chantilly.” Lee studied law and was elected to the House of Burgesses at the age of twenty-five.

In the House of Burgesses, Lee became an outspoken opponent of the international slave trade. His first official act was to introduce a bill that proposed “to lay so heavy a duty on the importation of slaves as to put an end to that iniquitous and disgraceful traffic within the colony of Virginia.” Though other slaveholders also opposed importation, few condemned the institution of slavery itself, as Lee did. Blacks, Lee declared, were “equally entitled to liberty and freedom by the great law of nature.” He warned that slaves would rebel if they “observed their masters possessed of a liberty denied to them.”

Nevertheless, Lee did not free any of his slaves. Indeed, he simply could not afford to do so. Lee earned much of his income by renting his slaves to other planters and by buying and selling them. “I do not see how I could in justice to my family refuse any advantages that might arise from the selling of them,” Lee explained.

Lee’s radical nature was evident in his political views also. In the 1760s, he assumed a leading role in opposing British policies toward America. Lee founded the Westmoreland Association in opposition to the Stamp Act of 1765. This body organized boycotts of British goods and harassed royal officials who attempted to enforce the Stamp Act. Lee was one of the first Patriots to call for independence. He condemned the Townshend Acts of 1767 as “destructive of that mutual beneficial connection which every good subject would wish to see preserved.”

Lee understood Virginia could not stand on her own in defiance of British policies. In 1773, he organized the Virginia Committee of Correspondence as a way to exchange information with Patriot leaders in other colonies. He also received regular information about events in England from his two brothers living in London.

In 1774, Lee was elected to represent Virginia at the First Continental Congress in Philadelphia. There he tried to persuade other members of the need for American independence. In the Congress, Lee played a vital role in uniting American opposition in the North and South. He became a good friend of Samuel Adams, one of the most prominent Patriot leaders in Boston.

Though the First Congress did not go so far as to declare American independence, Lee did not give up. In 1776, he was chosen a member of the Second Continental Congress. On June 7, Lee introduced a resolution that declared “that these United Colonies are, and of right ought to be, free and independent States.” This led to the drafting of the Declaration of Independence. Lee’s resolution was adopted by Congress on July 2, 1776.

Lee stayed in Congress through 1779, helping guide the nation through the first years of the Revolution. He then returned home to Virginia, where he served in the state legislature. In 1781, the Articles of Confederation, which set up a government for the new nation, went into effect. Lee at first turned down the offer to serve in the new Congress. He believed that he owed service to his state first. But in 1784, he accepted a seat in the national Congress and served as that body’s president his first year as a member.

During the 1780s, Lee became concerned that Americans were losing their republican virtue—defined as self-sacrifice for the public good—and their love of liberty. Instead, Lee worried, people were more concerned about amassing money and power. When some leading Americans called for revising the Articles of Confederation so as to strengthen the national government, Lee was alarmed. He feared that these men craved power for themselves at the expense of the people’s liberty.

Lee therefore refused to take part in the Constitutional Convention of 1787. He also tried to persuade delegates to the convention not to alter the Articles. Despite his warnings, the delegates at Philadelphia designed an entirely new system of government. When the Constitution was sent to the states for approval, Lee became a leader of the opposition to ratification in Virginia.

In the essays, the Farmer criticized the Constitution’s centralization of powers in the federal government and its lack of a bill of rights. He warned that the Constitution would destroy the states and create a “consolidated” government in which all power was dangerously concentrated in one place. The Farmer instead hoped to preserve a federal system, in which power was divided between the national and state governments. He hoped that a second convention could be organized to revise the Constitution.

Despite Lee’s opposition, the Constitution was approved by the requisite nine states by the end of June 1788. Lee was disappointed. Hoping to protect the people’s liberty, however, he accepted a Senate seat in the first Congress under the Constitution. He spent his time in Congress advocating laws and amendments that would limit the power of the new government. Lee was a leading supporter of the first ten amendments to the Constitution, which were ratified in 1791 and became known as the Bill of Rights.

Poor health forced Lee to retire from public life and return to Chantilly in 1792. Lee was pessimistic about the prospects of the United States. He feared that desire for wealth and power had replaced republican virtue among many of his countrymen, especially in his own beloved Virginia.“The hasty, unpersevering, aristocratic genius of the south suits not my disposition,” Lee wrote, “and is inconsistent with my ideas of what must constitute social happiness and security.” He even once considered retiring to Massachusetts. But Lee never left Virginia. He died at Chantilly in 1794 at the age of sixty-two.